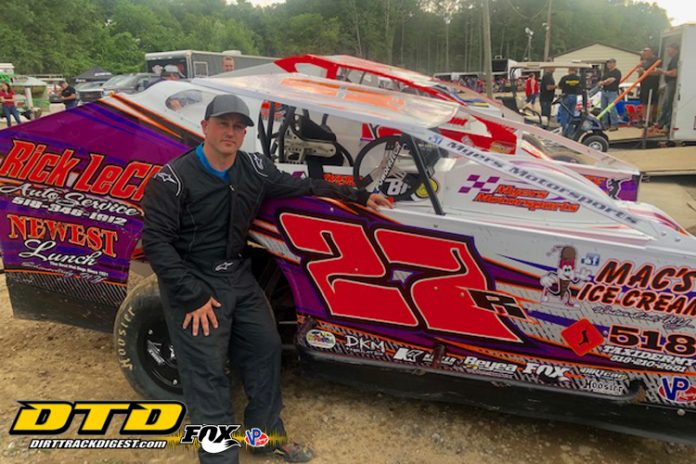 Friday at Albany-Saratoga we saw a great looking No. 27R and stopped in the pit area to talk with Randy Myers and learned a few things about one of the many competitors at the “Great Race Place”. There was a DKM sticker on Randy’s Limited Sportsman and he said that the team at DKM had made the body, with the stipulation that it be done before the team left for Florida in February. DKM came through and Randy was pleased with what they did. Before taking a number of years off, he raced go-karts when he was 18 at Dodge City, Caroga Creek and Tampa Florida. A year ago a friend asked if he would be willing to drive his race car and the bug bit Randy once again and he is now racing at age 42. Randy enjoys being back and on Friday he came to the track with his one woman pit crew, his girlfriend, Andrea Johnson. Andrea says she is happy spending Friday evenings in the pits at Albany-Saratoga. Later in the evening while watching the Street Stock feature we noticed a No. 21 painted like a former Wood Brothers Cup car so after the race we ventured into the pits to talk with the driver, Jody Thew who has been racing since 2012 when he was rookie of the year. Jody is 48 years old and we asked him about a memorable moment in racing for him. He said in one race at Fonda he went into the catch fence nearly two stories up and he could see the eyes of the fans in the stands. “You have good nights and bad nights, said Jody and that was one of the bad ones”. He moved on after that night and is happy to still be racing. We also ran into three of the good guys from our sport, Jack Cottrell and the Ballestero brothers, Mike and Tony. The three share some great history in local dirt track racing and it’s great to talk with them. Jack was honored at Fonda on Saturday night by the track and the Mohawk Valley Vintage Dirt Modifieds club and because we arrived late we missed much of the ceremony. Our first stop when we got to Fonda was the pit concession stand where we saw a young man eating his race track dinner and realized he was with the No. 69 Sportsman car. We certainly recognized that number from the past and the reason, the driver, Travis Green is Robbie’s son. We walked back to his pit area with him to meet his father who was there to help him. The Green team was at Fonda for the first time on Saturday, Travis has only been racing two years and is a regular at Accord. The team was at Fonda to get a feel for the track and set up for the Short Track Super Series event that will be a part of the Firecracker 50 special event on July 3 at the track. The Sportsman event that night pays $2000 to win. Travis had been out for warmups and said that Fonda differs from what he runs regularly. We were glad to see and talk with the Greens and look for their return on July 3 and hopefully a few more times on a Saturday night.


Saturday evening we went into the covered grandstands and ran into a group of young Amish. In talking with them we learned they had been to the Fonda Fair but never the races at the fairgrounds. It was their first time ever at the races and they were really enjoying themselves and said they look forward to returning. We respected their request not to take any photos of them. If the announcers need to know any statistics for Fonda they only need to ask the “stat man” Ron Szczerba who sits in the tower each week ready to answer their questions. Ron has been keeping the Fonda records for nearly 20 years and is very serious about his work. He wants his records to be right and he strives to make that happen for everyone involved. Prior to his involvement at Fonda Ron wrote racing columns for The Recorder in Amsterdam, Dailey Gazette in Schenectady and Redline Magazine. He has been a member of local racing media for over 20 years, beginning his career when Ralph Compani was at the helm at Fonda. He is now a dedicated part of the Fonda team under new promoter, Brett Deyo. On Sunday at Glen Ridge we ran into another one of the Green family racing team. Randy Green, older son of Robbie Green has been wheeling a race car for six years and has been to Glen Ridge five or six times and says he loves it because he loves the smaller ovals. Randy finished fifth in both Modified events, showing that he is a very consistent racer. When it was learned that Rocky Warner was moving up to Modifieds for the 2018 season many wondered how someone that had been successful in all the other divisions he’d raced, won many titles in the Sportsman and a number of races all over New York, would fare with the big dogs in the Modified ranks. Rocky was chosen to drive the powerful Jake Spraker No. 1J, that had been vacated by Ronnie Johnson. After winning nearly 30 races per year in Sportsman, Rocky came home with two wins, one at Fonda and one at Glen Ridge in Modifieds his first year. Over the winter the rumors started that Rocky would return to Sportsman for 2019 and Jake would no longer field a Modified. Well, now two months into the season and Rocky in Jake’s Modified No. 1J has ten victories, three at Fonda and seven at Glen Ridge and has been knocking on the door of victory lane at Albany Saratoga each week. What a difference a year makes, but no one should be surprises. Rocky has won in ever division he’s raced in over his career.

We’re headed to the Big Show 11 Tuesday at Albany Saratoga and look forward to this Saturday at Fonda, the Bill Ag Match Race and Hondo Classic for $5.00 admission. Then next Wednesday, July 3, the Firecracker 50 takes to the track at Fonda. Should be an exciting week of racing.