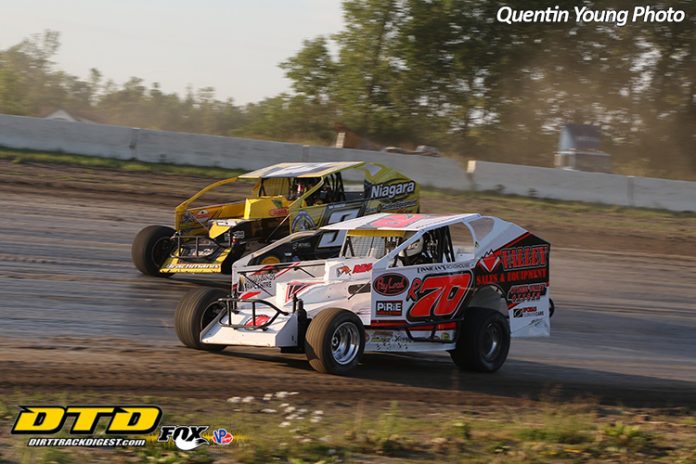 Ryan Arbuthnot has set some goals for himself when the season started.

Prior to the 358 series opener at Can-Am the Renfrew, Ont., resident talked with DTD about what has been accomplished and what he hopes to achieve moving forward.

“We might have to reset our goals,” said Ryan, “as we already have hit them. I would like, however, to win a 100-lap event or a series race.”

The season has gotten off to a quick start as he explained, “We have new equipment. Brockville is our home track, but early in the season when weather cancelled Brockville we went to Fulton and finished fourth both weeks. We started outside the top ten there both nights and the car just got better and better.”


Continuing he said, “I really think we finally have our program figured out and already this year we’ve won three of four features at Brockville. We are getting closer here (Can-Am). Our momentum is just picking up.”

Arbuthnot is in his own Valley Sales and Equipment sponsored R70 team which has two cars as he explained, “We have a ‘17 Bicknell while the ‘19 Bicknell we ran at Fulton. Engine Research does our motors.”

He had high hopes for the 358 opener and finished in sixth place.

Looking at Can Am, Ryan said, “Setting up a car here is important. We have changed the body a bit and aero just means so much more here than it does at some other tracks. Tonight was a smooth surface, but conditions have been different this year.”

They were smooth on Wednesday night and he said, “The rough surface can be hard on equipment. I want it smooth.”

The R70 started seventh on the grid and spent a large part of the night working his way up through. He had fallen back to around 12th around lap 20 and was 11th with 23 laps left. Running high around the track, hoping the car would stick, he found himself in seventh with just 10 laps to go.

Positions remained stable throughout the top ten during the final ten laps with the major change in spots coming on lap 57 when leader Billy Dunn broke.

He’s been behind the wheel of a race car for the past eight years and looking back explained, “I spent a year in Sportsman and the rest in Modifieds.”

Ryan had some moments that he won’t soon forget as he said, “Winning three of four at Brockville this year is something I’ll remember. Two years ago at Mohawk I finished third in a Super DIRTcar Series race at Mohawk. I will always remember that one as it went the first 96 laps green. I was able to hang with Sheppard, Phelps, and the others.”

Ryan Arbuthnot returned to Fulton for the second 358 series show of the year and is confident that he can fare well on the highbanks in the “Showdown at Sundown.”  Unfortunately his night ended poorly with a 26th place finish.