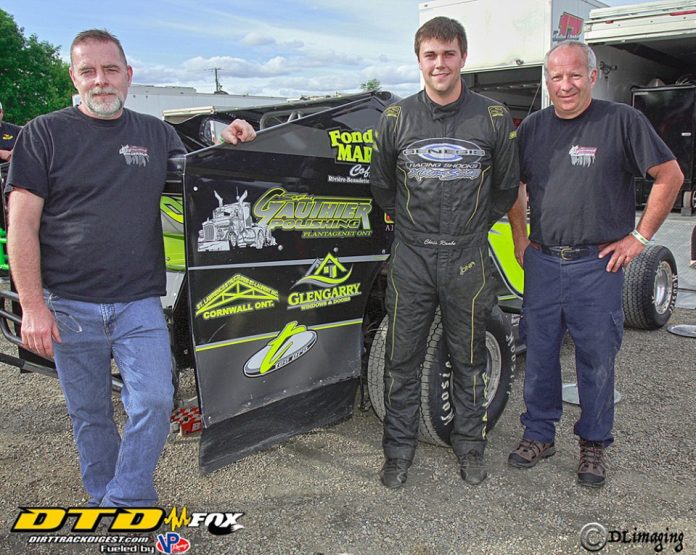 It has been a tough road for the Chris Raabe No. 01 team as season 2019 has unfolded, but their perseverance is paying off. Chris explains, “We started the season out running our new car, but chassis set-up was just about impossible. We tried numerous adjustments but nothing seemed to work. We finally brought out our old car, which thankfully was more competitive, keeping us in the points chase. We took some time figuring out the situation with the new car and finally got our first win at Mohawk int Raceway.”

The team, picked a second win a few weeks later at Plattsburgh Airborne Speedway. Getting that second win for the team was a great relief, but was short lived as the car was seriously damaged during the heat race at the Cornwall Motor Speedway the following night. The car was damaged to the point of whether to write the car off or a great amount of work to fix it. In either case, the team took a heavy hit and, for the time being, is down one car. “It was a tough end to the season last year and we have had an uphill battle so far this season, but we are still in the game at our local tracks. The next few weeks will test the team, and with any luck, we will get through this latest set back,” Chris said.


All in all the team has managed two wins along with a couple of podium finishes and 10 top-five finishes so far this season, but it is the consistency that is really paying off.

Currently, Chris is leading the points at Plattsburgh Airborne Speedway and Mohawk International Raceway, while at Cornwall Motor Speedway Chris is still well up in the points battle, currently sitting in fourth.

The team also has acquired three new sponsors this season. Chris cited, “We are very happy to have Alexandra Home Hardware Building Centre come on board as one of our new sponsors. Marleau Foundations along with Stephane Gauthier Polishing & Detailing will also be on-board for the first time this year. Kid For Kids is also back with us for the 2019 season.”

I asked Stephane his thoughts coming on board with the team. Stephane said, “I have always been a big race fan and for many years wanted to get more involved with the sport, so coming on-board with Chris and the team was more or less fulfilling that desire and I look forward to working with the team.”

Yes, the team has had its ups and downs the first part of the 2019 season, but the father/son duo has managed to pull of miracles in the past and will likely continue to do well as the season progresses.

On a side note Chris along with the rest of the team would like to thank Delbert Legrow for offering the use of his car on June 16 at Cornwall Motor speedway. Chris was involved in a crash, which took the 01 car out for the rest of the nights racing, but Delbert quickly offered up his ride so as Chris could take the green flag to get valuable  championship points.