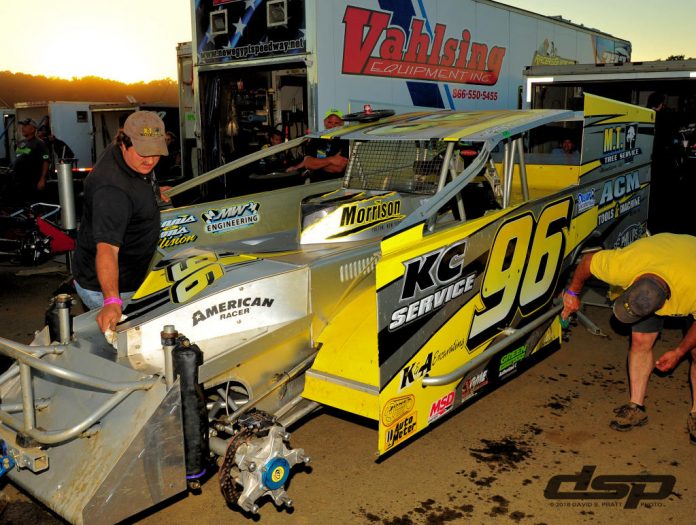 With the mid-Atlantic’s first heat wave upon us, it seems that it is not only the weather that is starting to heat up. Frenchtown, N.J., wheelman Billy Pauch Jr.’s, recent success seems to be rising as fast at the temperature. Pauch started off last Friday night with a win at Big Diamond Speedway and followed that up with fourth place finish Saturday at New Egypt after coming from deep in the field without the aid from any yellow flags. Tuesday night at New Egypt Speedway, Pauch played the waiting game and came on when it counted to win the 60-lap feature event and the $6,000 first place prize that went with it.

Brandon Grosso was the lucky driver to draw the pole starting spot and immediately raced to the lead at the drop of the green flag with invader Jeff Strunk running in second. David VanHorn was on the move early to get by Pauch for third. While Grosso was out front stretching his lead, the trio of Strunk, VanHorn and Pauch were waging a titanic battle for second with Strunk able to maintain the runner-up spot through a series of early race cautions.

While all of this was going on upfront, Duane Howard aboard the Norm Hansell No. 357 was quietly working his way to the front after starting in eighth. Howard lined in the seventh spot for a lap 17 restart and by lap 23 Howard had worked his way up to second and was gaining ground on Grosso when another yellow flag was put to slow the race on lap 26.

On the restart Grosso charged back to the lead with Pauch getting by Howard for second. Howard was not going to be denied and as the field took the crossed flags signaling the halfway mark, Howard was back by Pauch for second and immediately started to cut into Grosso’s lead.


Howard was on the move and as the field approached the scheduled lap 35 fuel break he had sliced down Grosso’s lead to just a couple of car lengths. Unfortunately for Howard, the fuel stop was his demise as the right rear tire went flat under the break forcing Howard to the pits before the race restarted.  He had to start at the back of the pack relinquishing his second-place status.

This moved Pauch up to second setting up a 25-lap run to the finish.  Grosso once again set the pace after the break looking to take home his first win of the season. Grosso seemed to have the race in hand but as the field approached lap 45 you could see Pauch starting to inch closer to the leader Grosso. By lap 50 Pauch was all over Grosso and one lap later Pauch overtook the young driver to take over the lead. Grosso didn’t let Pauch go easily and tried everything to get back by him for the lead but to no avail as Pauch starting to pull away ever so slightly every lap. The race was slowed by one more caution on lap 55 but Pauch never waivered and took off on the restart to win by a comfortable margin over a disappointed Grosso. Danny Bouc came on late to finish third with Frank Cozze and VanHorn rounding out the top five.

“It’s been up and down all year here, we’ve had some good runs and we’ve had some bad runs,” said a jubilant Pauch afterwards. “But all-in-all, we’ve been steady here.  You look at the stats and they look good, but it’s hard having to come from eighteenth every week. We’ve had top five’s pretty much every week, so we’ll keep working at it. Big Diamond had me down and we won there last week. Momentum swings your way and you have to ride the roller coaster; it goes up and it goes down.  So you just have to ride it out and try to ride the middle of it. The track was phenomenal tonight.  They did a good job giving us a track we could race on. The crowd looked good, but you always would like to see it better. I hope we can get a packed house for the Deyo (STSS) race in August.  That race is going to be a great race.”

Pauch went on to talk about his winning move of getting around Grosso for the lead.

“You start looking at things and when I saw Duane go off during the break, and I honestly hate to see that happen to anyone, but I knew then that I was in better shape now to get the win,” cited Pauch. “Once that happened, I knew Grosso had a soft tire, so I let him take off and I just bided my time. Probably at (age) twenty-one I would’ve have never known that, but at age thirty-two now I guess I am a little smarter. They say you get wiser with age and this is a funny sport, they say your best years in a Sprint Car are when you are younger but in the Modifieds it seems to be vice versa.”

The Holsten team usually races their spec 358 engine at New Egypt on Saturday nights, but tonight decided to bring their open small block and the move definitely paid off at nights to a tune of a nice $6,000 payout.

“This isn’t our normal car here, so I was kind of tickled pink to bring this car here tonight and come home with the win,” explained Pauch. “We usually run our spec car here, but tonight we brought the open small-block. We had a motor issue last week with the spec car so we pulled the motor and put our spare in.  We didn’t want to take a chance running that car with the points and stuff. Ricky (Holsten) made the call on that and the call was right. This car has been very good so far this year.  We had a fourth at Georgetown and a couple of good runs with it at Big Diamond. I am going to run this car for the rest of the STSS South races so we’ll if we can keep it up front.”

Pauch/Holsten Combo More than Just a Driver and Owner Relationship

Most driver and owner combinations have short life spans in the world of dirt Modified racing. Yes, there are a few that go on for many years. The Ryan Watt/Roberts Racing combination and the Jimmy Phelps/Al Heinke teams are the two that come to my mind off the bat, but for the most part in today’s world these combo’s only last two to three at best. Which brings us to the combination of Billy Pauch Jr., and Rick Holsten. This is the sixth year Pauch and the former racer himself Holsten have been together and from all accounts the combination of the two seems to get better as the seasons go on.

“We’ve been together almost six years know and in racing that is pretty unheard of. I’m fortunate I’ve had a lot of good owners, but with Rick it’s been six years and it’s been different,” as Pauch talked about his current car owner. “We kind of share everything to be honest with you. He has stuff on my car and some of my stuff is on his car and it works out for both of us. Saturday nights here have become a tradition and we’ve tried to branch out a little more than what we have done. We have a new crew guy this year that helps out on that end to allow us to travel a little more. I wouldn’t call him a father figure since we drink a lot of beer together, but I would say he’s more like an older brother who straightens me out when I need it. I have people ask me to do other things, but I always tell them that I’ll do anything, but I am racing with Rick on Saturday night’s along with some specials.  I don’t plan to give that up until he’s done. Rick and I just click together, I can’t explain it, but we just do.”

The great thing about the Pauch/Holsten team is it is just not the owner and driver who hit it off, but the crews seem to work together as well making team even stronger.

“It is really a good deal; we have many guys that go back and forth between the two teams and I never thought I would have this many crew guys which is important these days. You see quite a few teams that only have a couple of people helping them out and I am blessed to have to have so many guys willing to give up their night’s not only at the track, but in the shops to help me win,” mentioned Pauch. “It’s kind of a family deal we have going here, the Watt’s (Ryan Watt) are the same way and I think we have the same thing going here with so many people that really want to help me and Rick out. Look, I don’t do this for a living.  I want to win races, but I want to have fun at the same time and I want to be around guys that feel the same way. If I don’t like this person, I don’t really want to do it and that’s the truth. You have to have good people around you and that’s what I have. I’m fortunate.  I get along with everyone here and hopefully we can keep this going. They say you get better with age so maybe some day I can run with some of those guys. I might be a veteran, but I am still spotting Duane (Howard) and Jeff (Strunk) over twenty years and I don’t want to say that you are almost 60 (myself). All and all this No. 96 team is a great team and I hope we can continue to have success going forward.”