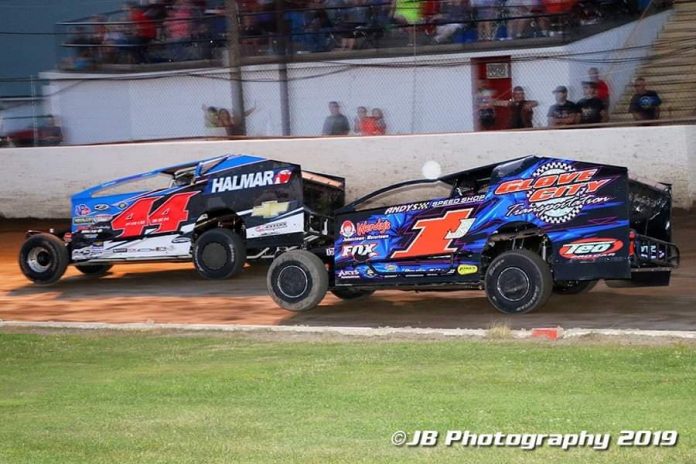 It’s not very often that a Modified driver at the Fonda Speedway has a chance to do what Rocky Warner did on Saturday night. Stewart Friesen passed him for the lead and usually that is the end of it. He’s going to take the win. That was not the case this past weekend as Warner got back by Friesen to take the checkered flag.

“I thought it was all over with,” cited Warner. “I could feel myself slowing down, but I really didn’t hear anyone behind me. I saw the lapped cars on the bottom. I just tried to stay outside of them and drive through the middle and it was pretty good. I ducked to the bottom the one time and I didn’t wait for the bottom off. I kind of drove past it. It didn’t feel that much faster. I figured it was best to go back to the top then Stewy drove by me on the bottom. I thought we were all done.”

He wasn’t as a few laps after Friesen took the lead, he made the very same mistake. Friesen went to the outside of a pair of lapped cars allowing Warner to drive back underneath him.

“I followed him in and he went to go around the lapped cars,” stated Warner. “I don’t know what happen between the 16 (Creeden) and the 76 (Varin). They moved up a little bit and I tucked underneath them and got by them. I don’t even know. This is outstanding. It’s awesome deal. I don’t know what we did to deserve this, but I’m taking it.”

Warner has now collected four wins on the season for his Jake Spraker owned team at Fonda Speedway. It is a much better result than what the team has in 2018. They’ve settled a combination they like and it’s paying off.

“Jake did his research over the winter to figure out what we needed for motor and he ordered it,” commented Warner. “He did everything he needed to do to get the motor sent here. We have an awesome Teo Car. I think the biggest thing is consistency for me. Running the small-block is a lot more fitting for me instead of the big-block. Last year we were trying something different every week and it was stressful. We started off where we left of last year with the small-block. It’s just been clicking. We are on a roll here and a roll at Malta.”

Friesen Not a Fan of Losing

Although he forced a smile, you could tell Stewart Friesen wasn’t happy that he gave up the lead after working so hard to get it from his 12th starting position.

“I hate losing,” stated Friesen with a half-smile. “It sucks. Especially when you go sliding by. If I would have just parked it on the bottom for two more laps we would have had him. We tried. We’ll trying again Wednesday.”

Friesen thought he could go to the outside of the slower traffic and get back to the bottom before Warner could get close to enough to pass him back. That wasn’t the case.

“I found the bottom and was pacing there with Rocky on the top,” said Friesen. “I knew I had to try something so I went to the bottom and rolled by. The traffic was side-by-side so I thought I would get to the top, get around them and then get back to the bottom. The top was too far out and the bottom was too good and he slid back by.”

David Schilling has quietly getting better and better each week at the Fonda Speedway. The East Greenbush, N.Y., had a solid third place finish behind Warner and Friesen on Saturday night.

“It’s really good to be competitive with these guys,” commented Schilling. “Being able to run up front with these guys is a testament to how good we are this year. I’m not even close to Stew and Rocky, but being able to run in the top five here more consistently I’m proud of that. We got to get a little better. I’d love to get up there and race for wins with those two guys, which we are not able to do right now. It’s good, but not good enough yet.”

Schilling, who spent much of 2018 traveling with a Sportsman car, admitted that the chance to run one track weekly has really helped improve his results. He gained a lot of knowledge on the road but racing week in and week out at Fonda has made it easier to make adjustments on the teams Bedell powered Bicknell.

“Racing one track has really helped,” mentioned Schilling. “Last year we ran all over the place with the Sportsman deal. I haven’t run anything weekly for the last two years. We were running as many races at as many different tracks as possible. It was great for learning. Doing this is big for consistency. Running a few nights a week and all over the place you get worn out. Being able to run one night a week, know what we are doing and knowing our game plan every single week definitely helps us be consistent.”

Schilling went on to thank his dad Carl, the Maresca family for their support as well as crew-member Travis Corbett.

This & That – The Finales – DTD Exclusive