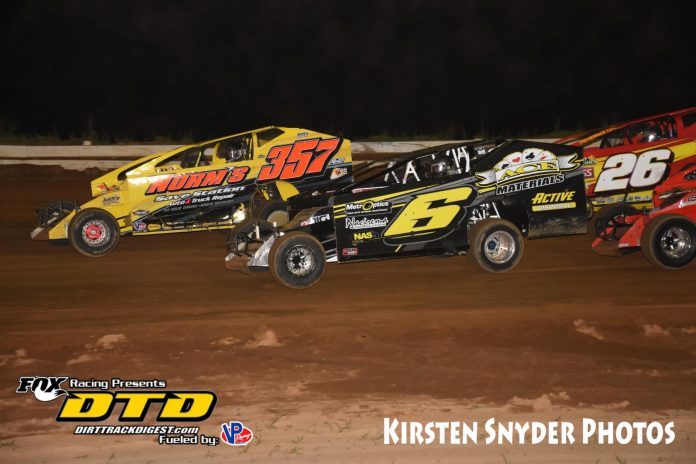 Just like last Friday night’s winner Billy Pauch Jr., Duane Howard has struggled to find victory lane at the Big Diamond Speedway in 2019. Unlike Pauch who was having a hard time getting the handle on his No. 15, Howard was having no such issues with the Norm Hansell No. 357. The team has shown speed each week, but issues have seemed to crop up that have stopped the 2018 Big Diamond track champion from reaching victory lane.

Friday night at the speedway, Howard and his team had things all go their way as Howard sped to a dominating victory in the 25-lap main event. It was a victory the team needed badly after a tire went flat on Tuesday night at New Egypt Speedway while running second with the fastest car on the speedway at the time.

“This makes up for Tuesday night a little bit, but I still wanted to win really bad on Tuesday night,” sad a victorious Howard while awaiting his car to get through tech. “We finally kept the air in tires for a whole race. We got rubbed a little bit on the initial green, but overall kept it pretty clean, we had a good race car tonight.”

Howard used a restart on lap nine to take the lead from a strong running Matt Stangle and talked about how he was able to make the pass for the lead.


“The prior restart before I got the lead, I kind of rolled around the No. 6 car and felt it was pretty good, but just couldn’t make the pass,” explained Howard. “The next restart I was able to keep the car underneath me and kept it snug and rode the brake. I didn’t quite go into turn one hard enough on the restart before and he was able to get me and then Jeff (Strunk) got there. I knew I had a lot more entry speed I could obtain so I knew I had a lot better shot the next restart. I needed to time it better going through three and four and if I could get at least a half a car going down the straightaway I thought I could roll the top pretty good in one and two and clear him to make the pass. This car has been good here all year.  We decided to go to a back to a basic bar car here this year and we’ve been fast. If we can just keep the air in the tires, we’ll be up front”

The new clay surface put down over the winter has made the teams search for the right set-up combinations and it seems the teams are starting to figure it out.

“It’s all about track position, this track is really fast,” cited Howard. “When you get strung out it’s hard to pass the car in front of you. Everything is about restarts.  I got Stangle on the restart and if I wouldn’t have got him on the restart I probably would’ve have followed him to the finish. With the new clay, everyone has to figure it out and we just can’t move around yet. The bottom is a little too fast and if you use the top you get hung out there. I think we all have to learn how to adjust our cars and figure out the clay. They are doing some good stuff here at Big Diamond with the money they are putting up and the new clay. It’s tough right now, but as the season goes on, I think it will only get better.”

Even though Howard has had fast cars all season and knew that they would eventually find victory lane, he figured it wouldn’t hurt to bring along his youngest daughter Jess as a good luck charm with him on Friday to try and help him get to the front. The last time Jess attended a race with her dad, the No. 357 also sat in victory lane. Not only did Jess bring him the good luck Howard needed but a sign of what to come for the night was also present when Howard looked at the number on the pit band she had on.

“You know what, she doesn’t come to many races and I really look forward to the races she does come to,” said the proud father Howard. “I’ll tell you what, when I looked at her band tonight and the last three number of the band were No 747. When I saw that, I said to Jess that tonight is our night. Out of all the people here tonight and she gets that pit band number ending in No. 747. She doesn’t get to come that much. I mean she loves what I do but just doesn’t get to as many races.”

For those that don’t know the No. 747 is the number that Howard’s girlfriend of four years Jenn Chemidlin-Arch’s father John Chemidlin has used famously on his race cars for many years. Unfortunately, John Chemidlin passed away on Sunday June 16 this year and Howard dedicated his win Friday night to Jenn and the entire Chemidlin family.

“It was John Chemidlin night here tonight,” mentioned Howard. “Jenn couldn’t be here tonight, and I want to dedicate this win to her and the Chemidlin family. It’s a shame to lose people in racing like we do.  John was such a good guy.  It’s a shame I only got to know John for four years.  This is for the Chemidlin family and for all of the others that have passed in our racing family this year. I’ll tell you when I saw the 747 on Jess’s band, I knew I had 747 on the side of my race car tonight, not 357. This win meant a lot to me tonight.”