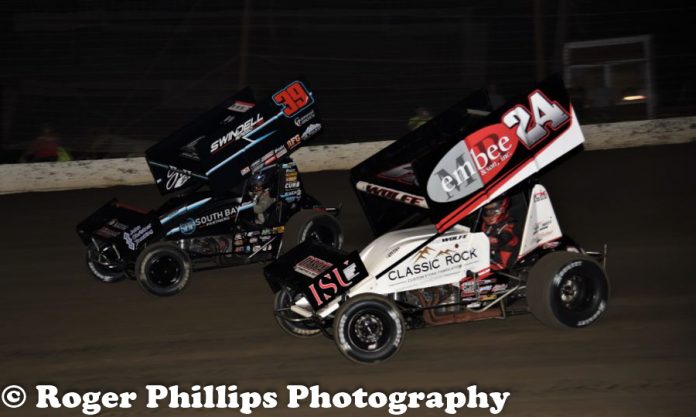 Everyone knows that Christopher Bell loves running on the dirt ovals across America on his time away from his full-time job, racing for Joe Gibbs in the NASCAR Xfinity series. The multiple-time Chili Bowl winner just loves getting back to his roots and mixing it up with the best dirt has to offer on the local scene. Despite winning the nation’s biggest dirt race for Midgets, another one of the goals for the driver out of Norman, Okla., was to get a win against the feared Pennsylvania Posse.

The PA Posse have pretty much dominated the shows during PA Speedweek in recent years even though some guy you all might’ve have heard named Kyle Larson has managed to steal away few checkered flags. He beat the likes of Danny Dietrich, Freddie Rahmer Jr., Logan Wagner, Lance Dewease just to name a few.  It is not an easy task anywhere but especially on their home tracks. However, Tuesday’s race was at Grandview Speedway, which is not a weekly track of the Posse, but a track they only race at a couple times a year which might give the invaders just a tad more confidence going in.

Bell loves the challenge of a new track and last year was coming through the field and to the front quickly at Grandview when flat tire took away any chance of a win. In 2019, Bell was determined to have a better run at Grandview and at night’s end it was Bell standing in victory lane with his Kevin Swindell owned Swindell Speedlab No. 39.

“Man, I love this place,” said a happy Bell back at the trailer afterward. “This track is extremely fun to race at.  It gets slick and you can run all over the place so to go out there and run 35 pretty good laps here is pretty cool. I started to struggle there at the midway point of the race and couldn’t tell if I should be running at the top or the bottom, so I just tried to change it up going through traffic and it worked out for us.”

Bell was fast from the get-go on Tuesday night posting the fastest time in time trials and then qualifying solidly in his heat to earn a coveted redraw spot for the feature. As luck would have it, Bell pulled number one putting him on the pole for the race.

Bell immediately jumped to the lead and was looking to drive away from the field. A red flag on lap 16 erased Bell’s straightaway lead putting second place running James McFadden right on his bumper.

Bell jumped back out to the lead on the start and was starting to pull away from McFadden. As the laps wound down McFadden started to run down Bell and was putting pressure on the leader as they both raced thorough lapped traffic. Once the lapped traffic had cleared Bell was able to stretch his lead out again as now McFadden has to deal with a fast closing Lance Dewease for second. Bell went on to take the checkered flag and win the race he has marked on his calendar since last year.

“I heard James (McFadden) there a few times and tried not to screw up,” explained Bell. “I just kept telling myself to hit my marks and watch what the lapped traffic was doing in front of me so I wouldn’t have a problem. Once we cleared the lapped traffic, I think I was able to gain on him again.”

It was a big win for Bell and one he can brag about with his peers as he heads back to Daytona to compete in Friday’s night Xfinity race. Beating the PA Posse doesn’t come easy and Bell knows what it means to put be able to put that on his resume.

“This feels really, really good, these guys (PA Posse) are professional racers and are very tough to compete against, especially when you only get to race with them a few times,” as Bell contemplated what this win meant to him. “It’s really nice to come in here and have success. I’ve been to a lot of different racetracks all over the world and I’ll tell you what there aren’t any better fans than the ones here in Pennsylvania. I want to thank the fans for coming out tonight, it’s an honor to race in front of packed house like.”

Jeff Strunk and the Glenn Hyneman No. 126 team have struggled at their Friday night home track of Big Diamond in 2019, but Saturday nights have been quite the opposite. After a slow start which saw Strunk suffer from three early season DNF’s the team has come on like gangbusters. After Tuesday night’s Thunder on the Hill win, Strunk has now won four out of the last six races at Grandview.

Starting the 30-lap feature event in the seventh spot, Strunk was immediately on the gas early and moved up to third quickly behind Mike Gular and Brett Kressley. Gular was leading and looking like he was out on a Sunday afternoon cruise as Kressley and Stunk were having a spirited duel for second behind him.

As the laps wound down, Kressley and Strunk started to run down the leader Gular and a three-car battle for the lead was on. The three drivers battled fiercely in the closing laps racing side-by-side and three wide. Strunk made his move splitting Kressley and Gular to take the lead with only a few laps left. Once in front, Strunk was able to put some daylight between himself and Kressley to go on and take the big win.

“That was a tight run there but we all never touched” said an elated Strunk.  ”It was a helluva a race.  I just buried it in there.  I knew the car was going to stick, but I wasn’t sure how much room I would have for the exit. We got to the center of the corner and we were still three-wide and nobody’s touched yet and I had the choice position.  I just stuck with it and ended up in front there going down the straightaway. That was the hardest I’ve run in the middle of two guys for a long time, if not ever. But the car was good, and the car stuck, and we definitely have a hot rod here at Grandview. We have a good deal going here, I have a great owner, a great crew and sponsors so hopefully we can keep it going.”

This & That – A Weekend to Remember – DTD Exclusive 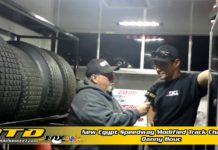