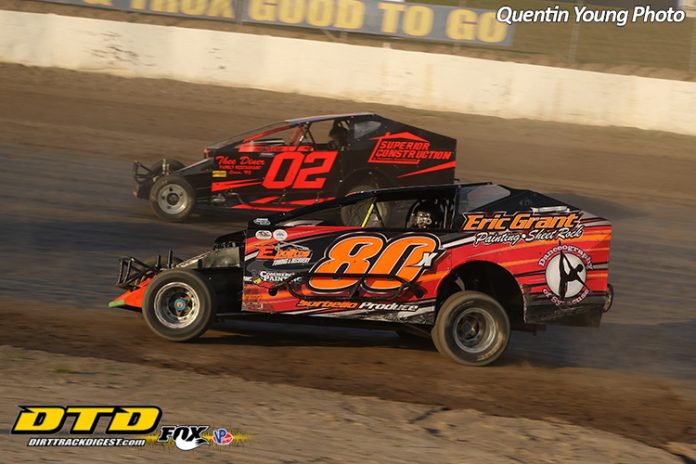 “I’m older than some of the fathers of many of the Sportsmen drivers I race against,” said veteran Mike Button as he stood alongside his car talking to DTD.

The Sportsman division is now dominated by the younger generation where it’s not uncommon to find high school aged competitors as well as many drivers in their twenties.

The victories for the more mature drivers have become less and less, but when those veterans enter victory lane there are emotional, meaningful and unforgettable moments.

Recently, at Brewerton and Fulton a trio of those oldies, but goodies celebrated.

Joining Mike Button were guys he has raced against for decades as also winning were Joe Sobotka and Jim Spano.

Button and Sobotka won at Fulton and Spano at “The Demon”.

For Button he had to wait to make up a race and it was a major relief as he said, “Our season has sucked. I thank God we could finish first.The car was much better and I really wanted to get that monkey off our back. The last win came almost three years ago to the day. I really wondered if I would ever get back here (to victory lane).”

This year the 80x, according to Mike,”has had motor problems and some odd stuff just happening.”

Mike started racing nearly 40 years ago as he noted, “I just turned 56. I started running outlaw small-blocks in the mid 80’s and had even run those VW mini sprints for a while. Motor expense was just too much and if it weren’t for the crate motors I would not be racing today.”

He has the old gang together and noted, “We got a new motor over the winter and I have former racers Joe Slaviak and Ted Lamb working with me and we are having fun.”

In running against the younger kids he said, “I just like to hang with them. I think I am older than all the racers fathers of the guys I race against.

Like Button the other two veteran feature winners realized just how important it is to stand celebrating in victory lane.

So many times younger drivers take it for granted that once they will there will be many others to follow.

However, such is not always the case for guys who have raced for decades.

In 44 years of racing it had been quite some time since Jim Spano had celebrated a feature win, but on May 31 there he was in victory lane at the Brewerton Speedway.

He said, “I won a 75 lapper years ago and still have that huge trophy. I started racing in ‘75 in at Weedsport in a Street Stock I built myself. I was running against guys like Dale Weigand, Jack Naum and Dick Treat. I was track champ at Weedsport in ‘76 and against in the late 80’s and early 90’s. I was event a track champ in Sportsmen at Rolling Wheels. When my dad passed in ‘83 I quit for a few years.”

Memories are treasured by the driver of the 1 JVS and turning to recent years he said, “The last few years I’ve struggled. I just didn’t have a good motor program. I bought a Race One motor out of Ohio. I put that motor in just a couple of weeks ago before I won. We were just underpowered and I thought we needed to change. As soon as it went in the first night I was fourth at Brewerton. What a difference it made.”

Continuing he said, “It’s a hobby for me and that win sure meant a lot to me. I didn’t have a win in three years. I wasn’t competitive and you start questioning whether it is you or the car. That night we won on the very first lap of the feature I knew I had the car. The car had never been hooked up like that. When you have a good car under you you really know it.”

He’s behind the wheel of a ‘16 Bicknell that he bought from Willy Decker Sr. and is quite happy with the way things are going.

Reflecting he said, “In the old days I was much more aggressive than I am now. I wasn’t dirty, but if I need to lay a bumper on someone I would do it. Today maybe not as much, but I think I could still do it.”

In the pits with the driver of the 1 JVS (James Vincent Spano) is 80 year old Bob Humphries as his crew chief and the pair certainly appear to be having fun.

While Button and Spano waited a while for wins there was one driver who waited so much longer and that was Joe Sobotka.

The 771 has been around since the ‘80’s and the event had some big and small-block Modified wins.

But he hasn’t been in victory lane in decades.

However on June 2 there he was in Fulton’s victory lane. He said, “It was unbelievable. I simply couldn’t believe it. Everything had to be right. I had great tires, the stagger was there, and it was good to go. I was like being 16 years old again. It is just so hard to believe.I don’t care if I ever win against that did everything for me.”

Continuing he noted, “I came back for fun. I retired and I do this for something to do. It is all kinds of fun. I never thought I would win a race ever again. The response was something else as tons of people called and talked to me. I used to drive against guys like Donnie Wetmore, Roger Phelps, Mike Arminio and Jim Mahaney and it has been a long time.”

At 65 years old he said, “I always have done this myself I enjoy being at the race track. There are just good people here and I am having so much fun. I was definitely too old to get on the roof after I won. I love Fulton and I just seem to run so much better there. “

Reflecting on the night he won, Joe said, “I knew we were in the ballpark. The track was black and shiny and I would have sworn there was water on it. I was able to run the middle as the low side was too slow. The car was fast and just seemed to get faster. I was excited as I knew this could be the night.”

As Mike Button, Jim Spano and Joe Sobotka climbed from the cockpit in victory lane it was quite evident that this was a truly meaningful experience that they treasured.

The young lions are out in full force in the Sportsmen division were nightly 40 to 60 cars will be in competition.

The fields are huge, but the veterans, who have run The Demon and the High Banks for years rise to the top on occasion and when they do it is a memorable night.

This & That – A Weekend to Remember – DTD Exclusive