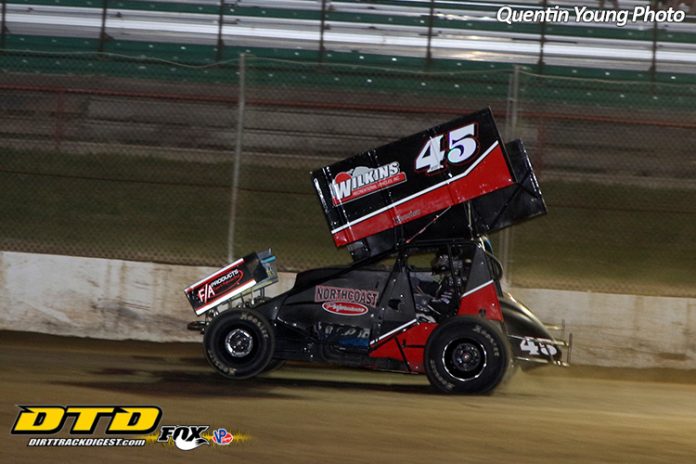 I wasn’t able to make all of the Lucas Oil Empire Super Sprints Donath Motor Worx CNY Speedweek shows, but I did make Brewerton Friday and Fulton Saturday. I had a great time enjoying the racing, as well as a busy time ministering. Friday was another off night for “the Cobra”. Chuck Hebing went into turn 3 hard on the top groove in his heat race and slid up into the marbles barely keeping his potent Sprint Car off the wall. Several cars swept under him for position. He had to work extra hard for the rest of the night making the show, starting way back, eventually finishing an uncharacteristic 15th place.

Jason Barney won the dash, and Larry Wight dominated the 25 lap A-Main so well that he was comfortable enough with his lead to “show boat” crossing the finish line on the final lap. As I watched from on top of the tower he “burped” his motor and stomped on it enough to pull a convincing wheelie as he took the checkered flag over Matt Tanner and Jordan Poirier.

Tom Sears became the first driver in the modified division to win two races at Brewerton this season. That’s where it got interesting. After he gained the lead his nephew Tim Sears Jr. raced his way into second place. Billy Decker finished a solid third over Jimmy Phelps as his cousin Chad Phelps made his way up to the top five. So, we had a pair of Sears, Decker, and a pair of Phelps in the top five. Not only that, but in the early laps Chris Hile, who led for several laps before switching lanes while being challenged by Tom Sears, was followed closely by his wife Katelyn Hile for one lap as husband and wife ran first and second.

How often do you get to see so many relatives running next to each other in one feature? I’d venture to say this was a rare occasion only the highly observant would have captured as the 35 lap feature played out.


Casey Sykes made it 3 in a row in the Mod-Lites by piloting his Hedger Chassis to the front, while holding off challenges for the lead on several restarts due to cautions. Mark Yorker won the first Sportsman feature while JJ Courcy all but dominated the second Sportsman feature once he found himself in the lead.

Saturday night was the fourth stop for the ESS CNY Speedweek. Another solid field of cars came out to try to tame the high banks. Paulie Colagiovanni and Cobra raced aggressively and intelligently throughout the 25 lap A-Main event. The 19 year old pilot raced wheel to wheel with the veteran as they swapped positions for the lead while the lap counter ticked the laps off. Colagiovanni led far more laps, but Hebing knows how to get around Fulton and found something on the final lap that carried him through the bottom of turn three. A perfect slide job by Cobra up to the middle of four should have sealed the deal, but Colagiovanni turned down from the middle grrove to the bottom using the downhill momentum off the corner to drag race Hebing to the finish line. The finish was too close to call a photo finish because a shot by a photographer directly at the finish line looked like only one car crossing the line. Electronic scoring placed Colagiovanni 7 thousanths (0.007 seconds) ahead of Hebing for his third CNY Speedweek win.

Chris Fleming parked his late model in Victory Lane in a popular win in memory of Jennah, on Yellow Out night. This started tgree years ago as Chris’s wife Rachel began to raise funds for the Golisano Children’s Hospital to research cures for Sarcoma. Jimmy Moyer, Rachel’s brother, found himself on his lid in the second Sportsman feature in the car he had wrapped to represent the fundraiser. Fortunately he was okay and the event was a huge success because of everyone that donated gift bags for the raffle, and those who purchased tickets to support it.

Cody Mannita claimed an E&V Energy Novice Sportsman win at the end of the night. Both nights I was able to attend were pretty amazing events with a lot of racing considering the heat and humidity which usually turns tracks into one grove parade races. Several grooves made for three and four wide racing in many of the divisions throughout Friday and Saturday nights.

Looking back at Friday’s modified finish at Brewerton, and the lap a husband and wife ran 1st and 2nd, I can’t help but see closeness, as relative among relatives as it is with God. Tom and Tim Sears enjoy a family closeness, but are even closer to their wives and immediate families, which I’m sure goes for most relative’s relationships in general.

The God of the Bible in known by theologians to be omnipresent. That simply means that He can be everywhere at one time. To clarify, He is a Spirit, and His residence is outside of time and space, both of which are His creations. Therefore, God is not limited by time or space. He can be with you right where you are today, while being with Jesus Christ on the way to the cross over 2 thousand years ago, at the very same moment.

As astonishing as that may seem in relative closeness or proximity, His real desire is to be known by each of us personally as our Heavenly Father, and to inhabit the throne of our heart to guide us into His perfect plan for our life. You could say He created you on purpose, with purpose, for a purpose.

“For I know the thoughts that I think toward you, says the Lord , thoughts of peace and not of evil, to give you a future and a hope. Jeremiah 29:11 NKJV”

The only way to discover what that specifically is, is by entering into a close personal relationship with Him. That’s why He sent His only Son, to humble Himself by taking on our human form, to introduce us to His way of life, and to give us a face to personally identify with.”

Blessed be the God and Father of our Lord Jesus Christ, who according to His abundant mercy has begotten us again to a living hope through the resurrection of Jesus Christ from the dead,

“Therefore, brethren, having boldness to enter the Holiest by the blood of Jesus, by a new and living way which He consecrated for us, through the veil, that is, His flesh, and having a High Priest over the house of God, let us draw near with a true heart in full assurance of faith, having our hearts sprinkled from an evil conscience and our bodies washed with pure water.

God is always close to us, but His deepest desire is to be close with us. We have to realize one fundamental truth to enter a genuine relationship with God. There is only one door in. All roads do not lead to God, at least not the One true God.

Jesus, God in the flesh, was very clear on this in His dialogue with His disciples.

“Then Jesus said to them again, “Most assuredly, I say to you, I am the door of the sheep.  I am the door. If anyone enters by Me, he will be saved, and will go in and out and find pasture.

A few chapters later John recorded Jesus’ words as He was preparing His disciples for His death, burial, and resurrection.

“Jesus told him, “I am the way, the truth, and the life. No one can come to the Father except through me.

Later, as John was exiled to the prison island of Patmos, after Christ’s resurrection and ascension, Jesus revealed Himself to John to share a deeper revelation of Himself. In that vision John recorded Jesus saying these words.

“I am the Alpha and the Omega, the Beginning and the End,” says the Lord, “who is and who was and who is to come, the Almighty.”

While He was ministering on the earth He went to raise His friend Lazarus from the dead. When Lazarus’ sister Martha met Him along the road He said this to her.

“So when Jesus came, He found that he had already been in the tomb four days. Now Martha, as soon as she heard that Jesus was coming, went and met Him, but Mary was sitting in the house. Now Martha said to Jesus, “Lord, if You had been here, my brother would not have died. But even now I know that whatever You ask of God, God will give You.” Jesus said to her, “Your brother will rise again.” Martha said to Him, “I know that he will rise again in the resurrection at the last day.” Jesus said to her, “I am the resurrection and the life. He who believes in Me, though he may die, he shall live.  And whoever lives and believes in Me shall never die. Do you believe this?”

His desire is to be known by us. If we would be honest with our self we’d admit that our deepest desire to to be accepted as we are. That’s what He does, because of His love and sacrifice, for anyone willing to profess Him as their Lord, while sincerely believing in His resurrection as the finished work of our redemption.”

Today you can decide for yourself. You can choose life apart from God even though His omnipresence prevents anything from being concealed from Him. That’s one option. The other is to humble yourself by being honest with yourself. Admit that if God offered you a personal place near to His heart you’d accept it, and Him, just as He is willing to accept you as you show sincere faith in Christ as being the door you enter into this awesome relationship through.

He does not punish us for all our sins; he does not deal harshly with us, as we deserve. For his unfailing love toward those who fear him is as great as the height of the heavens above the earth. He has removed our sins as far from us as the east is from the west. The Lord is like a father to his children, tender and compassionate to those who fear him.

If we can assist you in knowing Him better let us know. He’s waiting for you with an open heart and open arms. Jesus looked down from heaven and thought “they are worth dying for so I can redeem them from the rule of Satan”. Don’t you think that makes Him worth living for? I made that decision 31 years ago, and wouldn’t want it any other way. He’s so good, I couldn’t imagine Him not having a prominent place in my everyday life.

We can be reached by email at flchaplain@windstream.net or on Facebook at Finish Line Chaplain.