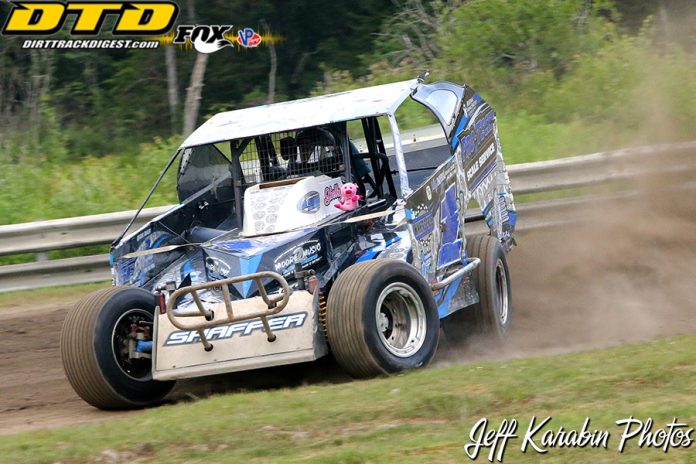 “Happy” Harry Shaffer put a late-race pass on Norwhich’s Tyler Ward to capture the first sportsman modified feature at Brookfield Speedway since 1995, the last time that Shaffer won at the Madison County oval.
Craig Pritchard and Shaffer led the 12 car field to green for the 25 lap event. Shaffer began the race with a lap two slip-up, allowing Ward and John Lutes, Jr. to get by for spots two and three.  One circuit later the caution came out for Isaiah Forward slowing on the backstretch.  Under the yellow flag, Craig Pritchard, the race leader, went pit-side for a flat left rear tire.
On the restart, Ward jumped out to the early lead while Shaffer passed Lutes for second spot.  Behind all this, Glen, NY’s Joe Orlando was picking off cars from his eighth starting spot, mounting a charge to the front.  Ward continued to lead the event through halfway and it was at the ten-to-go marker that it became apparent that lapped traffic would become a factor. As the race whittled down to the final five circuits, Ward was sitting behind Alissa Cody, Craig Pritchard and Devon Camenga looking for a lane to go by and Shaffer was charging hard behind him.
With three laps remaining in turn four, Ward went to the outside lane and Shaffer buried his number 1H machine down low and cleared Ward for the race lead.  On the final lap, Shaffer cleared Pritchard in the final turn, separating himself from Ward and securing the truly thrilling victory in front of roughly 500 folks who were just plain happy to see stock car racing back at their beloved speedway.  Ward came across the line in second and picked up the Half-way leader bonus of $200 from Upstate Spray Foam Insulation. Joe Orlando finished third and was awarded a $100 hard charger bonus from Precision Hydraulic. John Lutes, Jr was fourth and Charlie Tibbitts rounded out the top five,
“I just found a line and stayed in it, waited for them to slide up,” stated a smiling Shaffer in his trailer, living up to his nickname. “Actually I didn’t know I was in the lead, I Pulled in, the race was over and they said ‘you won,’ Been 25 years since 1995 last time I won a race here so that’s cool,” he recalled, before taking his car to the Winner’s Circle.
Jerry Lobdelo, Jr. of Genoa, NY started sixth after a heat race incident and picked his way up through the field following the retirement of early race leader, Luke Horning to win the Pro/Street stock combined feature. Lobdelo, a regular of the Thunder Mountain Speedway in Center Lisle, made the decision at about non to load the car and race. Fonda Pro Stock legend Kenny Gates came home in second, Jim Normoyle was third.
Isaiah Forward pulling double duty with his sportsman and four-cylinder cars, passed Zach Petree with four laps remaining to capture the four-cylinder nightcap.
The night started out a little bit slow, but with more and more laps the speedway really took shape. Fans in the grandstands were excited, cheering for anything and everything that happened, not just their driver(s).Walking around the fairgrounds the buzz was undeniable.
“I just can’t believe its back,” one spectator was heard saying. “Never thought I’d see it, it’s awesome,” remarked another. The fair’s attendance was comprised almost entirely of race fans, the midway was sparse even after the races were over, at a timely 9:30.  Twelve sportsman modifieds,  Though it may be a bit of a drive, I encourage everyone to make it out to the Brookfield Speedway for the next event which is TBD at this time, you won’t be disappointed in the fast action before you on this 1/4 mile oval.
Brookfield Speedway is a 1/4 mile dirt oval located on the Madison County Fairgrounds in Brookfield, NY.  Just southeast of Syracuse off US Rte. 20.