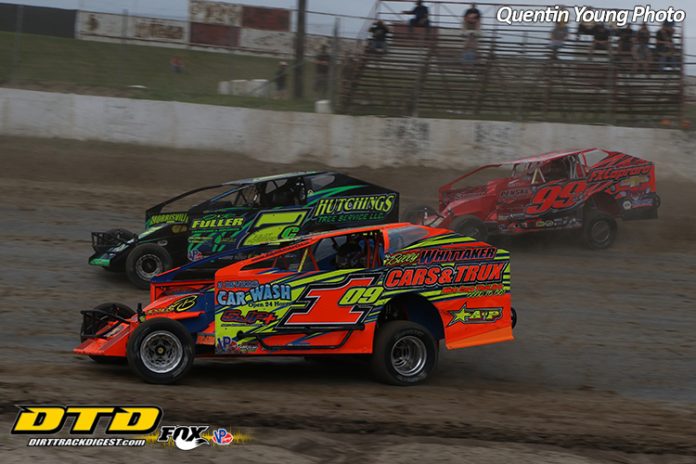 Yes, 358 Modifieds can pull off slide jobs…both dirty and clean.

After Mother Nature evenly soaked the track causing a lengthy delay the 28 Mods (were 29 but Chris Curtis lost a motor in hot laps), took the green.

Billy Whittaker, Tyler Trump, Robbie Bellinger, Jeff McGinnis and Larry Wight were all right there up to the halfway point and the side-by-side racing was something to watch with a multi-groove track as the drivers’ disposal.

Then Trump exited on lap 18 with a broken rear end and eventually McGinnis fell off the pace thus setting up a Whittaker, Bellinger and Wight spectacular.

And the trio delivered with a Hollywood blockbuster.

They were all over one another, slide jobs were the norm and it was on-your-feet, edge of your seat racing.

When it was over Wight passed Bellinger at the very end for his fifth Fulton win, but it was by far the toughest win he’s had at his home track this year.

This one was nothing short of sensational as Wight won by one-tenth of a second. Whittaker got caught up at the end and was 1.5 seconds behind in third in one of the most exciting feature events in a long, long time.

It was one of those nights where as an announcer you are caught speechless at times simply enjoying the talent and the drama that is unfolding before your eyes. I really have no idea what I was saying those final action-packed laps, but when it was over my heart was pounding as it was something I haven’t seen in a long time.

Bellinger has been having a tough year and I think going in the team would have settled for a top five, but I’m thinking now that Robbie was a bit heartbroken after that effort. He gave it his all only to come up one-tenth of a second short.

The Mod main was after two Sportman features and before the internet folks start complaining the shift was made by request of some of the drivers in the featured division. Originally the Mods were set to go right after the Dirt Nostaglia Tour. So it was around 11 when the Mods were done, but it was well worth waiting for. If you promised me another feature like that and it would have to be last I’d be the first in line to buy a ticket.

There were three Sportsman mains on deck at Fulton (including a rain out make up from early June) and there wasn’t one repeat winner.

Robert Gage, who two years ago was a crew member for Wade Christman, drove into victory lane in the make up and  sadly the post race celebration was less than he desired. As he pulled into victory lane the rain started and sprinkles became a steady downpour. He hopped out, greeted by the announcer and one photographer. Rain got heavier and the huge checkered flag became shelter as the interview was conducted under the black and white fabric. He was overjoyed and sadly celebrated by himself.

Later on in the night Casey Williams, who has run Fulton only three or four times before, eked out a six-tenths of a second win over Jackson Gill and Bobby Henry Jr. brought the Josh Livingston orange crate across the line 1.3 seconds ahead of J.J. Courcy.

Casey was interviewed in front of his car hanging from the back of a tow truck. He noted that car simply was stuck in high gear. He didn’t know why, but here he was for the first time in victory lane.

Meanwhile, Henry (a successful exhaust builder) has been behind the wheel of Livingston’s car at Fulton. Henry refused to accept credit for his win and instead praised the effort of Josh as he said, “This is a piecemeal car as every part was bought at a flea market.”

He credited the guys in making him successful.

There were 29 Mods, 54 Sportsmen and 8 Novice. Late Models were off as they were in Quebec for a Rush show. Good turnout of Dirt Nostagla cars which provided three heats and two 15 lap features.

Bobby Herrington was off on lap nine of the feature with rear end problems.

The Pioneer Window Manufacturing team of Mod Dale Planck and Sportsman driver A.J. Miller had a tough night. The team noted, “A.J. was caught up in a caution in the feature going into the center of turn one and had no way around which hit the side and caused a rear flat. The 77x was on the front stretch going three wide and was hit by a car trying to cut under him breaking the steering box.”

It was a fast track for the Sportsman division and a pile up in turn three early in the first one involved Willy Decker Jr., Mike Fowler, and Dorian Wahden. Fowler was shaken and received immediate attention from the safety crew. Sunday morning Fowler said, “I’m okay just a little bit sore” after the hard hit.

Rocky Grosso was running third in his featured only to get a yuke tire.

Addison Bowman continues to improve in leaps and bounds with a third place podium finish.

Brandon Carvey and eventual winner Williams really put on a show throughout most of the race as they raced side by side.

If you don’t watch Matt Janczuk race from the back you are missing something mind boggling. He made moves and found openings that didn’t even appear to be there as he started 15th and finished fourth.

Young Charlie Tibbitts held off Janczuk in the closing stages and even repassed the 33 a couple of times to finish third.

There were several groups of drivers who simply couldn’t break away from their competitors and it was fun watching Tyler Corcoran (6th),  Jake Davis (7th) and many others.

Pat Nolan won his first Novice main with a car he set up for a slick track (that wasn’t slick at all).

Downtown Dave Brown hopped into a Sportsman for a first time. He’s a regular Mod Lite driver at Brewerton.

Well, that’s it for this time around. If you have any contributions to Makin’ Tracks send them along to foley395@hotmail.com