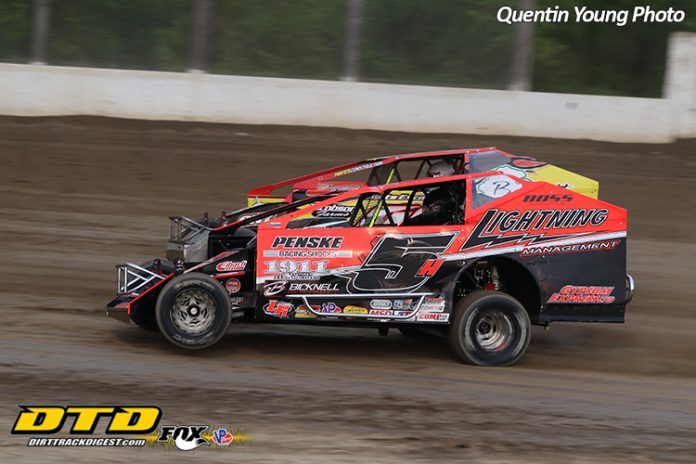 Well, racing was solid once again at The Demon on Friday night, but it just took a while to get it going.

Dust, the likes of which hasn’t been seen in a long time, lowlighted the hot lap session and when that was over there appeared to be discussions of what to do.

Water and trucks hit the track and instead of the on time as usual business at 7:30 p.m. it turned out to be 8 p.m. by the time the first heat hit the speedway thus setting the stage for one of the longest nights of the year at the Demon.

All of the regular classes were on hand with the addition of a new series called “Dirt Nostalgia Tour.”  Usually the “old timers” bring a dozen or so cars which means two heats and a combined feature.

However, sometimes success bites you in the butt and this was the case as 24, yes 24, travelers appeared in the pits as the drivers wanted to achieve a “bucket list” track. Four heats and a pair of 15-lap main-events added to the clock.

Then there was a unique heat winner and wild car right rear rolling obstacle contest along with intermission which added another 40 minutes to the night.

It was just “one of those nights.”

It was typical Brewerton as 18 Mods, 38 Sportsman, 15 Mod Lites and 13 Four Cylinders joined the 24 Nostalgia cars.

Chris Hile drove to his first Mod win of the year, but it was hairy. He was running caution free until the lap counter got inside the last five laps. He was losing tenths of a second every lap and Jimmy Phelps was coming, and coming strong. The restart was the key and Hile hit it perfectly to win by 1.3 seconds over Jimmy.

“Mr. Invisible” Tom Sears Jr. was 1.5 seconds behind the leader in third.

Chad Phelps took a leap to fourth while Billy Decker rallied for fifth.

Larry Wight was up there and moving, but with three laps to go got around between three and four which in eighth. He rallied for 12th.

Joe August and Jim Witko are getting a little more consistent with the 88 in ninth and Witko with his second consecutive 10th. Joe’s dad was excited over watching his son run wheel to wheel with Jimmy Phelps for many laps.

Roy Bresnahan hit the wall in turn one in heat action and was done for the night as only 17 started the main.

Demo’s dad hugged his son as he climbed out and simply wouldn’t let go. Emotional moment for sure.

Dolbear, who started the year in the Novice division at Fulton, came to the Demon for the fourth time this year. He started the night 41st in points, but by handicap started up front. Fans (and Ryan) simply were waiting for the field to catch up and someone to pass the rookie.

But that didn’t happen as he ran away for a near three second win over Brandon Carvey.

As he crossed the line on the cool down lap his steering broke. They towed the car to the scales and there he was standing in front of his car on the hook in victory lane trying to find words about what just happened.

As I noted it was just “one of those nights” at Brewerton.

Marty DeMoel from Welland, Ontario was a new car pit side and sadly was towed off after taking evasive action and hitting the fourth turn wall.

Brian Myers missed the night as he was a bit sore while Zach Babcock had duties to attend to elsewhere and Tucker Halliday was helping his dad with the Rush Late Model in Quebec.

Clayton Brewer III, Tom Perkins and DeMoel filled in for the absent cars.

It’s been fun watching the evolution of Tom Mackey who came home third behind runner up Justin Williams.

Alan Fink shared winners’ circle with Dolbear. The race between Alan and Jeff Prentice was exciting and wheel to wheel. Alan credited Prentice for his clean driving style and noted it was fun to race against him. Lots of respect.

Third to fifth were “The Traveler” Zach Sobotka, Chris Mackey and Amy Holland.

18 of the 19 cars finished 25 laps in the first main and ironically it was the same as the second race. Interestingly the 19th place cars both finished 24 laps.

Chris Bonoffski thought he was going to lose the motor in his Four Cylinder, but he held on to win in a wild race with runner up Quinn Wallis. They were followed by Evan Wright, Chuck Powelczyk and Ken Pitsley.

It was “one of those nights” and the heat of summer should make the final five point races something to behold.

If I missed anything send info along to foley395@hotmail.com