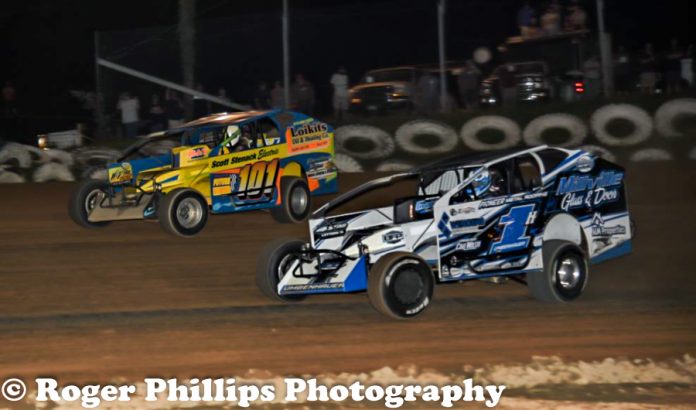 The “Richland Rocket” Jared Umbenhauer has been close on many occasions to taking that elusive checkered flag at the Big Diamond Speedway only to have something get in the way. Umbenhauer is always fast at that 4/10’s mile dirt oval and has been close to victory before only to have an ill-timed caution or flat tire derail his road to victory. Friday night everything went according to plan for the young driver out of Richland, Pa., as he held off some of the best in the business to record his first ever win at the Speedway piloting the Mike and Jenn Harvey No. 1H.

“This sure feels good,” said a jubilant and relieved Umbehauer standing by his car as it was going through post-race tech.  “You hate getting the lead that early because you know the good guys will be right there on you before long.  There were so many restarts where they were trying to get me, so I kept it tight on the bottom and let them run the outside of me. I just tried to hit my marks and be smooth.”

The road to Friday’s Victory wasn’t easy as Umbenhauer and his team were had to take off last Friday night after a hard crash at Grandview Speedway the previous Tuesday forced the team to replace the front clip on the No. 1H Bicknell chassis.

“Last Tuesday we were up in the fence at Grandview and we had to rip the front clip off of it,” explained Umbenhauer. “We took off last Friday because we knew there was no way we were getting it done it time with the holiday on Thursday. So, we thought we would take off and regroup and it all worked out, and here we are.”

Umbenhauer’s night started out on a good note as the he went out and won his heat race handily putting him in a handicap spot for the 25-lap feature event. Starting in the sixth spot, Umbenhauer immediately moved up quickly through the field as leader Jimmy Reppert paced the field.

Umbenhauer made his move for the lead on lap 12 only to have it negated when the yellow flag was thrown before the lap could be scored putting Reppert back out front. However, during the caution period something broke on the No. 97 of Reppert forcing him pit side and handing the lead over to Umbenhauer.

When the race restarted, Umbenhauer took off, but Kris Graver had his No. 101 motoring on this night and started applying pressure to Umbenhauer on the outside. Umbenhauer was clinging to the bottom groove and was able to hold off the challenges of Graver each lap. Graver’s solid run came to an end as he spun in turn one while going for the lead. Umbenhauer now had a pack of hungry wolves behind him as the track’s biggest winners were all breathing down his back.

Rick Laubach, Duane Howard, Ryan Godown, Jeff Strunk and Craig Von Dohren we’re waging war behind Umbenhauer as he continued to lead. Godown was able to move past Howard with one lap to go and charged to the outside of the leader going into turn three on the last lap but Umbenhauer was able to hold him off giving him his first win at the Speedway.

“This feels great, I have to thank my car owners Mike and Jenn Harvey,” mentioned an appreciative Umbenhauer. “They put so much money in this car, they came on three years ago and stayed with me and if finally feels so good to get this first win for them. “

I might be a little biased since I am at Big Diamond Speedway most Friday nights, but I dare anyone to tell me that the Modified division at the Speedway is not the most intense racing taking place weekly on Friday nights.

To watch drivers like Craig Von Dohren, Rick Laubach, Duane Howard, Jeff Strunk, Ryan Godown and Billy Pauch Jr., battle their way to the front each and every week is a race within a race. Add to fact that none of the above-mentioned drivers will ever be sending each other Christmas cards just makes it even better. Watching those drivers race amongst themselves is a sight every dirt racing fan should witness at least once during the season at Big Diamond Speedway. Sure, they race together during the year at other tracks, but for some reason Big Diamond seems to bring out the best or worst in their competitive nature. There is countless bumper banging, one finger salutes and finger pointing incidents each week and you can bet that every Friday after the feature race has been completed that someone will be mad at someone for sure.

With less than 10 races to go at Big Diamond in 2019, you would be foolish to not try and make it up to coal country at least once on a Friday night if at all possible, to witness the action. Trust me, you won’t be disappointed. Just ask one the fans who attend each week if you don’t believe me!