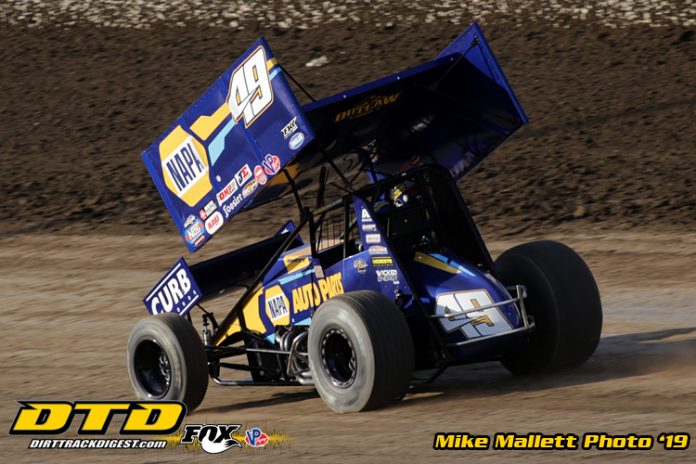 Brad Sweet continued his impressive 2019 on Thursday night at the Eldora Speedway during the opening night of the Kings Royal. Sweet held off defending Kings Royal winner Donny Schatz in the Jokers Wild 30-lap feature. Schatz got it done the night before, but on this night it was all Sweet taking home the $10,000 win.

It didn’t come without a challenge from Schatz. Schatz actually had the lead on lap two before Sweet rallied around the outside to take back command of the race.

“I knew that he would be on a different line than me,” said Sweet of his battle with Schatz. “Whatever way I went, he would go another way. You have to kind of see who has a better car those first couple of laps. Watching the B (Main), it looked like the top was dominant, but Donny (Schatz) can always run off the cushion. I tried to run off the cushion and spun my tires a little. I kind of knew he was coming, and then he moved down.  I was able to run the top and get a run on him. I definitely wanted to get the lead. He makes it awful tough when he sets the pace and runs his line. He makes it real hard to pass. I wanted to get ahead, set a pace and keep him behind me. I think that is a better chance of me winning the race.”

That wasn’t the end of the race, though. Schatz consistently applied pressure. Sweet ran the top, while Schatz hunkered down on the bottom of the speedway. He got even several times but could never fully get by Sweet.


“I think tonight we were very equal cars,” stated Sweet. “There are still some things we need to do better. I’ll go back and watch the replay. He definitely was putting pressure on me at times throughout the race. I thought I did a decent job getting through lapped traffic. I’ll have to see what kind of lead I had. The last 10 or so laps I really didn’t know where to be. I saw his nose a couple times. I knew it was going be hard for him to get a really good run unless I really messed up. I stuck with it. At the very end I pulled down and ran a little bit lower line and felt pretty good too. I think we had a really good car, and it makes me excited for Saturday night.”

Sweet faced another challenge when a caution was necessary for a spinning car in turn two. He elected to use the inside lane rather than the top for the restart, and it paid off.

“You leave yourself very vulnerable if you get spinning on the top,” commented Sweet. “You can still be side-by-side or half a car behind and come out ahead, but typically if you’re on the top and you are a little bit behind, unless he goes to the bottom or something, it’s hard to come out ahead. I think you can control it a little better. When you take off going down the hill and lose site of the guy that means you had the jump on him. I feel like that I’ve learned from Donny, you control those the best you can. If your car is really good either line is fine. The bottom is just better.”

From that point forward, Sweet went right back to the cushion. He rolled the top lane to the victory.

“That cushion looks nice, but it gets so curbed up to it and it’s slick right below it,” continued Sweet. “It depends on how you hit it. You can use it sometimes to your advantage, and sometimes you are sideways and spinning. That’s when you tend to move off of it and get low. I think my car was good all over the race track.

Sweet, with Schatz, has to be considered one of the favorites for Saturday night’s A-Main. He, like everyone else, is gunning for the huge paycheck that comes with winning Saturday’s 40-lap finale.

“The format throws the wrench into the system,” said Sweet. “Obviously with the World of Outlaw format if you have a fast car you can kind of keep yourself in position all night. I think our cars working good enough that I’m not as nervous. It’s got to be on everyone’s mind. It’s $175,000. That’s a life changing experience for any Sprint Car driver that races to make a living. It’s on all our minds.”

Heat race wins went to Stewart, Sweet, Joey Saldana, David Gravel, Schatz and Jac Haudenschild. Justin Peck dominate the D-Main before Chad Kemenah took the win in the C-Main. Tim Kaeding was the class of the field in the B-Main…

Sweet and Schatz each captured wins in their respective dashes…

Tom Harris was the first winged Sprint Car to get over on his lid. He flipped in the D-Main in turn three…

Brian Brown was the only caution of the feature when he got the wall in turn two.