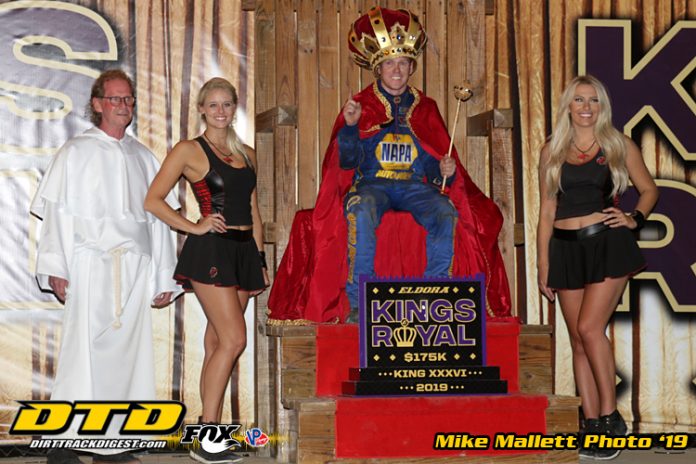 Brad Sweet’s time has arrived. After winning the Knoxville Nationals last summer, Sweet has found his groove. Sweet has been a dominant force with the World of Outlaws in 2019 leading the points while sitting atop the wins list.

That trend continued as he won the richest ever paying winged Sprint Car race on Saturday night at the Eldora Speedway pocketing $175,000 in the 36th running of the Kings Royal.

“You have to pinch me,” cited Sweet after the win. “It’s kind of surreal to me. I feel like it was getting over a hump at Knoxville. It taught me how to win a race. All those years chasing Donny (Schatz) and studying him. He’s got so many wins and he knows how to do it so well. I think I’m finally more on that same level. I don’t get intimidated. I got confidence and we know what our car needs. I think we have a good team with experience now. It just takes a few years to put it all together on the Outlaw tour.”

Leading into Saturday night’s main-event, Sweet was anxious for the chance for the major payday. After Thursday night’s win he called Saturday’s payday a possible “life-changing” win if he could get it done. He was nervous all-day Saturday, but at the end of the day he was the one celebrating in victory lane.


“Sprint Car racers make money based on how they finish,” stated Sweet. “When you have a race that pays $175,000 and basically $20,000 for second, it’s all or nothing coming in here which I’m a fan of it. It’s nerve wracking. It gets the fans attention. It’s what we need in this sport. It’s intense all night long. I felt like I was going to puke all day. If you don’t win the race it’s a missed opportunity and you only get so many. I’m so happy and I’m going to cherish the moment.”

Sweet took the lead on a lap 25 restart from Logan Schuchart. Schuchart had the dominate car up to that point in the race only for Sweet to take advantage at the green flag. He went right to the cushion and drove away.

“Honestly I didn’t want to see the red,” commented Sweet. “I felt like I had just found the top in three and four. Logan hadn’t known about it and he was running across. I think I found some speed there that I was going to be able to make some moves with. We didn’t touch the race car. We put five gallons of fuel in it. I caught the restart and I had clean air. I told my guys I was going to put it to the fence and go for it. The track didn’t have traction off the cushion like it did the previous nights. I figured if I could make some good laps and get by the first couple of lapped cars I’d be alright.”

The win came after a night in which Sweet and his Kasey Kahne team struggled. On Friday Sweet was terrible in dirty air. It was a challenge to pass cars and make his way up through the field. As a result, the team made several changes which paid off with the biggest win of his career.

“We were actually happy it happened to us last night because in a way because we felt like coming in here if we would have done the same thing we did last night we wouldn’t have won the race,” he said. “The night before it was just different. Sometimes in dirt racing things are a little different and you have to regroup to figure out what happened. I think our team right now is the best at adapting and figuring out when we do make a mistake at being spot on the next time we go on the track.”

Logan Schuchart was strong the entire week at Eldora Speedway. He was in position on multiple nights to challenge for the win with the likes of Sweet and Schatz. Unfortunately, he struggled with restarts which costed him spots on several different occasions including the final night as it allowed Sweet to get by him in the finale.

“I feel like a lot of it had to do with that last restart,” stated Schuchart. “I feel like I should have set more of a faster pace. It’s something I struggled with all week is getting the thing to take off. It is part of the game. We didn’t get the job done at that part of the race. We are here, we started 12th and finished second in the Kings Royal. Last year we didn’t make the race. I think there is a lot to be proud of. There is a lot of big races coming up so we have a lot to look forward to.”

Schuchart started mid-pack. He used a little bit of a different line to advance his way to the front. Schuchart was blasting the cushion getting into the corner before driving down the bank on corner exit to make passes. That line worked well for him right up until the concluding laps of the race.

“There at the beginning of the race, especially with a lot of fuel, there was moisture in the race track,” commented Schuchart. “I felt like you could run it in there with speed and hit that and shoot down across the track. A lot of cars in front of me were either running the top the whole way around or sliding up from the bottom to the top. I kind of had the line to myself. Anytime you have a line to yourself it is a big advantage.”

Brent Marks didn’t have the best of weeks at the Kings Royal, but he was good when it mattered on the final night. Marks continues to struggle in time-trials which puts the team behind from the get-go. On Saturday he started 16th before rim riding his way to third. At one point he had wrestled second from Schuchart only to have him go back by in the next corner.

“We didn’t really change a whole lot from the other nights,” stated Marks. “We had a great race car tonight. I just wish we could have had a better spot in the heat race. We got a bad start. If we would have started better we could have got to the front a little quicker. Other than that, the car was just phenomenal. We kind of didn’t want that red. We were still able to compete for second there. I wish we could have made it stick when I did get to second just to see if I had anything for Brad. He’s just awesome right now.”

In years past, Marks has run well at the Kings Royal, but normally it’s on the bottom. Not this time. Marks hustled his way forward blasting the cushion around the entire speedway.

“We did have the car really good up there,” cited Marks. “I felt like the track was great tonight because you could build momentum around the top and stay in the throttle. You could pull off of it if you had to in order to pass race cars. Obviously your car has to be good when you do that. I was just able to move all over the race track and get runs off of two and then slide guys into three. Some of the moves I was able to make I was pretty far behind them. It gets so wide getting into three there and you have to open your entry up so much that you can gain a lot of ground.”

Sye Lynch continued his strong Kings Royal by setting fast time in qualifying with a lap of 13.019 for the 62 cars entered into the race…

R.J. Jacobs flipped at the start of the C-Main after contact with Travis Philo which also caused him to flip. Both drivers were uninjured…

Carson Macedo got a flat in his heat race. He wasn’t able to rebound quick enough putting him in the C-Main. He transferred to the back of the B-Main, but did not make the show…

Skylar Gee’s night ended in turn three at the start of the B-Main. Gee got together with Lee Jacobs sending him into a wild series of flips. He was unharmed…