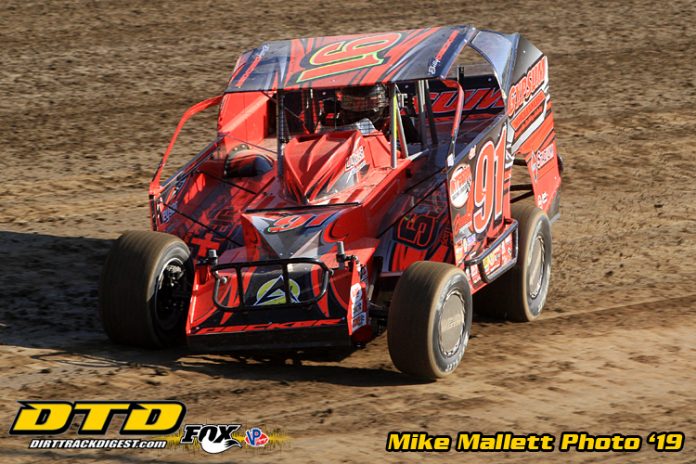 Billy Decker continues to search for that elusive first Super DIRTcar Series win of the 2019 season. He came up just one spot short on Wednesday night as he finished second to Erick Rudolph in the main-event. Decker thinks this is a sign of good things to come for his LJL Racing team.

“It’s just little things that weren’t clicking,” mentioned Decker. “I think collectively we’ve got a handle on where we need improvement. We made a nice step in that direction tonight. I really think we can continue. It’s going to take a little more searching to be where we want to be, but we made a nice gain tonight and I expect that gain to continue.”

Decker did apply some pressure to eventual winner Erick Rudolph. Rudolph was just a bit better than Decker in certain areas of the track. He also wasn’t able to focus his whole attention on race leader Rudolph as he was facing constant pressure from Mat Williamson.

“Under that green I could stay off that cushion in three and four and really makes up some ground on the 88 (Williamson) car,” stated Decker. “I thought I was on him (Rudolph) for a while. When we took off on that restart, he could get to top of three and four a little better than the rest of us. I think that’s where he got his edge. I think I was as good as him in one and two, maybe even a tick better, but he was twice as good as we were in three and four.” Decker was able to hold off Williamson, which relegated him to a third-place finish. Like Decker, he’s been unable to breakthrough for a series win in 2019. He’s been close, but he just seems to come up short.

“It’s disappointing really,” mentioned Williamson. “I feel like we’ve got a great team and great cars. I feel like we have cars to win at certain point in these races that we’ve run third at. I don’t know if we start in the back, if that’s what takes away the chances. We’ve won a lot of big small-block races recently and it seems like every one of them has been from the front. Maybe I have to work on saving my stuff for the end. We’ll see what happens.”

Williamson peaked as high as second before giving way to Decker late. He was good right up until the final restart of the race. He felt like he used his stuff up by that point in the race.

“On the opening lap, the guy that started in front of me hit the wall and it got hairy,” commented Williamson. “We were lucky to make it through that. We fell back to 12th or 13th. Then we had to come up through. There was a point in the race that I felt like we were really moving and catching them guys. I caught Matt and Erick, I got by Matt and then that felt like the pinnacle of our race. We used up everything we had at that point and we were just hanging on. I’m happy with a third-place finish.”