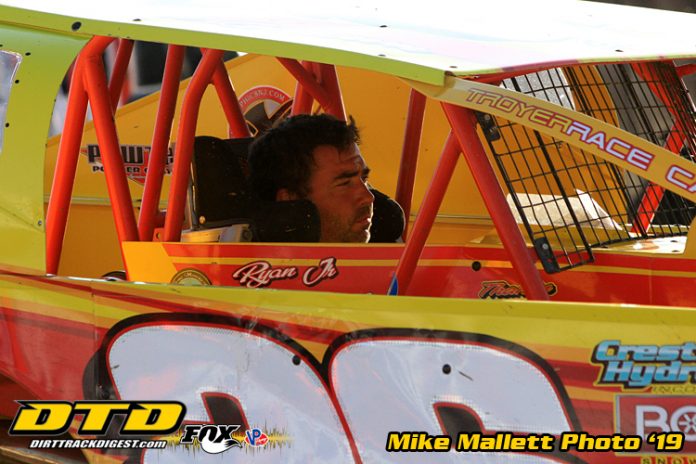 Ryan Godown and Mike Mahaney did not have the best of starts to their nights at the Eldora Speedway. Godown timed very poorly in his first effort at Eldora while Mahaney had mechanical woes in his heat race which put him behind for the feature.  Luckily, both drivers rebounded to score top 10 finishes in the main-event.

Godown struggled in practice with the race car.  He was just tight.  He went back out for time trials and the car wasn’t much better placing him at the back of the heat race.  From there he made up some ground to get sixth in the heat.  During the feature he was good early before having mechanical issues cause him to bring out the first caution.  He regrouped from that and battled back to a seventh-place finish.

“Never being here, it was tough for me,” cited Godown.  “We were tight early on.  The first hot lap session was a little greasy and I thought I would be okay in time trials and I was a little too tight.  Then we got a little better in the heat.  We went from eight to sixth and ran up on the guy running fifth.  We made some changes for the feature.  Then, in the first five laps I was up to 14th and all of a sudden I lost brakes.  The right front caliper broke.  They were saying the spindle broke and it was wobbling right there.  I shut the right front off.  I thought it was something else when I pulled in.”

He did what he had to do in order to return to the race.  When he did, he found a good line on the inside of the race track that helped him move up quickly.

“We just started picking them off,” mentioned Godown.  “I was running the top early on.  I was getting a good chunk of cars.  Then I went back to the bottom and started just trying every different entry I could.  I was watching guys to see what they were doing.  (Chris) Hile was actually pretty good and he actually showed me a bit of a line there on the bottom when I went back down.”

Once he found the bottom, that was key. Godown started picking off multiple cars a lap.  At the end of the race he was one of the fastest cars on the track.  He wanted more, but considering how the day went, he was happy with seventh.

“At the end, I don’t know if guys fell off, but we just never fell off,” stated Godown.  “I was hoping for another 10 laps because the next three were coming back to me.  Seventh, it was a win for us tonight for what we had to go through and never being here, and all the obstacles we had to overcome.  This whole deal is tough.  It is a learning experience.  It’s a top 10, top seven after going to the pits with no right front brake.  You can’t bitch about it.”

Like Godown, Mahaney had issues early in the night.  Mahaney broke a connecting rod in the heat race forcing him to the backup car.  He started the feature from 27th before rallying to finish in 10th.

“I want to thank my team,” stated Mahaney.  “They work so hard.  George, Charlie and Julien and all the guys back at home, they provide us with great equipment.    We just haven’t had a lot of luck.  We’ve had really fast cars.  It’s hard to make up for it when you don’t have any luck.  We were able to.  I think we passed 17 cars in the feature.  You can’t complain about that.  We just need to start up front.”

Experience continues to be key for Mahaney.  In his third full year on tour the King Ferry, N.Y., driver continues to learn.  Wednesday night was another one of those nights.  He just hopes to have better luck going forward.

“Definitely a better run tonight than the first time I was here,” cited Mahaney.  “I think we finished 15th from the redraw.  If you can redraw and know what you are doing you can be good.  It always helps the second time you come back.  You have notes to go off of.  We are starting to get a handle on some of these tracks for the series.  Hopefully our luck turns around.”