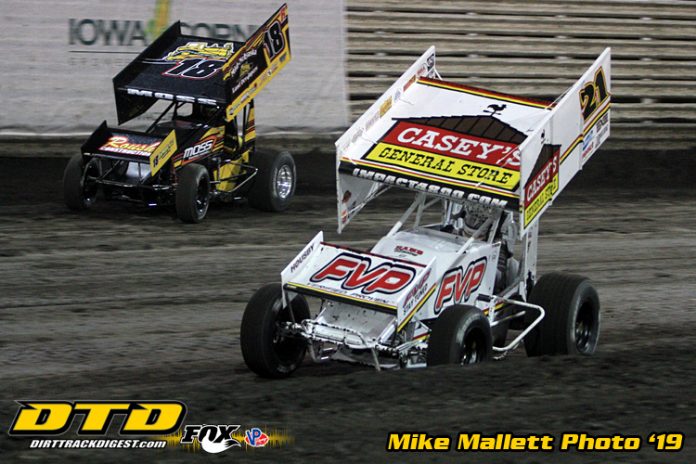 James McFadden and company seem to be clicking at the right time.  Two week’s ago the team struggled at Eldora Speedway during the annual Kings Royal, since then it’s safe to say things have come full circle for the Australian driver.

He earned a podium finish with the World of Outlaws at Lernerville Speedway in the Silver Cup, then proceeded to win two All-Star Circuit of Champions A-Mains.

Friday night he kept the streak of good finishes going as he took advantage of a late restart to pick up the win on the second night of the 360 Knoxville Nationals at the Knoxville Raceway.  It was his first Knoxville win.

“I think the biggest thing is time with each other,” cited McFadden when asked about the reason behind the solid stretch.  “You start to learn each other and how we do it.  I’ve changed a bit with the way I drive and the guys have changed a little bit with the car.  It’s tough to run with the Outlaws when those guys are already 50 races into the season and have their shit dialed.  We are trying to pick-up basically from a new team.  We just worked and worked and worked and got better and better.  I got an awesome group of guys and they keep getting better for me each time.”

McFadden is filling the seat for an injured Kasey Kahne with the Wicked Energy Gum No. 9.  He’ll continue in that capacity for the foreseeable future.

On Saturday McFadden will have the chance to go for his first 360 Knoxville Nationals title from the pole position as he was overall high point man after two nights of action.  He thinks he has a piece that can get it done.

“It’s a long race tomorrow,” he said.  “There is another few laps.  I think our car got better and better as the race went on.  Like I said, I’m excited to be there.  Our pace has been really good.  Hopefully we can get it done.”

Brian Brown took the lead in Friday night’s feature only to have a yellow negate his pass.  On the ensuing restart he looked for a way by race long leader Davey Heskin.  As Brown slid up the track, Heskin did the same opening the door for McFadden on the bottom.  That was all she wrote for Brown.

“Davey kind of blocked the bottom and went across the track,” commented Brown.  “I just felt like if he takes a little bit of air off me entering one it could get me a rolled up a little bit on my right front.  That could give me an opportunity to miss the bottom and I end up fourth or fifth.  I was just trying to take the path of least resistance and put us in position to maybe still win.  James hit a perfect lap and we ended up second.”

Brown will go from third in Saturday main-event.  He has some work to do on the car if he’ll want to taste 360 glory.

“We got to get my car a tiny bit better,” mentioned Brown.  “I felt like in traffic we maneuverable.  I didn’t feel like we were the best car, but we were good enough.”

Saldana Shakes Rust off for Third

Joey Saldana has not been a regular behind the wheel of a Sprint Car in 2019, but the Brownsburg, Ind., driver showed little rust on Friday setting quick time before a third-place romp in the feature.  Saldana continues to get comfortable in the car.

“My Dixie Chopper doesn’t go half as fast as this thing does,” joked Saldana.  “I just haven’t been behind the wheel of one of these very much.  When you get to tracks like here and Eldora, they are technical and hard.  You can’t just think you are going to jump in one of these and be successful.  For us to do what we did tonight, it’s great.  We are very a little team.  This car was sitting in the corner of the shop.  They drug it out two weeks ago.  We went to Eldora for three nights and made the show each night.  We had a really good showing.  Then we came here tonight, the first night out with the 360 and put it on the podium.  It’s fun when things are rolling.”

Saldana knows he’ll have to be on his game Saturday night if he is to have any shot of getting it done in the main-event.

“Honestly, just don’t make mistakes,” commented Saldana when asked about what it will take to win.  “That will be the biggest thing.  McFadden has been on his game here lately.  He’s been running with Outlaws and the Outlaws just make you better, better, better.   They beat you up and then he goes to the All-Star races and knocks two of them off.  He came here tonight and maybe the restart helped him like it helped me.  He’s doing things right.  Brian Brown, to me, is the class of the field here at Knoxville.  Seeing them two guys and we were right with them, we aren’t too far.”

Saldana was quick time with a lap of 15.993 for the 55 cars entered for Friday night…

Brodie Tulloch was the first flip and the first true caution of the night.  Tulloch got upside-down during the B-Main in turn three.  He was unharmed…

Matt Juhl was impressive in the A-Main.  Juhl placed second in the B-Main earning him the 22nd starting position.  He drove his tail off in the feature to finish eighth…