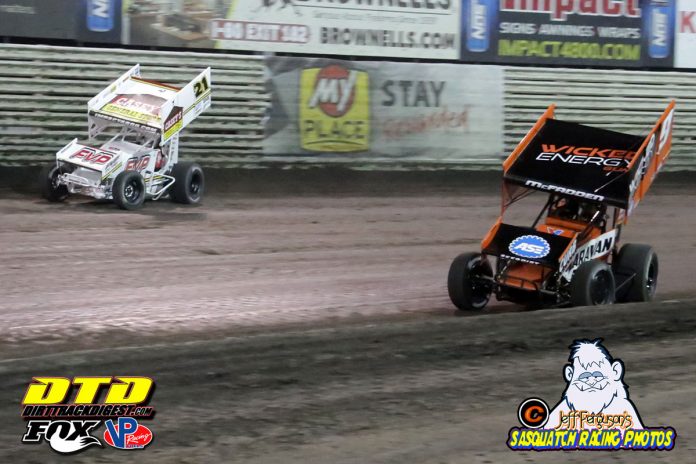 The good times just keep rolling for James McFadden at the Knoxville Raceway. One night after earning his first ever Knoxville win, the Australian native backed it up with his first ever win in the 360 Knoxville Nationals.

McFadden won in convincing fashion holding off the best Knoxville has to offer in Brian Brown. Brown went after him relentlessly. Each time McFadden had more than enough. Brown led just two laps of the 25-lap A-Main with McFadden leading the rest of the event for the $15,000 payday.

“To take that off the list is pretty special. It is something that I’ll remember for a long time.”

McFadden was dominant on the bottom during his qualifying night action. He believed that was the key to success in Saturday’s feature was going to be the bottom. It worked early, but Brown showed him the top was the fast way around by taking the lead. McFadden regrouped on the bottom to take the lead before making his way to the high-side.

“We just kind of committed to the bottom, it just wasn’t really working for us. I kept watching the big screen and Brian got faster, faster and faster up there. I just decided to move and lucky enough we moved at the right time. I could see him there a couple times off of four. We just got up there and pounded it. It was a tough race out there.”

It may have been a tough race, but McFadden was able to get it done for the win.

It certainly wasn’t for lack of effort that Brian Brown didn’t get his second 360 Knoxville Nationals win. Brown pushed McFadden every step of the way only to come up one spot short of the win. He’s night started rough with engines woes in hot laps, but his team recovered and gave him a shot at the win.

“We are disappointed with second, but we are not ungrateful because of the quality of cars and things like that,” cited Brown. “Hats off to my guys for changing that engine. It’s obviously not how we had it planned. Adversity builds strength. We did a good job.”

Brown actually led laps three and seven in the main only to have McFadden rally back around him. Brown was beating the cushion with McFadden working low. Once McFadden cleared Brown the second time he went to the top blocking Brown’s path.

“I got to James a couple times,” said Brown. “I thought about maybe moving to try and get him… to take the air off him and to get him to move. He was able to get back by and got in line. Once he got in line up there, dirty air with these cars makes my car a little bit tighter. I just could never get back to him.”

Brown felt like his best opportunity came in the final laps of the race. Brown got a big run down the fronstretch and got to the rear bumper of McFadden. McFadden crossed him up going into the first turn causing Brown to bobble slightly. That was enough to cost him the win.

“Probably the biggest run I had in the latter part of the race was coming to white,” mentioned Brown. “I was either going to try to slide him or put him at Casey’s for a fill-up. I was going to give it all I had at that point. I was out to make a nice arc in there and I was going to slide him to win the race and at the last second he turned back right.

“I was in really dirty air. I got into the cushion and tried to cut back across. I didn’t get the run I needed. I got a pretty good run down the backstretch and he blocked like he should across the middle like he should have.”

Johnson Goes from Near Retirement to Third in Nationals

Wayne Johnson admitted after the event was over that he nearly called it a career during the off-season. The Oklahoma native was ready to hang up his helmet. His car owner talked him into continuing. Once he made that decision Johnson put himself on a strict routine of eating healthier and working out. That has made a world of difference for the soon to be 48 year old driver.

“I’ve been doing this a long time,” said Johnson. “No kidding, I was quitting last year. I had enough. I didn’t feel good in the car and I wasn’t fast. The car owner told me I wasn’t quitting…I just told myself if I’m going to do this I got to get in shape.

“I really started working on myself. My mental program is way better in the car. I remember last year I was fat and I’d get 15 laps in and I’d get to huffing and puffing. I could not concentrate on driving the race car because I was concentrating on breathing.”

The off-season workout routine improved his game as the former multi-time winner came back with a strong third place run. He was as good as the cars in front of him, but the lack of cautions never gave him a chance to mix it up with McFadden or Brown.

“We got to fourth there right on the start,” mentioned Johnson. “It took a few laps to get by Joey and that let these guys kind of get out on us. I felt like we were gaining there about midway and really started catching them. I closed down about half a straightaway on them in about five laps. I just got to trying to hard. I about knocked the fence down two or three times trying too hard.”

The night started out with the E-Main which was won by Robbie Price. Spencer Bayston won the D-Main while the C-Main went to Jack Dover. Gio Scelzi earned the victory in the B-Main…

United Racing Club regular Curt Michael was scheduled for the C-Main. He did not return…

Cody Ledger, Matt Covington and Matt Moro were involved in a hard fronstretch crash at the start of the C-Main. Ledger took a series of tumbles. Everyone walked away unharmed…

Clint Garner went for wild ride in the B-Main after contact with Blake Hahn. The pair came together exiting turn four sending Garner up into the fence. He wasn’t hurt, but the program was stopped as safety crews repaired the fence…

Devon Dobie had his Nationals come to an end in the B-Main when he hopped the cushion in turn four causing him to go over multiple times. His got out under his own power…

Austin McCarl won the Hard Charger award for advancing 10 spots in the A-Main. He started 21st and finished 11th…