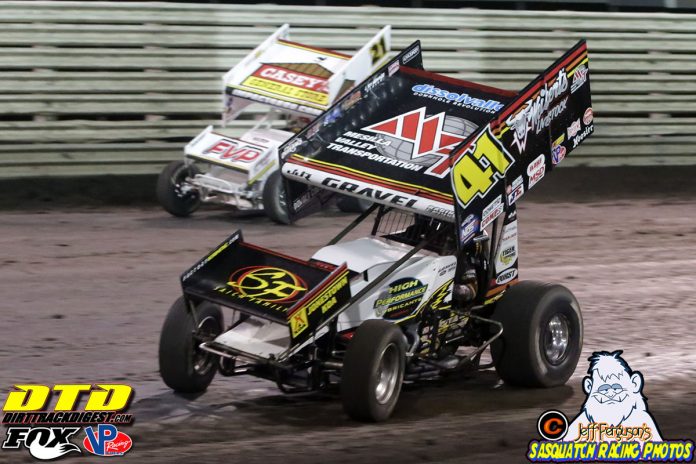 Sunday night’s 25-lap Capitani Classic was the perfect start to the 2019 edition of the Knoxville Nationals.  David Gravel took on Knoxville regular Brian Brown in an instant classic.  The duo swapped the lead numerous times with Gravel getting the best of Brown late for the win.

The win builds some momentum for Gravel and company as they prepare the 59th running of Sprint Car racing’s richest race.  He hopes it is a sign of things to come later in the week.

“Brad Sweet won the Capitanti last year and won the Nationals,” stated Gravel.  “It definitely has something to do with how good your Knoxville Nationals is going to be, but not everything.  We could easily unload and struggle or the track could be completely different.

“It’s one of those things where we got notes for this kind of racetrack.  Obviously, on the prelim night’s its usually a little bit heavier.  Tonight it was very slick.  Even lately the Saturday nights aren’t this slick.  We’ll see what happens. We’ll just take what they give us with the racetrack, hopefully make the right calls and have a good night.”


Gravel gave up the lead after a couple of different restarts.  On each green flag he ran a different line and both times the decision proved to be wrong.  The track was pretty equal from top to bottom causing Gravel some confusion on which lane to run.

“I just didn’t know where to run,” said Gravel.  “The one restart I ran low and he passed me up high.  The next restart I thought, ‘man I got to run high,’ and everyone passed me low.  Luckily I had a good enough car to make moves and pass guys back.

“I feel like it’s pretty hard when you give it up against good guys to get it back.  We were able to do that and capitalize on that.   A lot of times you don’t get second chances, luckily we did.”

Gravel gave up the lead on the final race restart, but he was fortunate to find a groove one lane off the bottom.  That allowed him to drive back by Brown in turns one and two to take the lead and eventually the win.

“There is something about this dirt,” mentioned Gravel.  “Whenever dirt gets thrown up, it’s grip on the race track.  With everyone running the bottom I was able to use that.  Instead of holding the car down, that’s the biggest thing, a tight radius on the bottom.  Just trying to hold it, hold it, hold it there.

“If the car is not operating or rolling down there you are breaking your momentum so bad.  Me being able to go up a carlength just opened up the corner.  To just a run a smother arc and not upset the car and it worked out for us. Not all the time that lane is there, but tonight it was.”

It’s been a full week of second place finishes for Brown.  Sunday night was his third consecutive second place finish in the last three races at Knoxville.  He wasn’t happy with it, but he wasn’t using the same car he’ll run in the Nationals.  He feels like that car is better than the one they ran Sunday, so he’s looking forward to that.

“This is not our Knoxville Nationals car,” said Brown.   “We have a car that we ran the Outlaw show and won.  This car is a little different acting than the other one.  I feel like once we get that thing back out we’ll be a little bit better.  Overall, I’m excited about that, any time you lose you can learn.

“If anything, it fuels us up and we are excited about the rest of the week and the weekend, but overall three nights, thee seconds, we are disappointed.  But like I said last night, it’ hard to be ungrateful because third, fourth and fifth can come and C-Mains can come.  We are just going to ride the momentum and enjoy it.  We are going to try and enjoy the whole week and have some fun.  We’ll see what happens come Saturday.”

Like Gravel, Brown wasn’t sure what lane to run on the speedway.  He tried nearly every groove, but focused on the bottom because he knows he has to be on his game in that groove if he wants to win the Knoxville Nationals.

“I probably should have gone to the top the whole while, but I was making a conscience effort to run the bottom,” cited Brown.  “Event if it’s even or little less on the bottom I wanted to get laps, laps, laps.  You aren’t going to beat Donny Schatz, Brad Sweet or Gravel by pounding the top for 50 laps.  I was probably on the wrong part of the track there at the beginning.

“I was not as good as I needed to be.  When he got by, I actually drove back by him there and got the lead.  We got the lead late; I just didn’t know where I needed to be.  We got to lapped traffic and I just got slowing down so much on the bottom.  If he was going to beat me I was going to make him go around me on the outside and Gravel just went a car lane off my right rear.”

Hopefully for all Gravel and Brown, the Capitani Classic is a sign of good things to come.