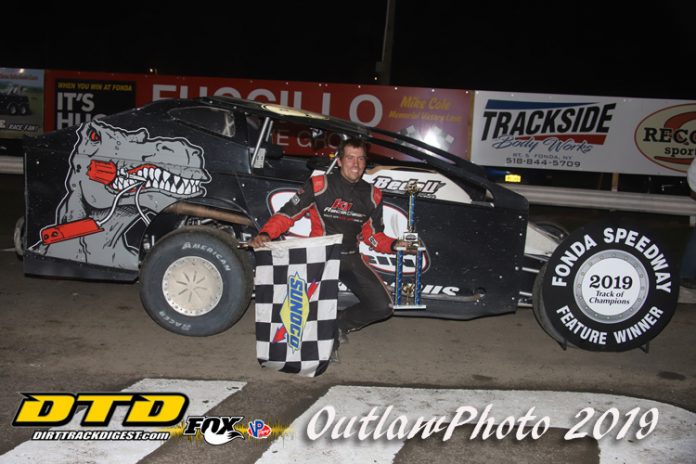 FONDA, NY- For the past few seasons, Danny Varin seemed to struggle behind the wheel of his No. 93 Magsarus big-block modified.

One week removed from a right-rear tire that left both himself and his team feeling slightly deflated with a runner-up finish, all sorrows were erased in convincing fashion Saturday evening.

The second-generation driver, and hometown Fonda favorite, returned to weekly competition at the famed Fonda Speedway this season and proved that like his father, he knows how to get around the fairgrounds oval as he locked up his third victory of the year over newly-crowned Modified track champion Rocky Warner.

Steve Akers and Korey Wilder brought the field to the initial green flag of the 30-lap contest with Wilder grabbing the advantage by the completion of lap one.

Though horsepower and handling seemed to abound without limit, Wilder’s lead would be short-lived as rising Modified talent Cody Bleau drove to the inside of the No. 121 coming off of turn four and assumed the top spot with six-laps complete.
Wilder wasn’t willing to surrender quite that easily.

A quick caution on the following circuit bunched the field up and on the ensuing restart, Wilder quickly retook the top spot heading through the west end of the speedway with Bleau hot on his heels along with Dave Constantino and Fonda’s fastest mom Jessica Friesen closely in tow.

After a fairly brief yet heated exchange, Bleau once again moved to the top of the running order with heading through turn two on lap nine.

On the following circuit, Dave Constantino pulled off what can only be considered as the move of the night with a brilliant pass coming off of turn four that moved the Hoyenga owned No. 34 from the third position on the inside line to challenging for the lead at the end of the front stretch on the outside of the speedway. With more than enough side bite and forward bite in his DKM chassis, Constantino took the lead by the time the field reached the backstretch and quickly opened up his advantage over his teammate Cody Bleau.

Like Wilder before him, Bleau wasn’t willing to surrender the top spot that easily either.
Another caution on lap-13 erased the sizeable advantage that Constantino possessed over his competitors and on the return to green-flag racing, Bleau grabbed the advantage heading into turn one and regained the top-spot with seamless ease.

Then, like a Kansas tornado, all hell broke loose.

Heading through the second turn, Bleau bobbled and temporarily lost the handling on his No. 73 causing a brief four-wheel slide up the racing surface. With no where to go, Constantino’s left front found the outer circumference of Bleau’s right rear sending the former into the back-stretch wall and the remainder of the field scattering like a poorly planned Chinese fire drill.

Needless to say, Constantino’s great run came to a sudden stop relegating the second-generation driver to an 18th place finish.

While all eyes were on the battle for the top position over the first 13 circuits, others were paying attention to the heavy hitters silently moving their way up through the running order. In short, Danny Varin and Rocky Warner were coming and they were both coming in a hurry.

With Varin, who started 11th on the grid, now second in the running order, the ‘T-Rex Express’ found itself in prime position for a quick strike at the leader. Heading through turn two on the following restart, Varin did exactly that as he moved to the outside of Bleau and grabbed the lead heading down the back-stretch.

The final caution at the midway point of the 30-lap affair stacked the field once again but Varin took off with ease and quickly stretched his lead over all challengers. Though Rocky Warner, who started with Varin in the sixth row, moved into the runner-up position and began to slowly reel in the leader through lapped traffic with only a handful of laps remaining, Varin would not be denied as he convincingly drove to his third victory of the season at the ‘Track of Champions.’

“We were pretty good right off the hauler tonight,” stated Varin after his victory. “I didn’t get hotlaps tonight because I was late getting here from work but after the past few weeks, I’ve been really comfortable with what we have in the car and we really haven’t changed anything which has been beneficial so right off the bat, we were pretty good.”

Though he hasn’t changed anything on his HigFab chassis per se, last night’s impromptu weather may have forced his hand a little bit. With a small rain shower coming through the area before his feature was scheduled to roll off, the duo of Varin and car owner Ed Munger were a tad busier than they had anticipated being.

“We made a few changes before the feature and then we had to change them all back when the rain came,” explained Varin. “We ended up running the same set up in the heat race that we ran in the feature. Usually when you get a faster track it’s one lane, follow-the-leader racing but tonight, the track was wide and fast. It was a good combination. I don’t know what that rain water does that the regular water they put down doesn’t but the track stayed wide and you could run where you wanted to.”

Patience is a virtue and where racing is concerned, it’s an extremely important item to possess to say the least. With a decade of modified piloting under his belt, Varin has proven time and time again that he has it in spades. Last night was more of the same as he took his time moving from his 11th starting position to the lead and the eventual victory.

“I was kind of biding my time a little,” Varin continued. “I’ve been blistering tires all year here and that’s what hurt us last week so I just took my time and made the moves I needed to make when the opportunity was there and when that caution came out when Cody [Bleau] was leading I told myself that if I have the chance to go for the lead, I’m going to take it.”

And take it he did with a well-known Varin big-block power move that has been seen time and time again at the Montgomery county oval. Time, however, could have been his nemesis again as he snatched the lead away with just over half of the event yet to be run leaving ample chance for a contender to challenge him for the top spot.

“I thought we had a pretty good lead but lapped traffic started to play a role there at the end,” He said. “They weren’t in the way but they put me where I didn’t want to be. I wanted to be on the bottom in three and four but I couldn’t because they [lapped traffic] were there so it was opening the door for someone to stick their nose in there and try to shoot the gap there but the track was so fast that if you hit it right, you could gain six car lengths within a lap or lose it if you missed your mark. I just concentrated on hitting it just right every lap and it worked tonight.”

After taking a few years off from weekly competition, 2019 saw the return of Danny Varin to his old stomping grounds and the decision paid off in the form of three modified victories. Though impressive and satisfying, the room for improvement is there in the form of consistency. It’s a fact that Varin himself has stated time and time again.

“The wins are nice, don’t get me wrong,” Varin stated. “But I want to be more consistent and Ed [Munger] does as well. We’re getting there, it just took a while with the new car trying to figure it out between trying different setups and learning what we need to do in different situations. Being patient has really paid off; it’s been really beneficial.”

2019 proved to Varin and his detractors that he can still wheel a modified with some of the best the sport has to offer. Though the mark of a true competitor often leaves one with a feeling that they are never content, there are moments of satisfaction that become less rare once the proverbial fruits of one’s labor become reality. Danny Varin has reached that waypoint as the season winds down to its inevitable conclusion.

“All in all, it’s been a good year,” concluded Varin with a smile. “The track [Fonda] has gotten better every week and it’s more consistent that it was earlier in the season which helps the drivers a lot and we’re pleased with what we’re able to do here especially against the small-blocks because they are tough when the track slicks off but we had a good year. You won’t hear any complaints from me.”