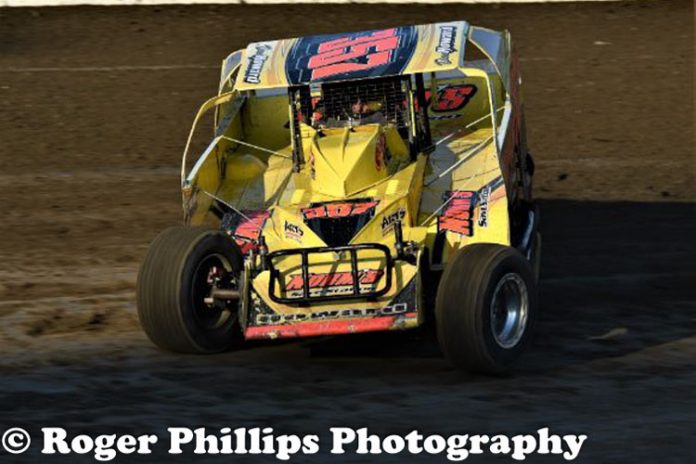 In the illustrious Grandview career of Duane Howard, the one race the Oley, Pa., driver has had trouble winning over the years has been the “Forrest Rogers” Memorial race. Howard has won the race two other times in 2010 and in 2013, but for the most part has never had much luck when it comes to the $10,000 race every August. “This car was so good tonight, I could drive it with the steering wheel and from lap eight to lap 28 it was just so good,” beamed an excited Howard afterwards greeting his many fans and well-wishers in the pits. “This car was under me tonight and I never felt it get away from me.  It was balanced so good tonight. We wanted to get to the front quick and tonight we were able to do that.”

This past Saturday night, Howard and the Norm Hansell No. 357 team was on a mission to grab another victory in of Grandview’s crown jewel races. Howard went out in his heat race and came from deep in the pack to get into a handicapping spot, which turned out to be important with a couple of other usual contenders failing to do so and having to start further back in the field. When the field was ready to roll out for the start of the 50-lap feature event Howard had a plan and executed it to perfection.

Howard starting from the 16th position was on the move early picking off multiple cars lap after lap. A caution on lap 10 brought the field back together and this is where Howard made his move. Starting on the outside Howard went from eighth to third in one quick swoop on the outside and was on a mission to get to the front. By lap 15, Howard had accomplished his mission and was your new leader.


“The restart on lap 10 was key tonight,” explained Howard. “I was able to restart up on the outside and the cars seemed to jumble up on the bottom and I was able to get a good run and make it all the up to second or third and that was the key to getting to the front quickly.”

Once in front, Howard took off and left the field behind him opening up almost a half a track lead over second place. Just as it looked like Howard was going to cruise to an easy victory, the caution flag waved for Jeff Strunk who had suffered a flat tire putting second place runner Frank Cozze and perennial contender Craig Von Dohren right on Howard’s bumper.

“Once I made it to the front, the car was so good I could just pick my lane. The set-up we had in the car gave us so much drive tonight I could put it anywhere I wanted to,” cited Howard. “When we got to the lapped cars I think I overheated my tires a little bit even though I was trying to take my time and work my way through the traffic slowly.”

On the restart, Howard took off with Cozze hanging right with the leader giving Howard no room for error. One lap later it looked like Howard made the mistake Cozze was waiting for as drove his Modified too deep into turn three causing the No. 357 to push up the track allowing Cozze to slip underneath for the lead. Cozze’s lead was only temporary as he couldn’t hold his car down coming out of turn four allowing Howard to slingshot back underneath Cozze to regain the lead. Howard would make no more mistakes as he held his car down low not allowing Cozze to make another move and went on to take the victory.

“I really thought I gave it away there at the end,” as Howard explained what happened as Cozze got by him. “I stabbed the brake going into the turn and the front end just went straight.   I usually kind of ride the brake getting in to the corners but I had dialed way too much front brake in the car after the caution trying to tighten the car up because the last five laps before the yellow the car had started to get free. Luckily Cozze wasn’t able to hold the low line there and I was able to turn the car back down and get back by him. After that, I wasn’t going to make that mistake again and just kept the car down low because I knew the top had gone away and it would be hard to rotate the top.”

With the win, Howard was able to remain on top of the point standings in his quest for a sixth Grandview Speedway title but insisted that points never crossed the team’s mind at all as they were focused on winning tonight and nothing else.

“We’ve been really consistent this year especially over the last two months,” mentioned Howard. “We started out the year very aggressive and then we sort of went driver conservative over the last month or so and were able to take the point lead. Tonight, we went back to being aggressive, we wanted to win this race and let the points fall where they fall.  If we can carry that the next three to five weeks, I think we’ll be right there in title contention. I don’t think there has been one time since we took the points lead that we have thought about it and that’s a good way to race and it let’s the whole race team race at ease. Do we want to win it (points title), yes, we do but we want to win races as well especially tonight’s race and we are going to continue to race the same way. Now when it comes to the last points show you might have to do something different, but we’ll worry about that at that time.”

It was a big win for the team as a whole, but for Howard the win was extra special. Grandview Speedway and the Rogers Family have for the most part always been home to Howard, and you could hear the emotion in Howard’s voice as he spoke in victory lane what the win meant to him.

“I am really proud to win this Rogers Memorial race, we’re missing Bruce but Kenny (Rogers), Tina (Rodgers) and Brad (Missimer) keep this place up and running and over the years the Rogers have done so much for my family and I just love racing here and I love the Rogers family. I am really honored to win this show.”

So far, 2019 has been a trying year for Frank Cozze. Whether it’s been driving the Tom Umbenhauer owned No. 5 at Grandview Speedway or behind the wheel of the Dave Renaldo owned No, 401 at Big Diamond and other specials, it has been a year the driver out of Wind Gap, Pa., definitely would like to turn around. Multiple crashes and engine issues have plagued both teams throughout the year making Saturday’s second place finish in the Forrest Rogers Memorial race even that more satisfying.

You could see that Cozze had a good car underneath him all night long as he looked fast in his heat race and come feature time it was no different as Cozze marched to the front.

“We had a good car all night long tonight,” mentioned Cozze at the team’s hauler after the race. “We finally had our good motor back in the car tonight. We haven’t had it in all year. We’ve been running our backup motor. We have also been running alcohol and tonight we switched it back to gas. With the alcohol we were way to heavy so that was hurting us also.  With the gas you don’t have to load as much fuel into the car and that was a big help tonight. Also, when the tracks get slippery like this, that plays into my deal and it’s what I like plus we had a really good car as well.”

A caution flag with five laps to go erased Howard’s big lead and put Cozze right behind the leader on the restart. Cozze kept the pressure on Howard when the race resumed and forced Howard into an error in the closing laps as Howard pushed a little going into turn three allowing Cozze to take the lead, but Howard quickly crossed back down underneath Cozze to reassume the point and never allowing Cozze another opportunity.

“I didn’t think he was going to go where he went, and it left the bottom open for me. It looked to me like he shoved the nose up there little and I could see he was getting tighter and tighter,” explained Cozze. “Unfortunately for me I drove into three a little too hard underneath him and drifted up the track allowing him to turn back by me. I wish I could have that lap back, but we’ve been struggling all year and finishing second tonight is almost like a win for us, so I’ll take it. Hopefully we can go from here with the biggest race of the year (Freedom 76er) coming and one I really want to win. I’ve won a lot of big races in my career but that is the race I want to win very bad.”

There will be an open pit spot available next Saturday night at Grandview as Jeff Strunk and the Glenn Hyneman owned No. 126 team will head north to the Orange County Fair Speedway to take part in the running of the Centennial 100 weekend starting on Thursday night looking to take home the $100,000 first place prize.

The Hyneman/Strunk team will head north with a newly put together TEO ProCar powered by a brand new LJL/Kevlar big block motor. For Strunk it will be the first Saturday night he has missed at Grandview in many years and the first time he has competed on the “Hard Clay” since the late 1990’s