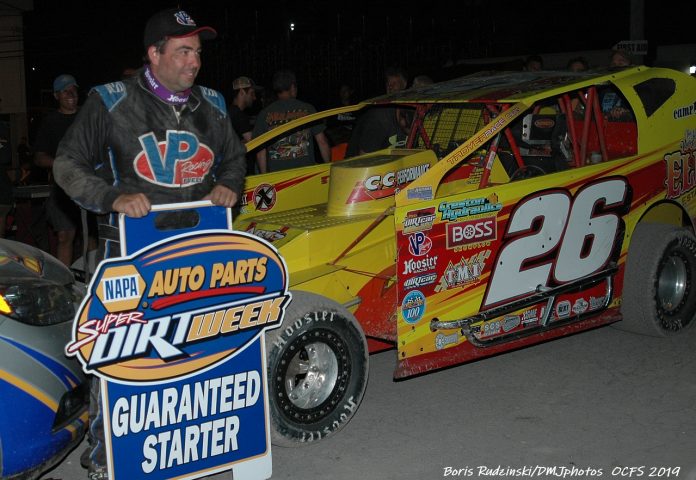 The 2019 season has been a year of learning for veteran Ryan Godown. Always a threat wherever he races in the New Jersey and Pennsylvania areas, Godown, with the help and backing of Steve and Diane Searock, has ventured out to run the Super DIRTcar Series in 2019. Godown knew going into the year that success on the talent laden circuit would be slow to come by.  It’s taken half the season, but the past few races the team is starting to come around.

Thursday night, at the “Legendary House of Power” better known as the Orange County Fair Speedway, Godown made a big leap towards having success on the SDS. The SDS arrived at OCFS at a perfect time for the driver out of Ringoes, N.J. Last Saturday night, the Searock Fabrication No. 26 team decided to test out the new hard clay surface at OCFS at the track’s twin 30’s program in preparation for the Centennial Weekend. In the first twin 30, Godown has a solid top 10 finish. In the nightcap, Godown took advantage of a great restart to outduel Jimmy Phelps and pickup his first ever win at the speedway.

Getting that win was big for Godown as it gave the team the confidence it needed to come into Centennial Weekend. Godown has never been a driver to lack confidence behind the wheel, but winning the race last weekend was a big step for the former Big Diamond Speedway and New Egypt Speedway champion.

“I would’ve never thought in a million years I would ever get a win here (OCFS)” said a tired but happy Godown after the race referring to last Saturday’s win. “It’s still surreal to me. That win did give us a lot of confidence going into this weekend and it paid off.”

Thursday, the team was on the money right from the beginning as the Troyer TD4 chassis was fast right from the start with Godown turning the second fastest lap in hot laps then he quickly backed that up with the fastest time in his time trial group to give him the pole for his heat race. When it came time for his heat race, Godown shot out from the pole and easily sped to victory giving him a coveted redraw spot for the 100-lap feature event.  From there he drove his way to a second place finish ahead of several of the best the Series has to offer.

“Tonight we hot lapped good, we time trialed good, ran our heat race good and it had us thinking we have a good race car,” commented Godown.  “We were able to draw a good starting spot and that always helps with these races. We had a fast car, but who knows what would’ve happened if we had to start further back.”

Qualifying has been the team’s albatross throughout the SDS and Godown knows that is the key to the team getting better as the year progresses.

“You know our dilemma in this series has been that we haven’t been able to time in and when you can’t time into the top three it’s hard because you end up starting from around eighteenth in the feature,” explained Godown. “Starting that far back, it’s hard to get into the top 10 when the top ten guys are the best in the business. So, that makes it really hard to get near the top five when you start that far back.”

Despite the troubles the team has had with qualifying, come race time Godown has been able to work his way to some decent finishes, albeit not all the way to where they want to be.

“That’s what this has been about, we’ve been working hard trying to get qualifying better,” cited Godown. “Come race time we always seem to be able to work our way towards the front.  Poor qualifying forces you to push the car and tires more than you would have to if you started further toward the front and a lot of that is me. Some of these tracks I’ve never been to.  You get four laps to figure it out what’s the right line to run to be able to finish in the top three in time trials. There have been a couple of races where we were fast in hot laps, but not in time trials and that is something I’ve had to figure out. Tonight, we hot lapped second and were able to back that up in time trials.”

Starting second in the Battle of the Midway 100, Godown took the lead from pole sitter Peter Britten right from the start and led the early portion of the race until eventual race winner Matt Sheppard was able to sneak by in lapped traffic to overtake Godown.

“I knew it was going to be tough to hold off Matt, he’s just so good,” as Godown explained the pass for the lead. “I got caught up behind a lapped car and he was able to get by. He (Sheppard) was definitely faster than me tonight and Erick (Rudolph) was probably faster too, but I was able to crowd the inside and hold him off. I almost lost second place to Erick that one lap when I got held up behind Rusty (Smith) but was able to regroup and get back down low before he could make the pass.”

Finishing second between the two hottest drivers in dirt modified racing right now is something the team can build on going forward as the season moves along. With his second-place finish, Godown received a guaranteed starting spot at NAPA Super Dirt Week on October at the Oswego Speedway.

“Tonight was a good night for us and I’m going to enjoy it. Hopefully we can get a top 10 tomorrow night to lock us in for Saturday’s night big race. Once you’re in, anything can happen. I’m just glad we are running good right now. If we can turn our top 10’s into top fives, we can start contending for wins. Running this series along with racing on these Hoosier Tires has definitely made me a better driver and I think it will help when we get back running on the American Racer Tires. Getting that guaranteed spot for Oswego is a good thing for us to have in our back pocket if we run into troubles during qualifying.”

If you follow the SDS, you can tell that Ryan Godown is on the rise, solidly in the top ten in points just past the halfway mark on the series and with the team returning to -some tracks for the second they should only get better.

“It’s been a good year, but we definitely want more. Running this deal is tough. We’ve run the same car and motor every series race so far. We have another car up top in the hauler that is half built with a new motor in it. We should have that car done before we get to Lebanon Valley in two weeks. I couldn’t do this deal without Steve and Diane Searock along with my crew. Running all these series races is hard to do and I wouldn’t be able to do it without everyone.”