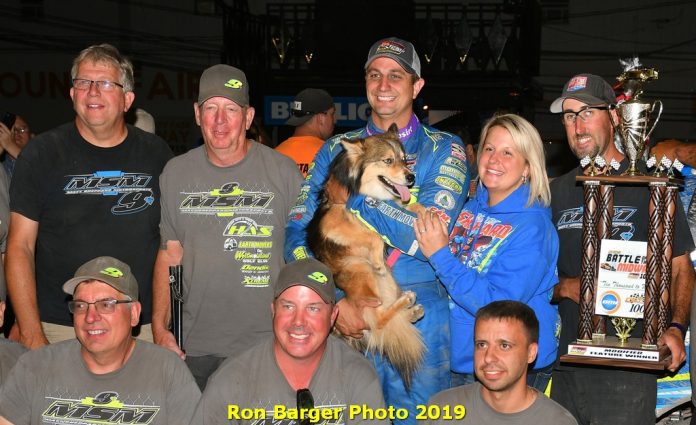 Matt Sheppard has made two appearances at the Orange County Fair Speedway in 2019 and so far, he’s got a perfect record. Sheppard won the Hard Clay Open back in April before winning last night’s Battle of the Midway 100 for the Super DIRTcar Series to kick-off Centennial Weekend.

Coming into 2019 Sheppard had never won at Orange County, but now it seems he has things figured out heading into the biggest weekend of the year for Modified teams. He was good from the get-go. He set fast-time, won the heat and got it done in the feature for a $10,000 payday. Even with that said, he knows he’s got to better if he wants to win $100,000 on Saturday night.

“We had a good car,” cited Sheppard. “It’s a big weekend here. It was nice to unload good. I think that is kind of a little bit of double-edged sword because we can’t get complacent because at the same time everyone else is going to be working to get better. I don’t know, it’s definitely better than the alternative. It’s a good series race, good payday and a good night.”

The win continues another hot streak for Sheppard. Last weekend he swept his home tracks of Outlaw Speedway and Land of Legends Raceway. He then won the big-block Modified portion at Devils Bowl Speedway before taking the 50-lap, $10,000 to win finale. Now throw in the win on Thursday, that’s five consecutive victories for the Waterloo, N.Y., driver. That has him a little nervous moving forward.

“It’s a good time to be on an upswing, but I don’t know,” said Sheppard. “It makes me a little bit nervous being on a five-race win streak going into two big races. You are just waiting for the wheels to fall off, something stupid to happen. Whatever happens, we’ll take it.”

Sheppard started Thursday night’s feature from the inside of the second row in the third position. He got to second early before stalking Ryan Godown. Godown had one hiccup in traffic on lap 26. That was all it took for Sheppard to get the lead. Once at the point, Sheppard made sure he didn’t make the same mistake in traffic moving forward.

“He just tried to pass them lapped cars on the top and got bottled up,” mentioned Sheppard. “I was able to sneak underneath. It made me think twice when I got to traffic. There were a bunch of lapped cars that I got to that I really thought I could drive around, wanted to drive around, but didn’t.

“That was the biggest weight on me, especially in the middle of the race. You catch them gaggle of lapped cars. I was thinking I wanted to go around them, but I knew I had to be patient. Then I’m thinking to myself that someone was going to drive around me. That was the toughest part.”

With one win in his back pocket, Sheppard is hoping that is a sign of a good things for the rest of the weekend. Like everyone else in the pits, he understands the significance of the weekend. Modified drivers have never had the opportunity to race for this kind of money before. It would mean everything to him to win Saturday, but he knows he’ll need everything to go his way.

“It would be huge,” stated Sheppard. “We are obviously having a really good year. It’s a big race. It’s the biggest race that’s ever happened in Modified racing. It would be huge, but at the same time I think you are going to see a lot of strange things happen like you usually do in extra distance races like Eastern States and Oswego. I don’t know. We are going to need a fast race car and luck. Luck might even be more important than having a fast race car.”

In two days we’ll see how it turns out for Sheppard, but so far he’s put himself in the running as one of the favorites to win Saturday night’s finale and the $100,000 prize.