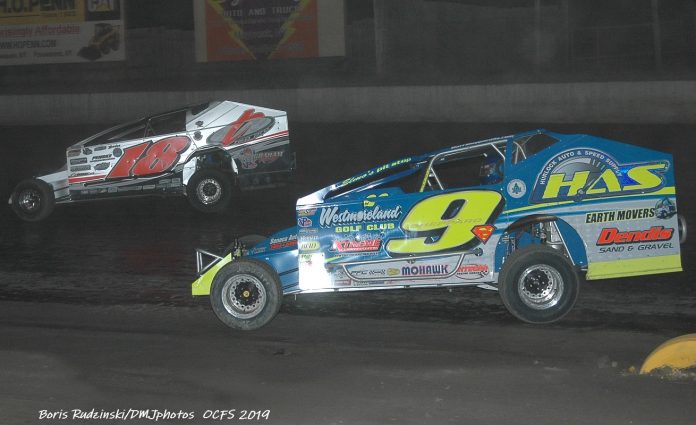 Two days, two wins and $20,000 richer is how the first two days have gone at the Orange County Fair Speedway as part of the Centennial Weekend for Matt Sheppard.  He’s had the dominant car, or should we say cars.

Sheppard elected to run a different Bicknell car in Friday night’s program and that decision paid off with a four second plus victory over Billy Dunn and the rest of the field.  As a result, come Saturday Sheppard and his team have some decisions to make as they try and determine which car they are going to run in the 160-lap main-event.

“We don’t know,” he said late Friday evening.  “We haven’t talked about it yet.  We didn’t know we were going to run this car until we got here today.  The other motor has 1,100 laps on it so we didn’t want to put the extra laps on it.  The other car is old.  It’s three years old and it’s got a lot laps on it.”

The car Sheppard elected to run on Friday night has been good to him this season.  It’s propelled him to several big wins including last weekend at Devils Bowl and now Friday night.  That makes the decision even more difficult.


“This car was an unknown,” cited Sheppard.  “I put this car together at the beginning of the year.  We won Grandview (Speedway) with the spec small-block in April, then it sat there forever.  I ran the Firecracker at Fonda with the borrowed motor from HBR.  Then I think I ran it at Accord before I finally put a big-block in it last week.

The handling on the cars was nearly identical.  Just as he did on Thursday, Sheppard was stronger in the bottom groove than anyone else.  He was able to get the extra drive off the turns to advance his way from seventh to the lead.  Once he got to that point, he checked out.

“I road it out on the bottom,” commented Sheppard.  “I had a good enough car to take advantage of a few things.  Once we got out front, same deal as last night, I tried to stick to the bottom and pass the lapped cars on the bottom if I could.  I think that has been one of our strengths the last two days.  We’ve been able to get lower than everybody else.”

Now, Sheppard hopes whichever car he chooses, has one more win in it as he goes for it all Saturday night in the $100,000 to win finale.  He’s just hoping to keep riding the wave.

“We had 11 in a row at the beginning of the season and now we have six in a row,” stated Sheppard.  “I never won three $10,000 to win shows in a row before.  I don’t know, we’ll see what happens tomorrow.  Like I said yesterday, it seems like Oswego, Super DIRT Week, Eastern States, the Victoria 200, they are always wild card races.  The fastest car wins them 50 percent of the time.”

Right now, Sheppard has the fastest car, maybe even the fastest two cars.  What decision he makes on Saturday could determine if he walks out of Middletown $100,000 richer on Saturday night.