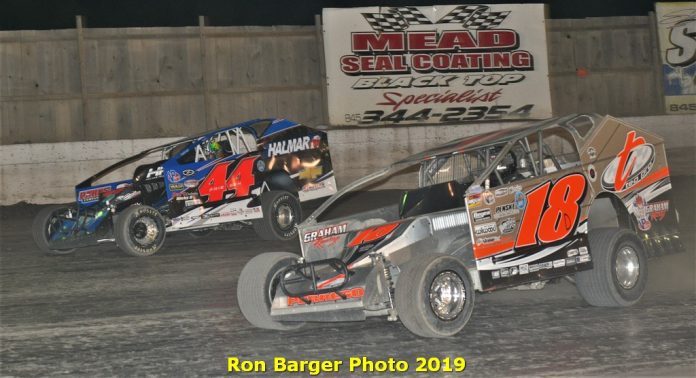 There wasn’t a checkered flag in his hand at the end of the night, but Billy Dunn was one of the happiest guys in the pit area after finishing second in both the small-block Modified race and the big-block Modified feature at the Orange County Fair Speedway as part of Centennial Weekend.

Dunn, from Watertown, N.Y., finished second to Larry Wight in the small-block race with his car while piloting a Ray Graham owned ride to second behind Matt Sheppard in the big-block portion of the event.

“We’ve always had some good runs here, but left here with a wrecked race car or a bent axle or something,” stated Dunn. “We knew we were fast, but we never really finished a race here. This surface plays into our hands a little bit. We have two really good race-cars with my small-block and the great opportunity with Ray Graham in the big-block. His car was great.”

Dunn was sensational in the small-block, challenging Wight every step of the way. Wight concentrated his efforts on the bottom of speedway while Dunn went for it all on the cushion, which included the wall on the outside of the speedway. He nearly pulled it off in the closing laps.

“I think I hit the wall on both the last two laps,” joked Dunn. “I thought I had him cleared once and the caution came out. That was a good race. We had fun. Me and Larry don’t race together too much, but we’ve had some good races for the lead. That was a lot of fun. I gave it everything I had on that last lap. I knew I was probably going to use the wall as a cushion. It just didn’t quite give me a enough.”

In the big-block main, Dunn utilized the high-line early. He knew it was going to eventually fade.  He used it while he could to drive from row three to the lead. He battled hard with Stewart Friesen for the top position before Sheppard entered the fray. Sheppard drove by him in traffic and that was it.

“The big-block I went up there at the start of the race and ran the top for 10 laps and drove right to the front,” commented Dunn. “I knew it wouldn’t last. I got down and led some laps. Matt did what Matt does, he got me in traffic. Lapped traffic was a struggle at best. That is Middletown. It is what it is, but we’ll go after it tomorrow.”

After the strong showing Friday night, Dunn is excited about what Saturday night is going to bring. He wasn’t even planning on bringing his own equipment until the opportunity with Graham popped up.

Dunn’s focus now turns to the finale on Saturday night. He wasn’t as good as Sheppard under the longer run, but he was the best of the rest as he had nearly a straightaway lead on the field. He’ll hope to improve Saturday while adding a once in a lifetime $100,000 paycheck to the resume.

“That would be huge,” he said when asked about winning at Orange County. “It would be every bit as big as our win at Syracuse. I’m looking forward to it. I’m pretty confident. That nine car is going to be tough beat, but he’s beatable. In 160-laps anything can happen. We are going to give everything we got.”

With the way Dunn looked on Friday night, expect him to be a factor come the conclusion of Saturday night’s’ finale at the Orange County Fair Speedway.