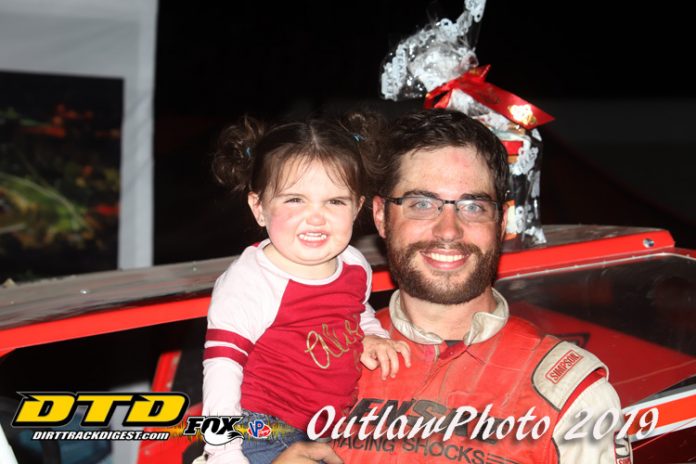 Larry Wight and Billy Dunn put on quite a show last night for the fans at the Orange County Fair Speedway. Both drivers occupied the front at the drop of the green and at the end of 25-laps those same two drivers crossed the finish line in the same exact positions in which they started. But what happened during those 25 laps was classic racing.

Wight and Dunn battled back and forth with Wight hugging the inside and Dunn up on the extreme outside. Dunn could pull alongside Wight coming off the turns but was never able to find that little extra to make the pass. Coming to the checkered flag, Dunn gave it one last blast coming out of turn four, but Wight had just enough to edge him out by half a car length to take the win in a race that had the crowd on their feet and cheering loudly. For the Phoenix, N.Y., driver it was his first ever win at the legendary “House of Power.”

“The race with Billy was pretty good there,” cited a very happy Wight afterwards. “Our car was just good enough to get him there, especially on the restarts and that was the key. This car has been good for us all year.  I think we have six wins at Fulton with it and it just keeps getting the job done for us.”

If you have watched Wight race throughout the years you know that Wight is usually the car up high on the track trying to sweep by his competition but tonight the driver known as “Lightning” Larry Wight knew his No. 99 LJL/Kevlar powered Bicknell chassis was better on the inside tonight and that is the lane he rode to a nice $4,000 payday.


“I tried the outside early on and it was okay,” he said.  “I thought with the track prep they did it would’ve been a little better and it was for awhile. It was just good enough where I could stay with Billy, but the bottom was just better for my car tonight.  Once I got the lead back I just stayed down on the bottom and it paid off for me tonight.”

After his small-block win, Wight went out and drove a strong race in the big block coming home with strong fifth place finish.

“Our big-block was good tonight, I thought we had better then a fifth place car but we caught the inside wall coming out of turn two there and got a left front flat,” explained Wight. “Stewie (Friesen) did the same thing so we both finished the race on flat left fronts. I don’t think we had anything for Sheppard, but I thought we could’ve raced with Billy Dunn there at the end.”

With all the preliminary races behind Wight, it is now time to look towards tomorrow night and the big $100,000 payday.

“Now it’s onto the big one. Not sure how it will all play out yet,” mentioned Wight. “We used the small-block race tonight as kind of a test session for tomorrow night. We”ll take some stuff we learned on the small block car tonight and apply it to the big block for tomorrow and see what happens. I think what we’ll really have to do is pull a couple of plug wires off to slow the motor down.”