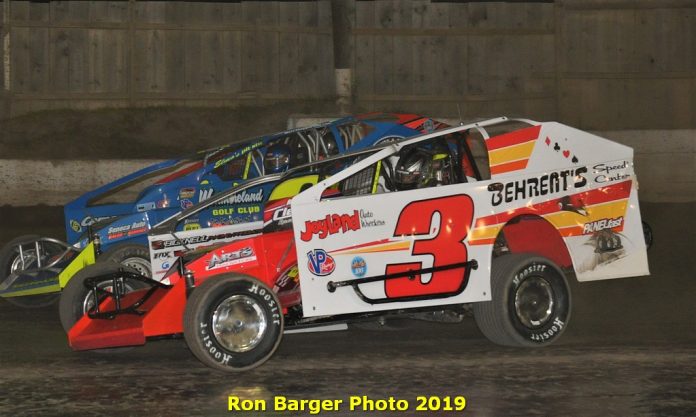 Mat Williamson has had a great year so far in 2019 with a total of 13 wins on his resume, he would like nothing better that to add to that total with a win in tomorrow’s Centennial 100 at Orange County Fair Speedway and taking that big $100,000 check back across the border into Canada.

To do that though, Williamson and his Jeff Behrent owned No. 3 big-block Modified will have to step up their game a little to defeat what has become the prohibitive favorite for tomorrow in Matt Sheppard. The No. 3 team has been very good with an eighth-place finish in yesterday’s SDS race and backing that up with a pair of top tens in both today’s small-block race (4th) and big-block race (6th). While happy with the runs they had this weekend, Williamson knows the team has to step it up in a big way tomorrow to beat the likes of Sheppard.

“We had a decent night tonight, I like it when the track is slick like it was tonight,” cited Williamson. “I felt both our small-block car and big-block car were good enough to win either race tonight at certain points of the race. Now we have to put together a car that can do 160 laps tomorrow and that’s going to take a lot of work. I thought we had a shot in the small-block race then the 21 car (Gary Edwards) went from the top to the bottom on that one restart and messed us all up with Stewie (Friesen) getting the worse of it.  I’m glad to see he’s okay.”

This weekend has been a total team effort between the different teams that Williamson drives for and he knows it will take a total effort to get the No. 3 ready for tomorrow’s once in a lifetime feature race.


“We’ve been working our butts off this weekend and it really shows how good of a team we have behind us,” explained Williamson. “Everybody’s came together to help; we have Spot from the Buzz Chew team down here giving us a hand along with guys from the Coco team and of course Jeff’s team as well. I really can’t say enough about how well we have all worked together and I am very fortunate to have everyone behind me to put us in a good spot for tomorrow. “

With the combined finishes from both nights, Williamson has locked himself into tomorrow’s race but hopes he doesn’t have to fall back on that to make it in.

“It’s nice to have that if you need, but really, we don’t want to have to use it unless absolutely necessary,” mentioned Williamson. “We were just talking about that and it’s good and all, but to use that means we’ll be starting worse tomorrow than we’ve started the last two nights and with the track the way it is that will make it tough.”

With the domination of Matt Sheppard the past two nights, Williamson knows it will take some strategy and some luck to win the biggest race of his lifetime.

“I honestly wish it was a longer race so strategy had more to do with it,” commented Williamson as he talked about tomorrow’s main event. “Right now, nobody is going to beat the No. 9 car. At least when there’s some strategy involved you can gamble on some things. Matt has a really good car and we’re going to need to think real hard tonight to come up with something to beat him.”

The name Brett Hearn is synonymous with victory at the Orange County Speedway, especially when it comes to long distance events. The track’s all-time win’s leader can always be counted on to be in the mix when it comes to taking the big money from Orange County. With the track’s and the sport’s highest paying race ever on the horizon for tomorrow, it looks like it will take herculean effort tomorrow from the No. 20 team to accomplish that feat. Hearn has struggled the past two night in his big-block and knows he will have to make some changes to compete for tomorrow’s big money.

“Our small-block car tonight was good, but for some reason our big-block car was out to lunch tonight,” explained Hearn. “I think a lot of it had to do with track.  There wasn’t much out there tonight. In the small-block race the track was really good and real racy, but the big block race was just the opposite.”

Hearn talked about the key for tomorrow night’s race and how he has to better to give his team a chance to win the big money.

“We have to qualify better, there is no doubt about that. Track position will be huge. This field is so stacked that if you don’t start near the front with the track being as narrow as it is you will never get there.”

Stewart Friesen made his first start on the new surface at Orange County on Friday after missing Thursday night action to compete with the NASCAR Truck Series at Bristol Motor Speedway.  Friesen was good early in the big-block Modified feature before sealing up a tire and then getting into the inside wall.  He held on to finish in third.

“The right rear sealed up, then I clipped the inside wall in two lapping somebody and got a flat left front,” stated Friesen.  “I was just hanging on.  It was really racey early.  It was awesome.  It was fun running the top for the first 20 laps or so.  It got too dirty I guess.”

Friesen thinks they have a handle on what they need to do in order to improve on Saturday night as they look for $100,000 and another big win at Orange County.

“We just need to work on tire prep a little bit to keep it underneath of us for long race,” mentioned Friesen.  “As soon as I got racing with Billy (Dunn) there I could feel the right kind of seal up.  I knew I was along for the ride.  I got the lead and was rolling the bottom and went to the outside to pass one of the lapped cars and both those guys scooted back by.  Then I hit the inside wall.  Would a, should a, could a … I don’t know if we stayed on the bottom if we could have held them off or what.  We’ll try again tomorrow.”

The small-block race he was good from the green, but it ended with Friesen in the wall with a destroyed race car.  He was in the wrong place at the wrong time with CG Morey’s No. 14.

“I feel bad I tore up CG’s car,” he said.  “That thing was fast.  We were rolling up through there pretty good.  It was the same thing.  The top was really good, but it would get dirty after a couple laps.  After a restart you could make a charge and we were making a pretty good charge there.  I guess (Mat) Williamson got crossed up and got into the car inside of him.  It was a hard lick.”