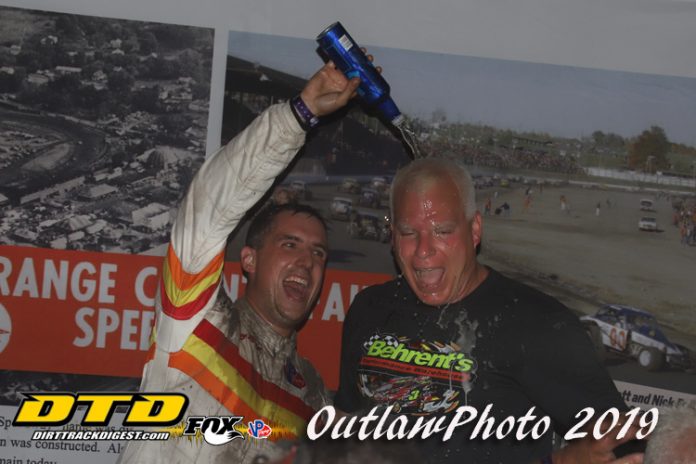 Mat Williamson and Jeff Behrent have been close to winning races together in the past at Orange County and with the Short Track Super Series. Each time they’ve watched them slip away in the closing laps. Whether it was the last lap pass last year at Thunder Mountain Speedway or any other number of late race challenges costing them wins, it always seemed that something prevented them from finding the pinnacle of success.

In 2019, leading up to the Centennial Weekend at the Orange County Fair Speedway it was more of the same. More close calls and near wins, but with all that the team never stopped digging and never stopped trying to get better.

During the Centennial Weekend events at OCFS they didn’t find victory lane on Thursday or Friday, but their Bickell car was good. Adjustments were made, confidence was built and at the end Williamson and Behrent won the biggest race in the history of Modified racing. They won $100,000 and a permanent place in racing history.

“This makes the year right here,” commented Williamson from his trailer afterwards while he sat in his beer covered firesuit. “I never would have dreamed we’d win a race like this. You come down here and there are 69 cars. Everybody is good. Nobody has bad equipment. Everyone was here ready to win $100,000. For us to be here at the end is the best thing that has ever happened in my life.” Like Williamson, the win meant the world to Jeff Behrent. Behrent grew up at Orange County. He spent countless Saturday night’s watching his dad Harry race as a kid before eventually getting involved and owning cars himself. Like Williamson, he was still in awe of the accomplishment hours after the final checkered flag.

“It’s our first win together,” stated Behrent. “I said to him, ‘how do we ever top this now?’ What a way to go. This is just awesome. Growing up as a boy here with my dad racing, all the history, the time I’ve spent here and to be able to take this home with us and celebrate … I don’t know how to feel about it. You can’t do anything bigger than this in the racing world for us.”

It is Williamson’s first ever win of such a big event. He’s watched over the years as others have claimed victories in Modified racing’s crown jewels. Drivers like Stewart Friesen, Matt Sheppard and most recently Larry Wight at Oswego. He can now add his name to that list. He’ll more than likely go down in history as the only driver ever to win a $100,000 Modified feature.

“A place like the Mile (New York State Fairgrounds) will never be replaced and to win there would have been cool,” commented Williamson. “I look at the pictures of Stew in victory lane, they pop up on Facebook every once in a while. You see the emotion. That is tradition. This pays double what that did and means so much. It still hasn’t sunk in.”

Williamson made sure going into Saturday night he had the right mindset. It wasn’t that he didn’t believe in himself, but he needed to have confidence and believe he could get it done. He went back to something that a good friend, Clinton Geoffrey, told him as a kid when he first began his racing career.

“He told me that if you picture yourself doing something, you’ll get it done,” cited Williamson. “Under that red flag I told myself we were going to win it. This is what we are going to do to win it and this is how we are going to make it happen.” Williamson may have started on the front row, but his path to victory was far from easy. He battled in the early laps with Billy Decker. He then fought with Danny Johnson and Decker before watching Anthony Perrego blast by in the final third of the race on the top. He stayed focused, worked to get better and kept finding a way to get back to the lead. He had doubts, but kept fighting.

“Decker was really good early,” cited Williamson. “That goes to back to how good I felt at the start. I was trying to conserve because it was a fuel race. It was 160 laps. Decker was leading and I was hoping he was worried too. Our car has been the same all week. It’s been very good, but there are points where you got to gather your shit back together. If you know you aren’t doing the fastest lane you got to figure something out. You got to find where you need to go.”

When Perrego went by that was a wake-up call. Williamson had no idea how good the top was. He hadn’t been up there for much of the race as his car was good in the middle and on the bottom. With Perrego’s pass he was forced to figure out something better and he did.

“You got to get punched in the face a few times to get up and learn how to fight. When Anthony drove by me, he checked out. He got caught behind a lapped car. I don’t what happened. I told myself to cowboy up, get on the top and figure out how to make this thing go fast.”

He did just that. He got back to the lead with Friesen following him by Perrego to take second. He now had to contend with one of the best in Modified racing on his rear bumper. He stayed true to the top which allowed him to continue to keep Friesen behind him.

Then, on lap 157, he faced his final challenge. A caution was displayed for Friesen, who had plastered the outside wall in turn four. It looked as though he was going to spin, he didn’t so speedway officials allowed him to keep the second position. He was now looking for help from his crew in order to keep Friesen and everyone else behind him for the final three laps.

“I knew I had to get into one and protect the slide job and hope for a good run off a two while hoping he was on the bottom and got pinched off or tried to zing around me. I played out the three laps in my head. It was nerve wracking under the yellow and I was getting mad. I told myself to hit my marks, do everything perfect and don’t f*** up.”

When the race went back to green, Williamson hit the best three laps of his career. He was spot on at the green flag allowing him to keep Friesen at bay. He admitted he wasn’t perfect, but it was close as you could get with $100,000 on the line.

As he crossed the line at the checkered, the relief set in. The money, glory and finally a feature win together had been accomplished. Williamson was still trying to wrap his head around it as he sat in the trailer hours afterwards. It was a surreal moment for the driver from St. Catharines, Ont. “I don’t care if we ever race again,” joked Williamson. “We just won the biggest Modified race in history ever. It still hasn’t sunk in.”

The wait was worth it. The agony of all those defeats and near misses was relieved on one night at the Orange County Fair Speedway. It’s a feeling that can never be duplicated, as there will probably never be another night as big as this for Williamson, Behrent and the entire team, but it’s a night that they will surely never forget.