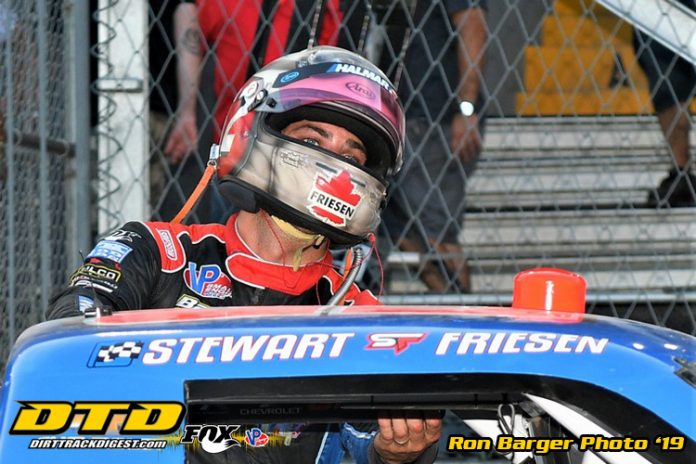 With $100,000 on the line on Saturday night in the finale of the Centennial Weekend at the Orange County Fair Speedway, Friesen was expected to be in the mix for the huge payday at the conclusion of the race.

Friesen, started the 160-lap race in 12th spot, steadily worked his way towards the front and into the top five by the halfway mark. Still biding his time like a master strategist, Friesen kept working his way forward.  When leader Anthony Perrego started to have troubles with 10 laps go he moved to the second spot behind leader Mat Williamson.

With 10 laps to go in the sports largest paying race ever, this is where the stars shine and one of dirt Modifieds brightest stars in Friesen and he did not disappoint. Friesen charged hard after Williamson knowing what was at stake in the closing laps. Friesen was ripping the outside groove trying to make his charge to the lead.  He bounced off the wall a couple of times knowing what lied ahead of him if he could steal the win away.


With three laps to go Friesen made his move under Williamson as he tried to slide under the leader, but he couldn’t hold it down, jumped the cushion and smacked the turn four wall hard with sparks flying allowing Williamson to go back underneath him and pull away.

However, thinking that Friesen had crashed the yellow was put out giving Friesen one last shot at the win with the upcoming double file restart. The damage to the Halmar Racing DKM chassis No. 44 was just too much for Friesen to overcome as he could not keep up with Williamson on the restart having to settle for a disappointing second-place finish.

“We had him cleared and I just messed up the slide job,” Friesen said explaining his bid for the win with three laps to go. “I probably didn’t need to get back to the throttle as hard as I did and should’ve just locked it down there more. There was a real fine line there and I just got the right rear up to high and into the muck.  It just sucked me up into the wall. I got back to him but just clipped the wall way to hard and messed up the front end. The last two laps I was just hanging on.”

Winning this race would’ve been extra special for Friesen, not only because of the money being offered but the Orange County Fair Speedway is currently being run by Friesen’s sponsor Chris Larsen who is the owner of Halmar International which adorns the quarter panel of Friesens No. 44. Not winning for his owner and sponsor just added to the disappointment that Friesen was feeling post-race.

“Winning this race would’ve been extra special for our team,” lamented Friesen as he talked about what his sponsor means to him. “Thanks to Chris and Halmar for everything they do for me and our team and for what they did to put this race together. The kind of purse they put together for this race in unbelievable for Modified racing and it’s most definitely appreciated.”

To this writer it looked like Friesen was biding his time during the race and saving for the end but as Friesen explained that was not the case.

“It was weird how the track played out tonight.  I was charging the whole race, but it seemed the tires would go and stop and then go again.  It’s hard to explain what was going on there. Perrego zipped around me and then Mat (Williamson) and into the lead and it looked like he was going to checkout.

“Then he started coming back to us and I guess he (Perrego) broke something later on, but it was just weird how it played out. It looked like Mat was going to checkout on me then he started coming back to me. It’s very hard to explain what was going on there. It’s the way these Hoosier’s have been racing this year.  They did the same thing at Weedsport during the last Super DIRTcar Series race there a few weeks ago. They go, then then seal and then they go again. It’s hard to get a handle on them some days and it’s kind of crappy because you don’t know what you got race to race.”

Friesen was complimentary of the new racing surface.  Teams were running from the very inner-lane on the track and also way out on the top against the outside fence.  It huge change for past big events at Middletown.

“The track was really good tonight,” mentioned Friesen.  “The surface was wild I’ll tell you that. Who would’ve thought we would run 160 laps at Middletown and still be ripping the fence at the end of the race? Not me, that’s for sure. If you would’ve told me that last year, I would’ve said you were flipping crazy. It’s a cool surface, definitely unique. It was as unique with the old hard clay as it is now with the new clay, but it’s still fun and it’s still Middletown.”

Like others, Friesen was asking for the chance to run the softer Hoosier D300.  That go ahead was finally given on Saturday night and he felt like that made the difference

“Allowing us to run the D300 tire helped out with that as well,” commented Friesen.  “The D400 just polished the track and once that little bit of brown went away on the top there was just nothing up top to use. Today, even with more cars on the track, it allowed us to use the whole track to race on as compared to yesterday.”

As disappointing as it was for Friesen, he knew the team had a good day and still was able to take home $35,000 for finishing in second.

“Winning 35 grand is still a good day for us, but having an extra $65,000 would’ve have made for a better party for sure,” joked Stewart as he talked to his crew in the tech area. I need to thank Chris (Larsen) for everything and my crew as well, they worked their butts off all weekend to try and get this car into victory lane.”