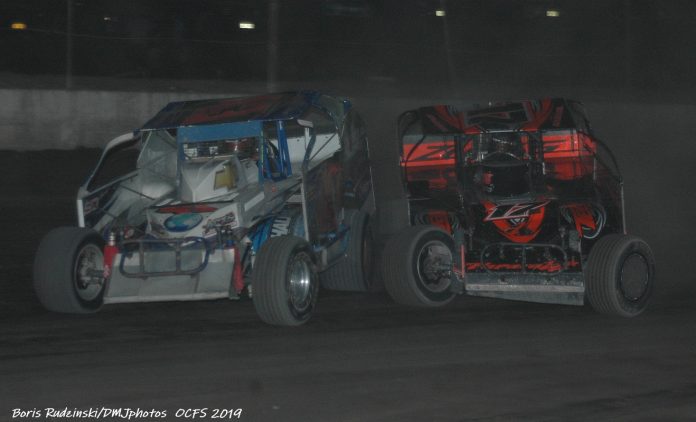 Some drivers left Saturday night’s Centennial Weekend with there heads held high while others left wondering what might have been if things had gone their way. One driver who finally had something to be happy about was 10th place finishing Brian Krummel.

The first two nights of action at the Orange County Fair Speedway were tough for Krummel. He managed only a 24th and a 25th place finish in the pair of events with his Zubi’s Racing ride. He needed a good run on Saturday night.

Thankfully, Saturday was a new day for Krummel and the team. He got into the main-event, had a couple mishaps during the 160-lap affair, but ended up finishing in 10th. He picked the right time to have a good night.

“That was the best I’ve ever driven, by far,” stated Krummel afterwards. “One mistake in the race and you can’t make that. That was the difference in the payout at the end. That was my fault. We were as good as anybody. I’m not disappointed.”

Krummel’s mistake came on lap 76. Krummel was trying to get to the outside of Jerry Higbie to make a pass and he just got over the cushion. That sucked him into the wall causing him to slow and bring out the yellow.

“I got into one good and I hadn’t gone that high,” mentioned Krummel. “He (Higbie) was in the groove that I was working for the last 20 laps. I felt comfortable enough to lay on the gas a little bit harder. I got to his outside, I’m comfortable next to him because I know we won’t have issues, and that’s it.

“I didn’t have it turned enough to hit the cushion the right way. I got it over the berm and stuffed it in the wall. I didn’t know if I broke anything. I came in, get the car checked out, got a couple gallons and had to start all over again.”

Wight Was Hoping for More at Middletown

Larry Wight was hoping for a better outcome to Saturday night’s finale of Centennial Weekend. His night got off to a rough start after some mechanical problems side-lined him in time trials. He started last in the heat and made his way into a transfer position for the main-event.

In the feature he was involved in a crash on lap 12 with several other drivers when heavy rains began falling causing drivers to get the wall in turns one and two due to the wet surface. Wight indicated the team replaced the front-end, worked on body panels and more. He believes there were more underlying issues with the car that they won’t know until they are further able to take it apart.

After numerous pitstops early in the race, he recovered to finish in eighth. Prior the crash Wight felt like he had “a top three” car based on how it was performing at the beginning of the race.

When Mike Gular and his Terry Fanascht owned No. 2A team made the decision to race at Orange County Fair Speedway on Saturday nights, they knew the transition from racing at Grandview Speedway on American Racer tires to the Hoosier tires being run at OCFS would be a steep learning curve. But with the money being offered in 2019 at OCFS, the team
couldn’t pass up the opportunity.

The team has done a good job with the transition and currently sits sixth in the chase for the big-block title and ninth in the 358 ranks. A win has avoided the team so far in 2019, but they have had their opportunities and a feeling that a win is just around the corner.

Another reason the team decided to make the switch in 2019 was so they can get the experience of racing the Hoosier tire in hopes of doing some traveling later in the year. Saturday’s Centennial Weekend finale was the first long distance race the team has attempted this season and despite their 14th place finish they were pleased with the finish.

“It was an okay race for the team,” cited Gular after the race. “We have never run a race of this distance before and it was good experience for everyone. It was good for the team to make a pitstop and see how to get it done.  I think we did a good job. This will help us for later in the year during the Eastern States 200 race.”

Erick Rudolph was running inside the top 10 when his car just up and quite under a yellow. The culprit was a failed MSD box…

Brett Hearn was having a good showing in the feature running in the top five when he exited the track with mechanical failure. In talking to crew members Hearn had motor issues…

Anthony Perrego put on a show coming from the rear of the field after being involved in the major crash on lap 12. Perrego took the lead in the final third of the race. Unfortunately, a stud on the birdcage broke causing the car to flop over onto the left side. He ended up 12th…

Jeff Strunk’s car was cradled off the speedway twice on Saturday. Strunk was involved in the crash on lap 12. The team made extensive repairs to get him back out in the race. Only a handful of laps after the race went back to green, Strunk got too high in turns one and two. His car got out of the groove and slid into the tires in front of the wall in turn one doing extensive damage a second time…

After a successful start to the week in the Super DIRTcar Series event, Ryan Godown’s weekend ended on lap 12 with several other drivers. Godown’s car was battered beyond repair causing him to retire from the event at that point…

Tommy Meier’s No. 66 received some of the worst damage from the rain crash. The front-end of Meier’s No. 66 was bent and twisted with the right front tire on the hood of the car when it was cradled to the pit area.