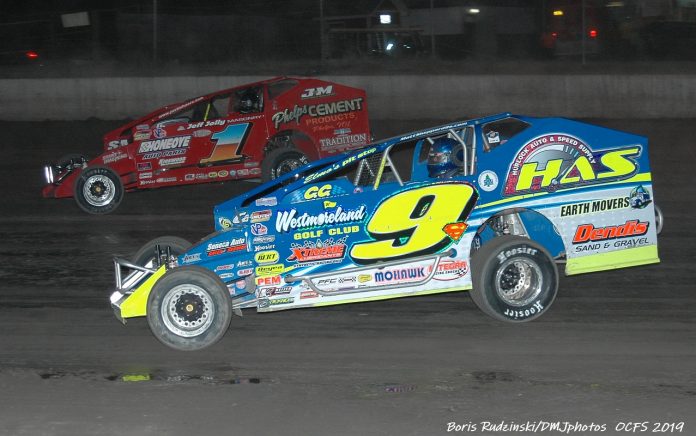 For two days, Matt Sheppard had the perfect “Centennial 100 Weekend” taking place. Dominating wins in both Thursday’s Super DIRTcar Series race and in Friday’s 80-lap big-block special had the Waterloo, N.Y., driver feeling confident going into Saturday’s big $100,000 Centennial main-event. Once the team decided what car they wanted to use in the 160-lap race, it was time to go to work.

Unfortunately, for Sheppard, his fairy-tale weekend came to a crashing halt when he was involved in a multi-car crash on lap 12.  Rains began falling on lap six and then six laps later the skies opened up.  Multiple drivers slammed the wall in turns one and two as they couldn’t slow down due to the wet racing surface.  Several cars were damaged beyond repair.  Sheppard’s car sustain significant damage as well.

This is where controversy erupted.  Originally, all of the teams involved in the crash were told they could work on their cars during the red flag period with no penalty and would also get the spot back where they were running before the crash took place.  After what was previously said to the teams by track officials and over the track’s PA system regarding the crash, track manager Mike Gurda told the teams differently as he made his way to the pits during the delay.

After hearing what Gurda had to say to the teams, Sheppard and the other involved hastily made their way to track manager to voice their displeasure in the change.  The exchange was heated, especially with drivers that had wrecked racecars.  After the race Sheppard was still upset as he talked about what went on during the rain delay and in the weekend in general.  He wasn’t happy with how the rules seemed to change at will.


“Let me first say that all in all we had a pretty good weekend,” commented Sheppard.  “I literally have never seen so much hometown cooking, b.s. in my life. I don’t know how you can change the rules five times during the red flag. They told us what we can do, then told us we couldn’t then that we could again.

“I don’t know what I am more disappointed in. The fact that they told us we could work on our cars and get our spot back because they made us race in the rain in unsafe conditions or the fact that a bunch of teams were whining about it.  Okay, let them whine so send us to the back.  Then they allow them to put fuel in their cars.”

With that being said, the Sheppard team went to work. The No. 9S had suffered major damage forcing the team to pull their backup car out of the trailer to take parts off it.

“I have to give my crew credit for all of the hard work they did to get us back out and into the race,” said Sheppard as he explained the damage. “We had to replace a smashed header, the right rear bird cage, along with the right rear shock, spring and radius rod plus the door, quarter panel and wings. We ended up pulling our backup car out to strip parts off it to get us back out. I’m really proud of the guys, they all worked their butts off to get us back out. I’m not 100 percent sure where the car was, but it was pretty darn close, and it got back up to finish third.”

There certainly was quite a bit of emotion going on during and after the red flag period.  There are many opinions on the matter, but this story is about Sheppard and his thoughts on what transpired and the bottom line was still his quest for the $100,000 paycheck.

“Like I said earlier, I am really proud of my team for getting this car back together so we could go back racing,” stated Sheppard.  “It was really torn up. I would’ve liked to have seen Anthony Perrego win it, he was in the mess with me and got screwed just like I did along with Larry Wight and others. I’m glad we came back to finish third, but still feel like we were cheated a little bit.”

With all that went on in Saturday’s race, the Matt Sheppard Motorsports team still had a very good and lucrative payday taking home $35,000 for their three-day efforts despite everything that took place.

“We had a good weekend money wise, but it could’ve been a lot better and it’s hard not to think about that if they would’ve run things a little better,” said Sheppard. “We showed up here with one set of rules then on Saturday they change the tire rule, doing different stuff to the track and making up rules as they go along. Just typical Middletown BS is what it is.”

It’s a shame when controversy of this magnitude puts a damper on what was an historic weekend for our sport, but controversies are nothing new to dirt racing and to Orange County Fair Speedway. Let’s hope this doesn’t carry on further down the road and everyone can put it past them and move on. The fans and drivers of this sport have long memories and I am sure what happened today will be the topic of conversations for months ahead.