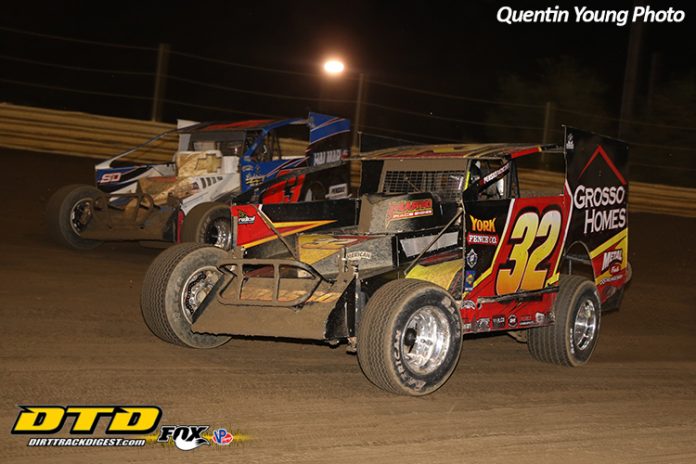 Brandon Grosso gave David VanHorn all he could muster in Tuesday night’s Dirty Jersey 6 at the New Egypt Speedway with the Short Track Super Series.  The Montgomery, N.J., just missed out forcing him to take a career best second place finish with the series.

“I’m pretty happy with the night,” said Grosso.  “It could have been better, but I’ll definitely take second.”

Grosso took over the second spot on lap 26.  From there he had multiple opportunities to get to VanHorn.  He searched high, low and middle, but in the end, he just couldn’t find the right line to get it done as he felt like VanHorn just a bit more motor than he did.

“I was just searching for bite every where I could go,” commented Grosso.  “I feel like we were a little too tight to run the top.  I didn’t want to go in hot and wash up in the marbles and have something happen.  I don’t think I could have got him unless he messed up.  He was a little bit toward the end, but he just had so much motor.  He had a big-block and I had a 430.  He kept pulling me.”


Grosso admitted some of the issues in the feature were the result of some decisions he made prior to the race.  He watched as track crews reworked the track.  He thought the track would stay tacky throughout.  It ended up get slick toward the end of the feature.

“It was my fault,” stated Grosso.  “I made a couple of changes before we went out.  I just didn’t have enough grip coming off the turn.  I had way too much gear and that was my fault.  I put in 18 points.  I shouldn’t have.  I saw it when they ran it in and it usually stays grippy the whole race.  Now, there is no grip.  I feel like that hurt us a lot.  There were a couple of other things I did before the race that didn’t help.”

Grosso also took a moment afterwards to give a shout out to his brother Justin who had a top 10 finish in the companion Sportsman feature.

“I’m really proud of him,” he mentioned of Justin.  “He did a really good job.  The past couple times he’s raced he ended up on the wrecker.   I was happy to see him finish up toward the front racing with a Modified driver Alex Yankowski.  So that was good.”

Billy Pauch Jr., the current high point main at New Egypt, took an early exit from the feature event.  Pauch was involved in a jingle that broke the front end on his No. 96.  It was a disappointing ending for the Frenchtown, N.J., driver.  He was the first car out of the race and finished 26th…

Matt Sheppard had a miserable night.  Sheppard missed the redraw in his heat race event placing him 13th in the starting order.  He advanced all the way up to sixth when he had a right rear tire go down.  Sheppard pitted, made the necessary changes and returned.  He was involved in two more incidents from that point.  He was forced to pit again late in the race after contact with Billy Osmun gave him a left rear flat.  He returned to finish a disappointing 16th.

Even after the difficult evening, Sheppard maintains a comfortable 94 point advantage of second in points Ryan Watt…

Danny Bouc was battling for the lead when a cut right rear tire sent him to the pit area.  Bouc had a stout race car underneath him, but once again the bad luck bug bit.  Bouc returned to action to finish in the 10th spot…

Ryan Krachun was involved in crash on lap 19 severely damaging his No. 29.  The front end was bent and twisted as he was towed back to the pits.  He finished 25th…

Rick Laubach picked up a special $747 bonus as the John Chemidlin Memorial Hard Charger.  Laubach made it from 24th up to the 13th spot.  He ended up earning $1,297 for his efforts Tuesday night.