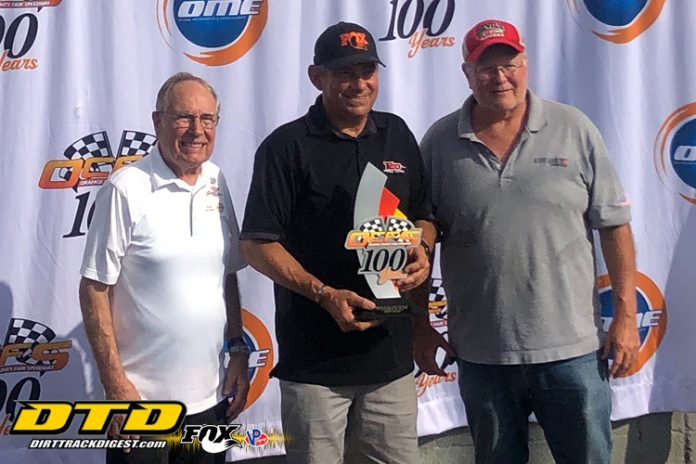 At the House of Power, OCFS and after chasing race cars for nearly 60 years we never thought we’d see a $100,000 event for our Modifieds.  Coming out of the DIRTcar Series drivers’  meeting we joked with Brett Hearn about winning the big one on Saturday, putting his helmet on the roof of his car and announcing he would promote Orange County Fair Speedway; we did get him to laugh.

We stopped to see Danny Johnson and his car owner George Shackleton at the No. 27J, George was busy working on the car, Danny was in the hauler getting ready for hot laps. We talked about the giant payoff on Saturday and his experience at the track.  The Centennial documentary has and episode devoted to the rivalry between him and Brett Hearn at Orange County in the 1990’s Many fans may not realize that Danny is not the same person that raced then, just as many of us are not the same people we were back in our youth. We sometimes like to judge people on their past and not who they are today.

We also spoke with Demetrios Drellos, who on Sunday when we spoke with him at Devils Bowl said he wouldn’t be staying for the weekend at OCFS but said on Thursday he was considering it, depending how he did on Thursday.  Just like many of us, we all have our favorite tracks and our least favorite. Orange County is not one of Demetrios’s favorite tracks. He was one of the few who chose not to return for Friday and Saturday events.  Demetrios is one of the up and coming stars on dirt and we need to turn our attention to the younger drivers as the veterans we’ve watched for years retire.

We also spoke with track co-promote,  Chris Larsen during the race and the first thing he wanted to talk about was the racing at the track. He wasn’t worried about crowd or lack of it. We heard comments from fans on Thursday that they weren’t fans of the new surface however by Friday it was considerably better. Chris Larsen and Mike Gurda have put much effort into the facility and deserve a chance from the fans, not all the negative social media chatter. We hope people understand this is dirt track racing. Friday, the car count didn’t vary much from Thursday, 67 Big block Mods, most of the same drivers from Thursday, only a few left and a few new ones came. Once again Matt Sheppard showed why he is called “Super Matt”, he took another $10,000.  Larry Wight was the winner of the Small Block event on Friday, taking home $4,000.  When we spoke with Tom Deary of DIRTcar on Thursday he said we would love to see one of our DIRTcar stars take the $100,000. His wish came true when Mat Williamson of St. Catherine’s, Ontario, Canada was at the front and took the checker in the big event culminating the weekend activities. One of the biggest thrills for the long time fans of OCFS  was talking with the legends that ran there. On Friday an autograph session brought the likes of Bobby Bottcher, Buzzie Reutimann, Sammy Beavers, Billy Osmun, Will Cagle and of course Gary Balough.  Between Reutimann, Osmun and Balough they have a total of seven Super DIRT Week wins on the Syracuse Mile at the N.Y.S. Fairgrounds.  As for Eastern States wins on the Hard Clay Reutimann won in 1972, Cagle in 1968, 70 and 71 and Balough in 1977. The G.O.A.T. “Greatest of All Time” ceremony brought two of OCFS’s iconic drivers together on Friday for the reveal of who was voted the G.O.A.T. driver by the fans on social media throughout this season.  It came down to Buzzie Reutimann, the late Frankie Schneider and Brett Hearn.  Brett and Buzzie each praised the other on their careers and when Brett Hearn was announced as the winner, by a narrow margin, Buzzie spoke in true Reutimann style about when he was seriously injured and lie in the hospital Brett was one who came to see him.

“I received letters and cards, some with a quarter in them, some with a dollar and some with $25.00 and all from race people, he said.  Race people are the best, if we had more race people in the world, we wouldn’t have all the problems we have.”

Accepting the award Brett talked about the fans that cheered him and booed him throughout his career.   Referring to the boo’s, “I think maybe I finally wore them down”, said Brett.  The ceremony was one we really enjoyed. A 10-lap match race between NASCAR Gander Mountain Truck Series drivers, Stewart Friesen and Sheldon Creed and a guest appearance by former NASCAR driver/owner, two-time Daytona winner and TV commentator, Michael Waltrip was part of the lead up to the big event on Saturday.  Waltrip flew in on Friday night and spent his time with drivers and fans at the 31st Lap on the grounds of the facility and even took a ride on the Ferris Wheel.  Rides were free all weekend.  Friesen won the match race. He is currently in the truck series playoffs vying for a chance at the championship.  Sheldon Creed also tried his hand at qualifying for the 160-lap event in a big block Modified supplied by Friesen’s owner, Halmar International. “What Would You Do?”  We’ve had time to think about the controversy that arose during the running of the 160-lap event on Saturday and realized that through the years things have come up and we might have said things that were out of place.  But in the heat of the moment, it happened and shortly after you realized that you can’t put those words back in your mouth.  On Saturday night many things took place; first rain, then crashes, then an announcement about what would be done, then that all changed and tempers flared.  With the biggest paying Modified race in history on the line, what would you do?  We hope that this can be all worked out in some manner that brings the party’s back together.  This was such a special weekend it would be a shame to have it tarnished.

This Sunday we will be attending the NESCOT Steak and Chicken at the Sportsman Club in Nassau, NY.  It’s always a great time.

In closing we send our condolences to the family of Ray Sitterly who passed away on August 14.