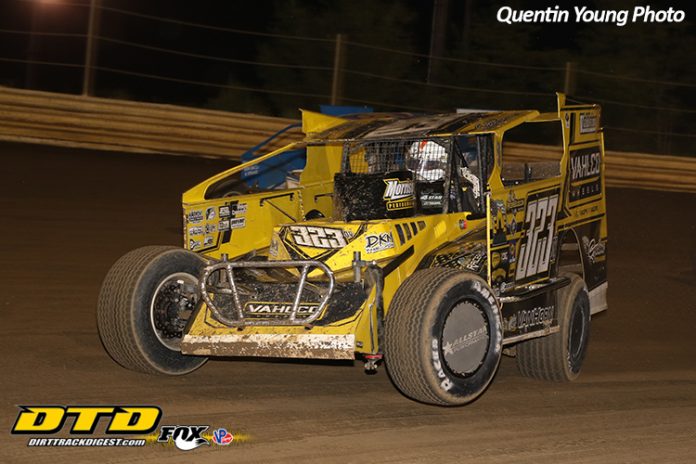 It’s been a different kind of year for the veteran David VanHorn. VanHorn, who is the defending track champion at the New Egypt Speedway, will have a very hard time trying to defend his title in 2019. Not because the Ringoes, N.J., driver is having a bad year, in fact VanHorn has two wins to his credit thus far this season but due to his commitments with his job a Vahlco Racing Wheels, VanHorn has been forced to miss some races this season.

Tuesday night’s Dirty Jersey 6 Short Track Super Series race has been a race that VanHorn had circled on his calendar since it was announced the STSS would return to New Egypt Speedway. With New Egypt being VanHorn’s home track and also owned by his sponsor and employer it was a race the New Jersey driver definitely wanted to win.

VanHorn left no doubt as to who was man to beat Tuesday night as he went out and put on a very dominating performance to take the win and the $6,000 payday. It was VanHorn’s third win of the season and his second career STSS win.

It was a big night for VanHorn and his team.  They did it using an engine combination that doesn’t usually prevail at New Egypt. Getting away from what the team usually races weekly at New Egypt, VanHorn explained his decision to race with a big-block Tuesday instead of the normal 358 spec motor they run weekly.


“We decided to race the big-block tonight instead of our spec motor because we thought that the track would be fast early on with a lot of grip to it and having the big-block would help us with qualifying,” VanHorn went on to say. “Qualifying is the key to running up front in these races, especially with the level of competition. If you don’t qualify good and get into the redraw you might just as well forget it because it’s going to be tough night. Tonight, we were able to do that, we redrew well also and that was the key to the win tonight.”

VanHorn started the 40-lap main event from the third starting spot and immediately put the pressure on early race leader Wade Hendrickson. As the field completed lap five it was VanHorn as your new leader as he started to pull away from the field. A trio of yellow flags kept VanHorn from extending his lead with Danny Bouc moving steadily through the field.

VanHorn stayed in front on the restart on lap 17, but Bouc was now applying the pressure. Bouc continued to work the high side of the speedway and lap 19 was able to go around VanHorn and into the lead. Bouc’s lead would only last one lap as the yellow once again was displayed. On the restart Van Horn was shot out of a cannon and was back in front as the field completed lap 20.

“I saw Danny (Bouc) up top there pretty quick from the start,” cited VanHorn. “I knew if anyone could make the top work it was Danny, I saw the top coming but wasn’t sure how good it would be until Danny went by me. After that I figured I better get back to the top also. On the restart, I was able to find some bite down bottom and the car just took off. Once I went by him, I moved back up to the top and we were good from there.”

The Valhsing No. 323 team came into 2019 using a new DKM chassis in Vahlco Wheels is a distributor of and the team seems to be getting a good handle on their cars as the season progresses.

“Tonight, this DKM Cyclone chassis was good along with the Morrison power,” mentioned a very happy VanHorn as his car was still going through post-race tech. “It’s been a learning process this year for sure, but I think we’ve been working hard to make it better. I have to thank my dad and the rest of the guys at the shop for all of their hard work. I’ve been so busy with Vahlco running that when I get up to the shop it’s usually late somewhere around nine o’clock and I stay till two am and then go home, sleep and start it all over again the next day. Without my dad and the guys, I couldn’t keep everything going.”

Anytime you ask Ryan Watt about racing at New Egypt Speedway a scowl usually comes over his face, not because he doesn’t like the facility but his luck racing at the Central Jersey speedway hasn’t been the greatest.

The last two times the No. 14W has raced there, the car has come home with significant damage due to no fault of his own. Just being in the wrong place at the wrong time has soured Watt from running there. Tuesday night Watt had no choice to tow his Roberts Racing Bicknell chassis to New Egypt as Watt is in contention to win his third STSS South Region title in a row.

“Finishing third here tonight is like a win for us,” said an elated Watt after the race. “We’ve had so much bad luck here recently, so we’ll gladly take a third.”

Running their 358-spec motor, Watt knew it would be a challenge to get into the redraw in his heat with the track being so heavy early on, but he managed to hang on to finish fourth in heat to get into the coveted redraw.

“I thought we had a good car in timed warm-ups, the car felt pretty good,” explained Watt. We brought our spec head motor here tonight, so I was waiting for the track to go away. Then when we out for the heat race I saw they re-prepped the whole track and it was hammer down. It was everything you could look for in power and were able to hang on to finish fourth and get into the redraw.”

Watt was hoping the track would slick off and slow down, but once again the track crew did maintenance on the speedway to put another monkey wrench into the team’s plan for the feature race.

“I saw them prepping the track again before the feature and I said to myself that this track isn’t going to blow off as fast as I like,” mentioned Watt. “Starting second I figured we were going to fade early with the set-up we had on, so we quick went back and changed some stuff around and I almost didn’t make it back out in time. The changes we made freed the car up enough early on so we were able to hang in there.  Then when the track started to go away we were able to come back up a little bit. With the 358 motor we had to keep it wound up there and it worked out for us tonight. It’s pretty cool that a big-block won the race with an open small block (Brandon Grosso) finishing second and we were third with our spec motor. All in all, we had a good night and we’ll move onto Georgetown next Tuesday.”