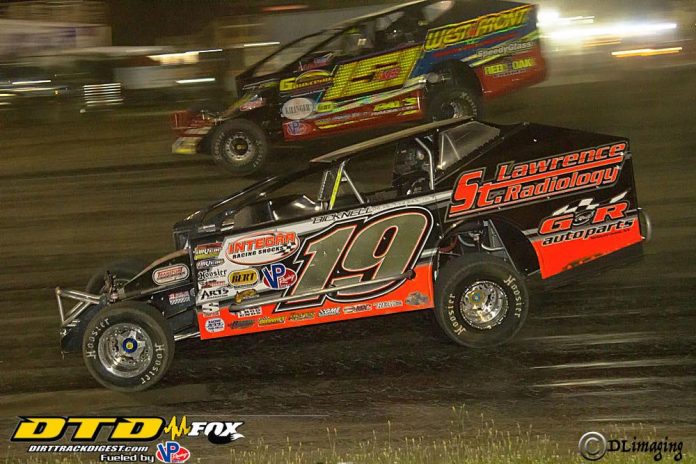 Tim Fuller used up every possible lap in winning Thursday night’s Race for the Cure 150 at the Cornwall Motor Speedway. The Edwards, N.Y., driver made his pass for the win through turns three and four on the final lap.

It was a thrilling victory for Fuller as he passed his teammate Michael Maresca in order to get the job done for the $12,000 payday. It was his second win in the 150-lap affair with his first coming back in 2017.

“I’ll never forgot what Michael said,” cited Fuller afterwards. “It was a couple years ago and he thought I let him go. He told me, ‘don’t you ever let me go.’ I’ll never forget that. It was good. It worked out right for us.”

Traction off the bottom of the corner was key for Fuller. It seemed like he flipped a switch in the final five laps of the race. He was running behind both Maresca and Mat Williamson. Once he found the groove down low there was no stopping his progress forward.


“There was a lot of bite down on the bottom, but you really had to crawl right down low and slow down to hit it,” said Fuller. “There was a ton of traction off the corner.”

Passing his teammate and good friend Maresca wasn’t ideal, but it was a bi-product of the traffic that he was caught in late in the race. Fuller believes traffic was the difference maker as in open track Maresca had the superior car.

“He just got hung up in lapped traffic,” stated Fuller. “I told him he got screwed as the leader. When you are in second you are the catbirds seat. I wouldn’t have moved if I was him leading. I would have stayed right there. He didn’t make any mistakes.”

The huge winner’s prize is a much-needed boost to Fuller. Fuller was forced to take some time off as a result of an injury and surgery. As a professional race car driver, every pay check is important in the summer time.

“These are the ones you need,” commented Fuller. “I missed a month of racing in July. I have to make up for lost time. That’s why I went to Middletown. It was offering such huge money. I had to do it. I hadn’t been in my big-block for five or six weeks. I’m trying to pick and choose now where I can recoup some of that money. Missing a month of racing is tough.”

Although he got beat in the final turn on the final lap, Maresca handled it with class. The 24-year-old didn’t complain or get upset. He made a mistake, owned it and is ready for the next challenge moving forward.

“I just made a mistake in turns one and two,” stated Maresca. “I floated out a little too much. I heard him and had a feeling that he was going to poke his nose. I could see it a little bit going down the back chute. Then, when I went to block him, that messed up my whole turn.

“There wasn’t enough stuff to lean on leaving the top to pass him back. Good job to him. That’s cool he won. It would have been nice to win $12,000, but second is pretty good running against these guys.”

If you had asked Maresca only a few years ago how happy he would be to finish second in a major paying race he would have been all for it. He’s come along ways since he started dabbling in Modified races. He was happy to be disappointed that he didn’t win.

“I think the fact that I’m a little upset is good thing,” mentioned Maresca. “It’s showing that I’ve matured. I’ve learned a lot behind the wheel to stay focused and hit my marks. I’m pretty proud of that. I’m pretty proud of the car. I’m proud of the team. Looking back, when you put it in perspective, it’s pretty cool. I’m young compared to these guys. Tim’s got a lot of experience; he knew exactly what to do.”

With that disappointment comes optimism that a win in a big event is right around the corner.

“I’m hoping we can knock off a win at a big race this year or maybe next year,” said Maresca. “I’m sure once you win the first one it is a lot easier to win the second one, just like anything.”

Fresh his $100,000 win at Orange County, Mat Williamson was back at it on Thursday. Williamson led some laps, fell back to the backend of the top five, rebounded to challenge for the lead again before ultimately finishing in third. Williamson was pleased with the outcome as he didn’t feel like he had that good of a race car.

“We weren’t that good,” said Williamson. “We tried the same thing we did the last time he came here and ran really well with it. We had a little too much stagger. It’s just weird. Sometimes you can hit it on the head and sometimes you can’t. Tonight, we just missed it a little bit. Those guys are in front of us were really good.”

Heat winners included Williamson, Gary Lindberg, Luke Whitteker, Maresca and Steve Bernier. Steve Bernard and Alain Therrien won the consolations with Alex Therrien winning the Modified win in your in 12-lap race to get final spot in the show…

Lance Willix had problems in hot laps and never recovered. He failed to run his heat race or his consolation…

Mario Clair, Carey Terrance and Kyle Dingwall split the bonus money of $2,000 from Seaway GM for being the top three finishing weekly campaigners in the field.