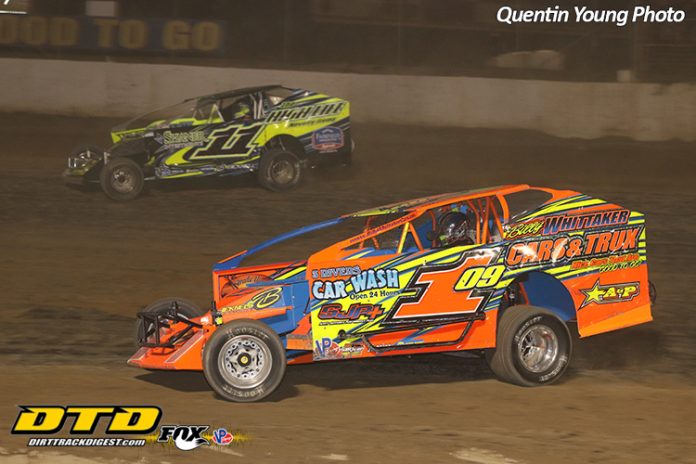 After a nine day vacation that took me 2,900 miles round trip I was finally home and able to get back to my regular job a week ago. Just two days later I was stopped at a red light on my way to work and got rear ended hard enough to activate the passive head restraints. That wasn’t quite how I wanted to start my Wednesday. After getting checked out I was told not to go to work so I took care of the insurance claims and other things.

Friday I was at Brewerton and Saturday I was at Fulton, but by Sunday afternoon I was in icepack mode so I had to miss one of the best shows Utica-Rome was able to run this year.
Chris Hile became one of only two drivers to win more than one Tracey Road Equipment DIRTcar Modified feature at the D-Shaped Dirt Demon this year. Twelve features this season have yielded 8 different winners. I believe that makes a more fan friendly atmosphere because it could be anyone’s race on any given night.

The night began on a “hammer down” racetrack with a holdover DOT Foods DIRTcar Sportsman feature from the week before. Rich Townsend was able to claim his first win this year to start the night out right. Mike Mullen won the holdover US Air Force Mod Lite feature. Casey Sykes won his 5th Mod Lite feature of the year in the regularly scheduled night cap.

Chris Bonoffski was able to win the holdover 4 Cylinder feature, with Ray Bechler winning the regular feature. Chuck Powelczyk was crowned as the 2019 4 Cylinder track champion.
The regular Sportsman feature went to defending division champion Kevin Root. The B-Main was won by Tyler Murray. Several wrecks in the Sportsman division throughout the night caused a big change in the point battle.


Fulton was host to a pair of demolition derbies after the regular show that brought a really good crowd out for the night’s activities. The fans were also treated to a lady’s race featuring the six regular female Sportsman competitors in a five lap shootout. Keirra Backus was able to take the lead and hold off all of the more experienced drivers to claim the victor’s purse.

Rich Christman was victorious in the E&V Energy Novice Sportsman feature that accompanied a series of exciting main events in every division.

Kevan Cook led most of the 20 lap Billy Whittaker Cars and Trux RUSH Late Model feature to claim his first win of the year.

Paul Owen won a cool thousand dollars by besting the 4&6 cylinder Chain and Bang demo derby, while Kiane Russell was able to conquer the Small Truck and Minivan derby to win $750.00

I regret having to miss being at Utica-Rome for one of the largest paying Sportsman races in history. Congratulations to Kyle Inman for the win.

Next weekend Brewerton, Fulton, and Utica-Rome will be crowning their track champions. The Lucas Oil Empire Super Sprints will also be on the card at Utica-Rome. On September 2nd Weedsport will be opening the gates for a Labor Day Double Play that includes the Super DIRTcar Series Modifieds, Lucas Oil Empire Super Sprints, and DIRTcar Pro Stocks. I’m looking forward to being at each of these shows.

In the aftermath of the accident I was in last Wednesday I had an opportunity to show the young man that ran into me some kindness and compassion. Based on his reaction I’m sure he was expecting a different reaction. I feel it’s important to care more about people than stuff. My car can and will be repaired.

The adrenaline rush I experienced masked some soreness so I wasn’t as concerned about myself as I was his state of mind because he’s just getting started at “adulting” and could only see dollar signs. I guess my stance on this is to practice what I preach, literally. The message I was preparing to deliver on Sunday was about being a partaker of God’s divine nature of love, by both loving Him and loving people. One of the foundational scriptures of my message was written by Jesus Christ’s closest personal friend, the Apostle John.

1 Corinthians 13 breaks down what this kind of love looks like. I recommend you take time to read that short chapter in your favorite bible translation.

At the close of my message I made a statement to stir the hearts of those I call my church family. Read this carefully and see if it causes you to search your heart. I said “it is not our job to determine what people are worthy of love, our job is to love people to reveal their worth.”

Eric Clapton and Steve Winwood wrote a song several years ago called “Higher Love”. As the second verse indicates, they hadn’t found the source of such a high love yet, as Steve sang:


Jesus Christ said it this way:

There’s a deeper love available to us that should become a flow through us. God’s love is unconditional, which means it’s not based on anything, period. He chooses to bestow His love on us regardless of us. That’s the deeper kind of love He wants us to walk in toward one another.

John wrote a lot about the love of God, and in this verse he revealed God’s love is found in relationship. To “keep” in this context is to hold such a high value of something that you set a guard over it to prevent it from being stolen from you. Jesus said “if you love me keep My word.

“But whoever keeps His word, truly the love of God is perfected in him. By this we know that we are in Him. He who says he abides in Him ought himself also to walk just as He walked. I John 2:5‭-‬6 NKJV”

Being perfected really means to develop to full maturity in God’s love. We don’t need to search too far because the Father said “And you will seek Me and find Me, when you search for Me with all your heart. Jeremiah 29:13 NKJV”

Knowing God’s love come by knowing Him. Relationships are based on fellowship and experiences. Receiving God’s love begins by asking Him to flood your life with His presence to help you turn it around in a way that He’s pleased with. He’ll empower you to turn away from anything that displeases Him, and pour our His love in a tangible and powerful way that will cause you to always want more.

Have a great week and I’ll see you at the races. If you’d like to reach us email us at
flchaplain@windstream.net or look us up in Facebook at Finish Line Chaplain.