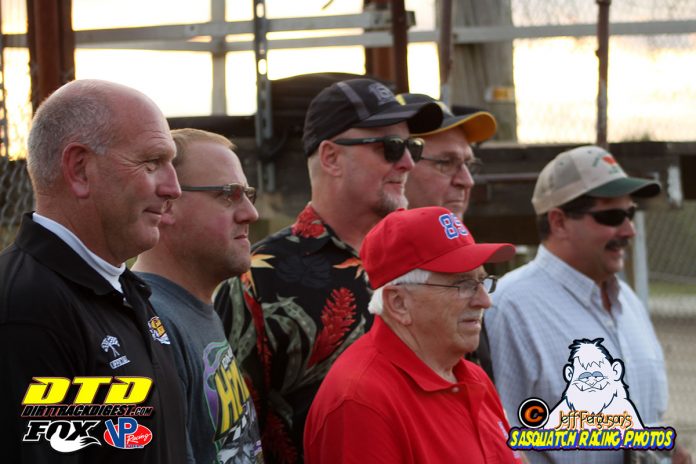 We had a great talk with third generation driver, Justin Holland who drives the familiar No. 280.  We’ve been around so long that we remember his father, Loren, Jr. and grandfather, Loren.  The opening show on Friday night at Afton Motorsports Park was the delayed Modified feature from August 2.  The feature had a number of leaders and with a couple of laps left, Justin took control and came home with his first win of the season which has been a short one for the Holland team, this was only their fifth time out.  Justin also had a second place finish in the July 27, Heath Memorial at Five Mile Point.  We spoke with Justin’s wife, Amy who still had the winning smile on her face.  We didn’t bother his father, as he was lying on the ground making adjustments to the rear wheel assembly.  Great to see a family still going for the checker after all these years. We stopped by Mitch Gibbs pits, we heard he had taken some time off for health reasons.  It was good to talk with him and we mentioned we remember him starting as another of Jack Johnson’s proteges.  Mitch said, “That was some 40 years ago.”  These days Mitch is competing with his son-in-law, Brett Tonkin, last year’s Modified champion at Afton.

We also stopped to see Paul Jensen and joked with him about rubber tires on the cars when he began racing.  Jensen is one of the veteran racers at Afton and has been racing at area tracks for 45 years.  Former Utica-Rome promoter, Gene Cole dubbed him as the Smoky Yunick of Central New York.  Paul has 13 track championships at a half dozen speedways.  In 2016 he was inducted into the NYSSCA Hall of Fame. The kids leaving the speedway could be heard saying that it was the best night they ever had at Afton.  We believe it was largely due to the bike and backpack giveaway. Four backpack winner seen here, Isabel Suda, Sadie Petrie, Jillian Petrie and Victoria Suda.


A good crowd of fans were on hand at Ron Ford’s Afton Motorsports Park, the grounds were well maintained and any dust that did fly, didn’t get to the fan seats. With Fonda not in action, Saturday night found us at Glen Ridge.  It was an evening of first time winners along with a night to honor the Class of 2019 Hall of Fame, Bill Nelson, Denny Tilison, Bob & Rob VanAernam, Custom Bob Niemietz and Butchie Irwin. Andy Graves of Middleburgh found victory lane twice this season at Glen Ridge, first on August 10 and then again this past Saturday.  Andy drivers the Yurkewecz Auto Crushers Pro Stock No. 96 and has two wins, five top five’s and nine top tens this season.  Bill Yurkewecz of Fultonville sponsors the Pro Stock division at Glen Ridge and is there each week to cheer on the division.  At the end of the 2018 season Bill decided to sponsor the class he enjoys so much.  Yurkewecz is a long time sponsor of The Ridge. Another local winner and favorite at Glen Ridge is Cliff Haslun of Sloansville who drives the No. 13 Street Stock and has garnered five wins this season at the track and ten top five’s and ten top tens. Cliff is also leading the Street Stock points. Bob Ogren became interested in lettering race cars at an early age.  When he was seven or eight he made the placards for BMX/Motocross bikes that he and his buddies raced at a small track across from his house.  When his Uncle brought him to the races he was also fascinated by the numbers and lettering on the cars.  By age 13 he was lettering mini stocks and by 14 he was racing them.  He did many of the cars of the group of mini stocks that traveled the Northeast tracks.  Today Ogren applies his artistry to vinyl at his business, A-1 Graphics, in Colonie, NY.

Coming up Saturday, August 31, Lebanon Valley will host Mr. Dirt Track USA paying $25,000 to win for Modifieds.  This event is a Super DIRTcar Series event and also the final night of points for Modifieds and Pro Stocks.