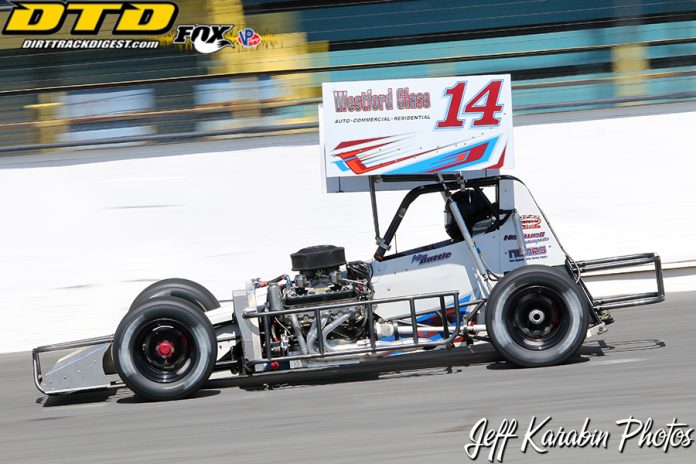 Battle had a weekend to remember with a track record setting time of 16.956 in Friday night time trials that earned him the eighth starting spot in the inverted 35-lap line-up.

After the ceremonies, he walked back to his pit sat down and talked about the weekend.

Jeff said, “It was my first time here and my second year of racing 350’s. Before that I drove a Pontiac Grand Prix 2.6 liter at Lee Speedway.”

Continuing he explained, “I came out here to have fun. I knew what we had to do and not get in trouble. This is an awesome track and I can’t believe that we came out and went that fast. This track you really have to be on the gas. You learn a lot quickly here as you have to use your head, give room to the other drivers and race with respect. I can’t believe I won here the first time out. It is awesome to succeed the way we did.”

The car he drove to victory has an interesting story as he said, “Brian Allegresso and Butch Rowley built the car for Dan Bowes about 20 years ago. It sat on a shelf for 10 to 15 years and my Uncle (Eddie Witkum) grabbed it.”

He feels they’ve been successful because, “We pay attention and do our homework. We don’t give up anything and focus is on week-to-week racing.”

In Sunday’s race he started eighth and chased down Stephen Duphily. The duo raced in tight quarters, but on the 15th lap he went inside off two, took the lead and simply departed from the rest of the field.

He said, “It was a little tight early, but about 10 laps in it got heat in the tires and began to loosen up.”

The 604 crate they run he feels might put them at a slight disadvantage, but “it is all about set up and all corner speed,” said the winning driver.

Duphily who finished second said, “We had a good car, but not enough at all for Jeff. I’m not disappointed as I guess we were the best of the rest.”

Rich Eaton, third place finisher, was content with his weekend and noted, “We weren’t that far off and the car really wasn’t good the first 25, but came in late as the front tires started to dig in.”