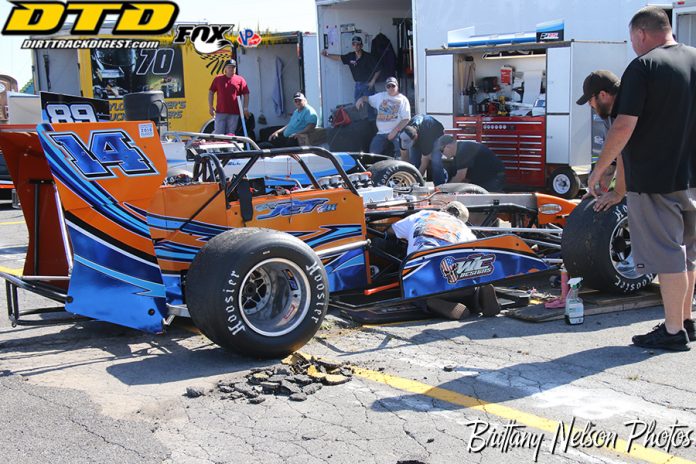 Bellinger and Abold in the front row of the Oswego Classic might seem old news, but the next generation sat up there on Sunday afternoon as Brandon Bellinger and Jeff Abold carried on their family legacy at the “Steel Palace”.

Prior to the event, Brandon talked about the new track record setting performance from Friday night as he said, “We were all happy and we are all really jacked up getting the new track record, but we need to race 200 laps and keep it in a safe position.”

The car is sort of unique as dad Ed Bellinger explained, “It’s an ‘05 Hawk and the motor has Morrison brains, but I put it together. The motor is an old motor that my son Trevor took out of an ‘88 Dually so we call it ‘Trevor’s’ Motor.” It was great to get the pole and I know we had left two or three tenth’s on the table during the summer, but we took it off this weekend.”

Jeff Abold was in a car built and designed by his family and in addressing the front row starting spot said, “It’s a nice view up there and much better than I am accustomed too. We’ve made some great strides in the past three or four races and that all transferred to this weekend. The car is eight years old and Enders does the motors for us.”

Sadly for both teams the win wasn’t to be as Bellinger pitted for a tire change and never could get going in the closing stages to get into contention. He ran second throughout the first half of the race, but eventually had to settle for sixth.

Jeff said, “It was a good car at the end of the race, but it just took way too long to get there.”

Bobby Santos III is a nationally known driver who is a formidable show in no matter what he runs.

He was in the Jeff and Laurie West owned No. 1 and in his first weekend in the car started in 13th.

However, it appeared the Dave Gruel 50 made contact with the 1 coming off the fourth turn sending Santos careening into the steel and destroying the machine.

Santos wasn’t injured and said he felt he “got crashed.”

He explained that earlier in the lap he was on the hubrail in one and Gruel might have felt that it was intentional. Santos said, “He swerved at me under the caution”.

Santos noted, “I really feel bad for Jeff and the guys as they have spent all summer long getting this car together.”

On the 18th lap Tim Snyder had a right rear blow, he went around and the red came out as Lou LeVea Sr., Todd Stowell, Bobby Bond, Brian Osetek were blocking the track in turn two.”

Joe Gosek, in his 40th Classic start, saw his nose wing get bent up early, pitted and came back on the lead lap only to get collected on lap 26 as Dan Connors, Hal LaTullip and Jerry Curren were all involved in a turn one accident.

Hal LaTulip suffered extensive damage as he got locked up with Dave Danzer and they plowed into the foam in three on lap 33.

Green was out from 42 to 103 when yellow came out for debris on the front stretch.

Lap 158 was the six lap yellow for the Santos crash.

Otto Sitterly was third and had a suspension part fail with nine laps to go.

Allison Sload was in the top eight when fuel ran out.

Aric Iosue was throwing sparks and slowing down by lap two.

Keith Shampine had the oil pan come loose and it was dragging on the track. Quick repairs were okay to get him back out.

Joey Payne in one of the sharpest supers in the pits had fuel issues in a qualifying spot in the semi, dropped out and was a non-qualifier.

Dan Kapuscinski was in the back up Tyler Thompson ride, was supposed to start on the front row, had a problem at the start and was relegated to the rear. He was moving forward when coming off two the car went around and the right rear hit the hubrail sending the front end high into the air and finally coming to rest on the top of the hubrail with the tire sitting on the grass. He also was a DNQ.

There were inverts in the 350 and Small Block Super events.

In the 350 main eventual winner 18 year old Jeffrey Battle Jr. came from eighth and took the lead on the 15th lap of the 35 circuit event.

Vic Miller’s grandson Stephen Duphily who was making his fifth visit to Oswego this year.  He finished just out of the top spot for the first time with a runner-up.

Richard Eaton rounded out the top three as he passed Bobby Timmons III in the final laps.

The lone mishap saw Matt Seavey and John Burke vying for third and fourth. Seavey slammed head on into the hub rail just before the start-finish line and shortened up the front end by at least two feet.

Burke came across the track from low to high and came to rest with just about a lane between himself and the wall. Fortunately the rest of the field single filed through that narrow opening avoiding any damage.

There were 22 Small Blocks and once again Mike Bond came out of retirement and in only his first race of the year captured his third Small Block Classic win.

Dave LaTulip, who was fourth quick overall, had a fire as a ground in his fuel cell caused an issue. The fire crew was right on the scene in the pits.

Anthony Losurdo ran up front most of the race only to see Bond run away after the pass for the lead.