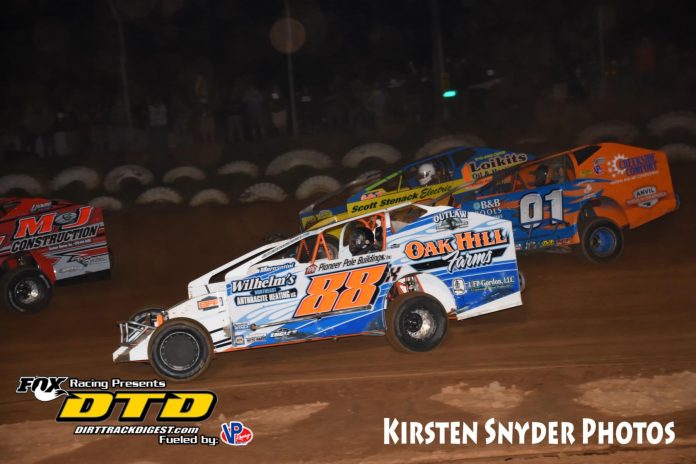 Friday’s race was just a precursor of what we would witness on Sunday as 2019 track champion Craig Von Dohren edged out Brett Kressley and Duane Howard for the $17,000 first place prize.

Track owner’s Jake and Jasmine Smulley gave the capacity crowd what they came for Sunday as the track was prepared to perfection allowing drivers to use multiple lanes on the new red clay as they raced around the 4/10’s mile dirt oval.

Von Dohren, Kressley and Howard had the crowd on their feet for the last 20 laps as they waged war amongst themselves in a race that was run hard, but very clean as each of three drivers drove with respect for one another.

In the end it was Von Dohren standing in victory lane holding up the big $17K check. It has been quite the year for Von Dohren at Big Diamond as he ended the season with five wins to go along with the track title. It was also a profitable season as well with Von Dohren taking home in excess of $35,000 for the season. Von Dohren was also the winner of the two biggest races of the season in winning the “Money in the Mountains” to go along with his “Coalcracker 72″ victory.

“It was nerve racking, that’s for sure,” as a happy Von Dohren talked about the race in the pit area. “The track was really good tonight.  You could run the top, bottom, middle and it was just racy everywhere. Starting up front like we did and getting the lead early you just don’t know where to go.  I tried to run some different lines there at different times in the race. It did get a little sketchy with the lapped cars there.

“Brett was able to get around me, but I felt the top was a little too far around and I didn’t want to use my tires up. At the halfway break I thought we might be in trouble so I tried to conserve the tires and keep it down low and kept it straight to be able to make to the end.”

Things were not looking good for the Dave Dissinger owned No. 88 team coming into the Coalcracker as the team struggled the previous two weeks with Von Dohren not being able to crack the top five.  You knew with the big money on the line Sunday the team would be prepared.

“Ryan’s (Godown) been really good here all year and I knew if it wasn’t me it would probably be him, but the last couple of weeks we weren’t showing it so we freshened some things up and changed a few things and probably threw away some stuff that was still good, but for this kind of money you have to change everything.”

He added, “I’ll tell you, the competition is really tough here, Duane’s (Howard) been coming on strong lately. Ryan’s been fast all year and you have (Brett) Kressley coming in here tonight who’s like an outsider and he’s banging the top and it was really tough. I’m thankful for everything we got and for everybody who’s involved in this deal, Bicknell, Integra VP Fuels and all these guys that support me. I’m very grateful.”

Kressley Rides the High-Side for Second

Brett Kressley started out the season as a track regular at Big Diamond but when motor problems surfaced earlier this year the team was forced to park the No. 19K on Friday nights and regroup.

Kressley, who knows the way to victory lane at the Speedway with four career victories, returned on Sunday looking like he had never left. Kressley qualified easily in his heat race while being able to get into the all-important redraw. Starting in the ninth spot Kressley worked his way steadily towards the front entering the top five as the scoreboard clicked off lap 17. Not stopping there, Kressley kept it wound up on the high side and as the yellow was displayed for the lap 37 fuel break Kressley found himself in second.

“We gave it all she had there tonight,” cited a happy but disappointed Kressley afterwards. “Off the corners I could get a good run, but he could take the run away off the straightaways. I would fall back, gain a little, fall back again and then gain again. I thought we were pretty equal there at end.  Maybe his car was a hair better but it’s just so long here around the top.”

After the fuel break, Kressley kept working the extreme outside looking for a way to get by Von Dohren. Kressley would drive it deep into the corners on the high side and pull alongside the leader.  He just couldn’t get the bite coming off the corner to make the pass.

Finally, on lap 61 as Von Dohren was slowed by a lapped car, Kressley completed the pass to take the lead. Once in the lead, Kressley could not pull away as Von Dohren went by the lapped car and started to work back underneath Kressley for the lead completing the pass on lap 63 to take back over the top spot.  Howard also got by Kressley for second three laps later. Kressley kept it wound up on the high-side and was able to get back past Howard for second at the finish but ran out of time to make another run at Von Dohren settling for a second-place finish.

“Once I got past him, I should’ve dipped to the bottom,” said Kressley as he explained the pass for the lead then letting Von Dohren get the lead back. “I think my car was better than I knew on the bottom, but I just wanted to stick with what got me there.  So I went back to the top and I guess that is what probably cost me. We had a good car tonight thanks to the crew, and we look forward to coming back here next year.”

Duane Howard and the Norm Hansel No. 357 team did not have the success they had in 2018 at Big Diamond when it came to wins, but the team has been steady as a rock all season long. The team did manage to visit victory lane once this season and has been a top five car all year. Howard, who is the career leader in Coalcracker victories with seven, once again was a driver to watch on Sunday as the team has been working hard to make their cars faster all year.

Sunday, Howard was on his game as he worked his way to the front looking like he had a car that could challenge Von Dohren for the win. Howard worked his way to second during the midway portion of the 72-lap race and looked to have taken away the lead at one point only to have the caution come out negating the attempt. After that, Howard still put the pressure on Von Dohren but also now had to battle Kressley for second. Howard made his way past Kressley with six laps to go and was challenging Von Dohren, but just didn’t have enough left in his car to make the pass. Howard lost second to Kressley on the last lap having to settle for a disappointing third-place finish.

“I really thought we had the car to win tonight,” explained a disappointed Howard as the No. 357 was going through tech after the race. “I thought we had position on Craig that one lap right before the yellow came out. We timed it just right, but the yellow killed our chances there. Starting spot was crucial.  I thought if we could’ve have started in the lead, we could’ve stayed in the lead.

“It just didn’t work out right for us tonight. We were really starting to roll good through the middle of the race and like I said I thought I had Craig, but the yellow killed us. I tried to make a charge there with about 10 to go but we just didn’t have enough tire left to be able to pass him. Lapped cars made it interesting there at the end.  We just didn’t have enough left. I really wanted to this one bad, but we just came up a little short.”

Rochinski, in his first year as a regular competitor at Big Diamond Speedway, has improved each and every week all season long. Bringing his car to practice on Friday night, the No. 20R looked dialed in and continued to look that way on Sunday as he easily won his heat race. Starting on the outside pole in the feature, Rochinski was primed for a good run in the 72-lap main-event. Unfortunately for Rochinski, something would break on lap one forcing him to drop out of the race relegating him to a disappointing last-place finish…

It was an all-around bad night for the Pauch family as Billy Sr., failed to qualify for the race and Billy Pauch Jr., suffering a flat tire on lap 25. Pauch Jr did manage to return to the race ending up with a ninth-place finish…

Young teenage sensation Alex Yankowski had the crowd on the edge of their seats early in the main-event as he rode the top-side from his twelfth starting spot to second and started to challenge Craig Von Dohren before a yellow ended his charge. On the ensuing restart Yankowski made a mistake in turns one and two allowing multiple drivers to get by dropping him back in the field. A few laps later Yankowski would suffer a flat tire ending his hopes for a win…

Nice to see Richie Pratt Jr and Neal Williams make the long haul up to Bid Diamond to compete. Both would qualify with Pratt finishing eighth and Williams finishing 18th…

It was a very disappointing race for Ryan Godown. Godown along with Von Dohren had to be the odds-on favorites to win this years Coalcracker 72 as they have been the two fastest cars for most of the year at the speedway. With Godown and the Searock Fabrications No. 26 team committed to running the Super DIRTcar series in 2019 the team was not originally planning on running Sunday’s race due to an SDS race at Utica-Rome. With team already being up in central New York on Sunday, the word came down around 1:30pm that the SDS race at Utica-Rome was rained out. The team had their Big Diamond car prepped and ready to go and already loaded into another trailer.  The call was made to bring the car to Big Diamond and the Searock team would head down from New York to meet them there. Arriving around 5:30 or so, the Searock team was ready to roll and chase the $17,000 first place prize. A solid run in his heat race put Godown into the redraw and he would challenge early on but faded in the latter part of the race to finish seventh. Definitely not what the team was looking for…

Finally, kudos to Jake and Jasmine Smulley for putting up that kind of money for this year’s race. I was a little disappointed that some teams didn’t take part on Sunday and hopefully next year there will be no conflicts with other series allowing more drivers the opportunity to compete…

Would also like to give Jake Smulley a shoutout for preparing a perfect track to race on both Friday and Saturday. The track was tabletop smooth all weekend with hardly any dust at all…