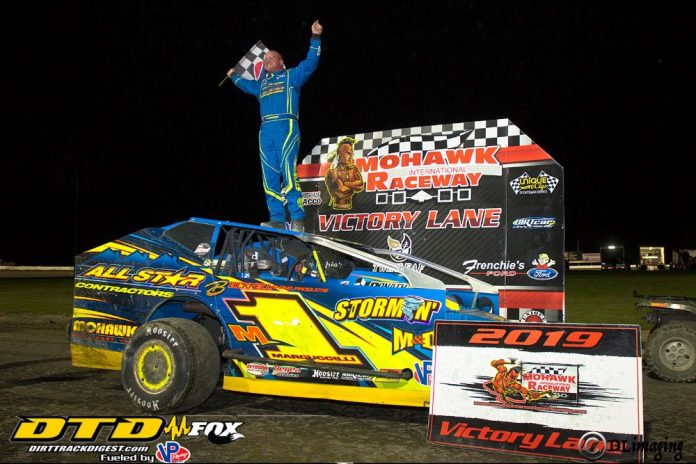 The points’ battle got a little tighter after this past week’s 358 series race at Mohawk International Raceway.

With several top drivers fulfilling their commitments with the big-block Modified Super DIRTcar Series and those who did not attend the event at Mohawk, this left the door wide open for those chasing to move up in the points’ battle.

Dave Marcucilli dominated the night rate out of the box, taking home his first-ever series win. This result moved him up to second in the points just shy of points leader Erick Rudolph.

I asked Dave his thoughts after his win at Mohawk and the game plan moving on to Super DIRT Week.

“I am still shocked that we even won a series race because we haven’t been good enough on the series to contend for a win,” stated Marcuccilli.  “The plan is to run the rest of the series races, so it’s gonna be a busy week during Super Dirt Week. We switched to coils about a month and a half ago and we’ve run well since.

“This win most definitely helped out money-wise going into to DIRT Week. I think I’m slowly getting better as a driver, but I still have a ways to go if we are going to run with the top guys all the time, but with any luck, we can keep the momentum good as we move forward.” Cory Wheeler has been one of the most consistent drivers on the series and after this past weekend’s results, Wheeler has moved up into the third spot in the points’ standings.

I ask Corey for his thoughts and plan’s for DIRT Week.

”We have been fairly constant so far in the series,” cited Wheeler.  “Going into Super DIRT Week we are looking to remain with the season plan of being constant, and hopefully staying out of trouble on the track. We are going over the car from top to bottom so we can hit the track running at Utica-Rome Speedway, the first of three satellite races.

“The second race will be Weedsport, always a fast track, but the one race everyone strives for is the Hurricane 100 at Brewerton. This is probably the most sought after wins by most drivers and we would love to win there.”

Tim Fuller, like Marcucilli, took full advantage of the fact the top runners were absent at Mohawk and, after coming across the line in fifth, moved the veteran driver into the top five in points. At present, Erick Rudolph is holding a slim points’ lead over the top five going in Super DIRT week, but things will change drastically in the coming weeks. There are no conflicts with the 358 series for the next four events and with some of the big-block drivers getting behind the wheel of their 358s, the series is about to heat up in a big way.


As we move forward to the most intense week of racing during the season.  There will, without a doubt, be some jockeying in the points’ battle, along with some outstanding racing, keeping fans on the edge of their seats.