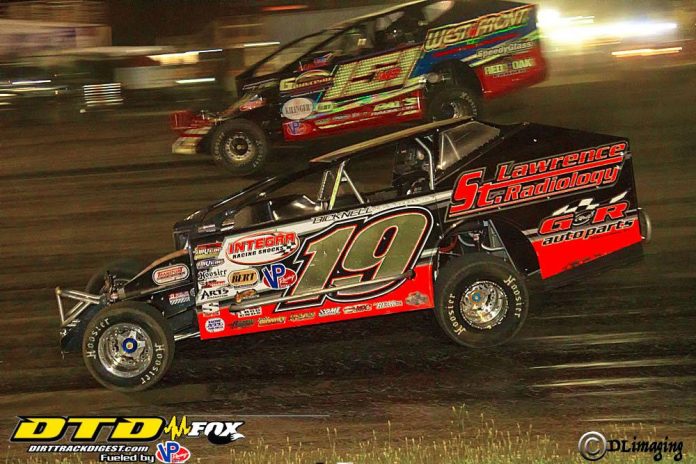 The final round of the 2019 DIRTcar 358-Modified Series is set to invade the Brockville, Ontario Speedway’s Loud & Dirty Brand Fall Nationals on Saturday, October 19, for the Bullringer 110.

The Brockville Speedway will come alive with the best DIRTcar 358 drivers in the Northeast, all challenging for the grand prize along with the crowning of this year’s DIRTcar 358-Modified Series champion. In a matter of weeks, the second annual Bullringer 110, with $10,000 prize money, will close out the 50th season of racing at the Speedway. This event will be run in conjunction with the Brockville Speedway’s Loud & Dirty Fall Nationals on Saturday, October 19.

Last season’s edition of the Bullringer 110 lived up to its name with several dramatic lead changes as the race unfolded. Matt Sheppard took the early lead at the start but was challenged after an early race restart due to a caution. Quebec’s Steve Bernard charged past Sheppard at the green taking the lead but he was quickly passed by Erick Rudolph who would then maintain the lead for the majority of the race. It would be the last 20 laps that would define the race as tire wear came into play.

In the end, it was Canadian Mat Williamson who took home the win along with the $10,000 in prize money.

This year’s Bullringer will be the closing event of 50 years of racing at the famed Speedway. The race will also see the crowning of the Ogilvie’s Auto & Fleet series championship, as well as the DIRTcar 358 Series champion. Also on the card, that day will be the Open 360 Sprint cars and a 30-lap Street Stock invitational.

This year will also be the tenth anniversary of the introduction of the Brockville Ontario Speedway’s Fall Nationals.

In 2009, one of the most significant changes came to the Speedway when Paul introduced the Brockville Speedway’s DIRTcar Northeast Fall Nationals. The Nationals came about after Paul began having a late fall race back in 2006.

Paul’s longtime friend Henry Boer recalls: “It was Paul’s brainchild. I just added to the brainchild. There was a desire to create a big, exciting multi-day event in Canada that featured a wide variety of classes. We also wanted a focus on the event as being a lot of fun, a good party for all attendees, which included entertaining people for two or three days, plus racing! But the racing would always be the main feature, obviously!”

The Bullringer 110 will live up to its name, as it did last season and is a fitting way for Paul and Cheryl Kirkland to close out the 50th season of racing at the historic track.

Start times are 5 p.m. sharp, with Time Trials Prior. There will also be an “Annual After Race Party.” The Loud & Dirty Brand Fall Nationals will also see the best in the Super DIRTcar Series Big-Blocks on Friday October 18 part of the two days of racing at the speedway.

This year’s edition of the Loud & Dirty Brand Northeast Fall Nationals, will close out an outstanding year of racing celebrating 50 year of history, the one race you won’t want to miss

For more information about this event, please visit www.brockvillespeedway.com or visit their F  acebook page for the complete schedule and event details.