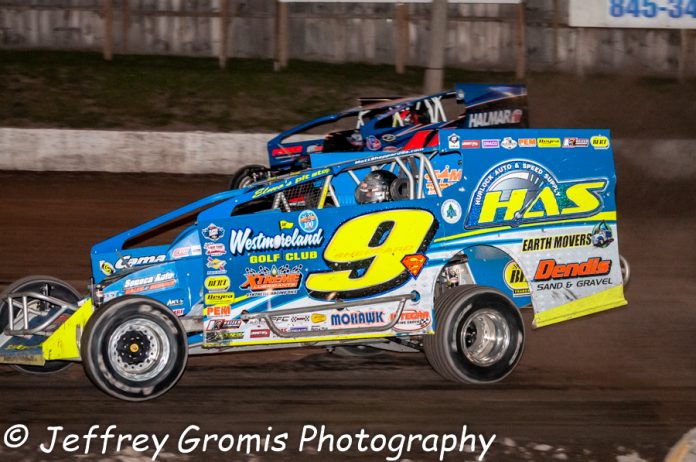 Stewart Friesen used nearly every inch of the racing surface on Thursday night at the Orange County Fair Speedway while on his way to winning the Hard Clay Finale for the Short Track Super Series North Region. Friesen ran his Halmar International No. 44 Bicknell as close to the wall on the outside of the speedway as he could, which worked out for him as he walked out of Middletown with a hefty $10,00 check.

“Since they put this clay down midway through the year here it just brought this place alive,” stated Friesen. “It was fun. You know it’s the first time we’ve been on the American Racers and the sail panels here. It was super racey. There was a good bottom. We were really good on the bottom to start the race and picking guys off and able to move around a little bit. Once we got to third, that caution came out and they said the 91 (Billy Decker) was fourth. I said to myself that he was in the consi and he must be way up there. I got up there after that. The cushion was alive and it was really good after that.”

Friesen got the lead by virtue of a tangle between the two front runners. Andy Bachetti and Michael Storms got together coming down the frontstretch as they looked to avoid a slower car causing them both to slow up opening the door for Friesen to make the winning pass.

“They got battling side-by side,” cited Friesen. “Andy got kind of squeezed. Storms got his left front in there and they kind of touched and we were in a good spot to sweep by both of them. It was clear sailing from there on.”

With a win already in his pocket, Friesen headed south on Friday morning to compete with the NASCAR Truck Series at the Martinsville Speedway. He hopes that endeavor goes as well as his run on Thursday as he attempts to make the chase finale at Homestead Miami Speedway.

“We fly out tomorrow morning for practice,” commented Friesen. “It’s a big race with the 52 team on Saturday. We’d like to win the race, but obviously we are racing for points right now. We want to give ourselves a shot going into Homestead. Weather permitting, we hope for solid racing Saturday at Martinsville and we can get back here to run the 44 big-block on Sunday.”

Sheppard One Race Away from Huge Payday

Matt Sheppard took one giant leap toward a $58,500 payday. The Waterloo, N.Y., driver finished fourth in the Hard Clay Finale locking up the Halmar North Region for the Short Track Super Series. He won the American Racer Cup as well checking two of the three necessary boxes toward earning the large check. All he has to do now is show-up and start the race at Georgetown Speedway to claim that title and his bonus.

“It’s weird, you talk about the North Series, but there was a lot more on the line than that,” commented Shepperd about his night. This North Series was very important. Talk about nerve racking. I draw 13, Andy (Bachetti) draws the front row. Everything I thought could go wrong, did go wrong. We prevailed in the end. It says a lot on this team. A lot of different stars had to align; a lot of different stuff went on this year to make this happen.”

Sheppard had a long night drawing 98 out of 100 coming in the gate before drawing 13 out of 16 for the feature. He dug his way out of the hole to finishing in the top five.

“We kind of had to scratch and claw everything we got tonight,” stated Sheppard. “A bunch of bad draws and it seemed like every time we got rolling the caution would come out and we’d go back a few spots. In the end we had a good car, got qualified and got into the top five. We did what we needed to do and it feels good.”

Sheppard needed to make the big payday happen. He hasn’t been able to seal the deal in any big races this year. He finished third in the Centennial Weekend race, came up light on the scales at Fonda Speedway losing out on $20,000 before wrecking out at Oswego Speedway during Super DIRT Week. This run was needed.

“It’s definitely nice,” mentioned Sheppard. “We’ve had a really good year everywhere we’ve gone, really good year on all the tours. It seems like we kind of got snake bit in all the big races with Fonda being light and Oswego we got in an accident and then an accident here and back to third. We’ve been looking for that big payday and haven’t been able to find it. We’ve had some bad luck or haven’t been good enough. This was will certainly help. It helps strengthen the program and helps get us through the winter. We keep building this deal and hopefully we come back strong next year.”