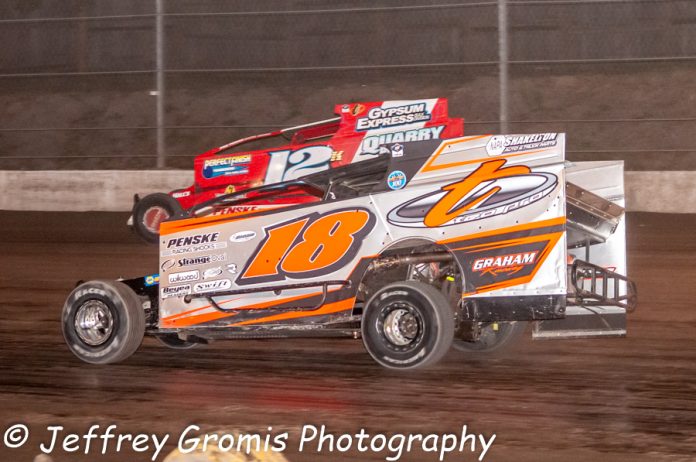 Larry Wight was surprise entry at the Hard Clay Open and even more surprising was the car he was driving. While the Gypsum No. 99L hauler sat in the pits, the trailer door never opened all night.  Instead, the Phoenix, N.Y., driver strapped himself into the Gary Simpson No. 12K out of Delaware for the night’s action. It had been rumored earlier in the week that Wight was the new chauffeur of the car formerly driven by Anthony Perrego.  Unlike most rumors in the racing world, this one proved to be true.

After getting a flat tire in their heat race, Wight was forced to qualify through the one of the three consolations races. Starting 26th in the main-event, Wight put on show for the fans running the extreme outside on the way to the front eventually settling into second place behind winner Stewart Friesen. Unfortunately for Wight, his good run was all for naught as the car failed to make weight after the race thus resulting in a disqualification.

“It’s sucks, but it is what it is,” explained Wight about the post-race disqualifcation. “It’s a car we really didn’t know much about. We’ve been thrashing on it all night long and making a ton of changes. We moved some weight around trying to get the balance where we wanted to make it better and we ended up being closer on weight that we anticipated. Unfortunately, we ended up burning more fuel that we thought. Obviously, we should’ve added some weight while we were moving it around.”

So how did Wight out of central New York end up getting hooked up with the Simpson ride out of Delaware?

“I have to give the credit to Dave Reedy (Penske Shocks Rep),” cited Wight. “He put the bug in Ricky Elliot’s ear, then Ricky got ahold of Gary (Simpson) and we were able to put the ride together. The plan now is to run Georgetown next week and then at Delaware International in a few weeks and then we’ll go from there”

Driving Bicknell cars for most of his career, Wight found himself back in a TEO car for the first time in a while.

“I’m not sure I would even call this car a TEO car right now,” joked Wight. “It’s kind of mixed breed with a bunch of different stuff on it. It’s an experimental car that Ricky Elliot has put a lot of R & D (research and development) into. I think we showed tonight that it has a lot of potential to it and now we just have to keep plugging away at it. I don’t think we had anything for Stew (Friesen) but it definitely has the potential to get a better finish tonight that we got.”

Anytime there is race at the Orange County Fair Speedway you have to consider Anthony Perrego as one the favorites to be in victory lane at night’s end. Thursday night at the Hard Clay Open was no exception as Perrego charged his way up to a solid second-place finish after Wight’s DQ in the Graham Racing No. 18.

After a bad draw in a heat race that was stacked with talent, Perrego failed to qualify relegating him to having to race his way into the field through the consolation.  He won that handily to start the race in the 25th position. In the main-event Perrego charged his way towards the front using every groove the hard clay had to offer.

“We got going really good early on and I think we were up to 14th already when the first caution came out, so I knew then we had a really good piece,” mentioned Perrego. “After the yellow, the car felt even better and then it seemed like the car just leveled out with the front cars. Larry got by us there on the outside, so I went up there to try it and we just weren’t as good up top as we were on the bottom.  I ended up losing another spot to (Andy) Bachetti. Luckily we were able to get back by him in lapped traffic and ended up second after Larry was DQ’d.”

Not qualifying through his heat and getting into the redraw made it a tough night for Perrego and left him wondering what could’ve happened if he was able to start further towards the front.

“It definitely makes it hard when you have to start that far back,” explained Perrego. “Tire wise it’s not an issue, but you have to make sure you can stay clean trying to get through there and fortunately tonight we were able to do it. Those top two guys were just a tick better than us tonight, but we gave it everything we had.  It was a good start to the weekend for us. The track was really good and it allowed us to put on a good show for the fans.”

Andy Bachetti knew what he had to do if he wanted to win himself another STSS North title and first on that list was to win the race. Bachetti was on his way early on as he led the first 16 laps before Stewart Friesen went by him on lap 17. After relinquishing the lead, Bachetti fell back to the fourth or fifth spot during the middle portion of the 50-lap race and came back on late to finish third.

“We had a good race car, my guys made all the right calls tonight and we were able to capitalize on our good starting spot,” said a satisfied Bachetti standing next to his car on the front stretch after the race. “As the race progressed, we started to get a little too tight, but we hung in there. It was a good race for us and the track was really racy tonight. I just hope our big-block car is as good come tomorrow.”

Hard Clay Clippings
A total of 88 cars competed in the eight heat races on the night. Interspersed in those 88 cars were some Sportsman cars trying to get some lap time along with some big block modifieds using tonight races as a test session for the 200…

T-Mac, Tim McCreadie made his debut in the Petruska Racing No. 66. The team elected to not race and just use the heats and consi as a test session so McCreadie could get himself acclimated to a Modified once again…

Ryan Godown’s night aboard the new Troyer TD5 didn’t not go as planned as the No. 26 overheated in his heat race forcing the team to sit out the rest of the night…
Tommy Meier finished second in his consolation race to qualify but was DQ’d after failing to make weight post-race…

For Pipersville, Pa., driver Danny Bouc, it was not only his first-time ever racing at Orange County but it was also the first time he had ever been there at all. Bouc looked good in his heat and consi but just didn’t have enough to make the feature race…