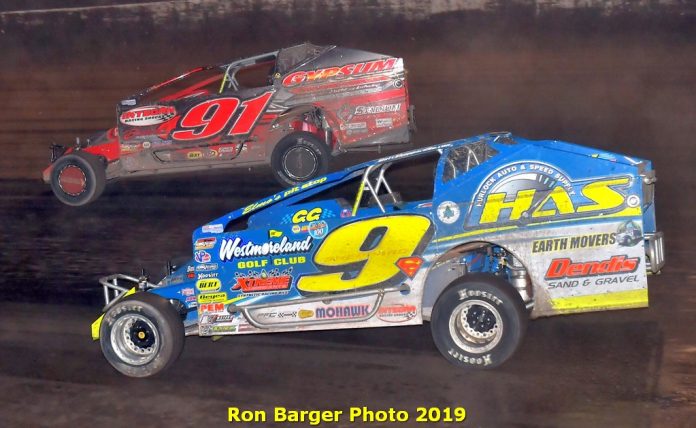 Turn the clock back to the day after the Centennial Weekend at Orange County Fair Speedway and Matt Sheppard was left to wonder if having a successful Eastern States Weekend was going to be a possibility at all after events that took place the night of the Centennial 160.

Fortunately for everyone involved, a meeting took place where all parties came together to resolve the conflict resulting in Sheppard’s ability to return to competition at OCFS. To be able to compete at the historic speedway was paramount to Sheppard in his quest for the Short Track Super Series North Region championship which when coupled with the STSS South Region championship along and the American Racer title will provide with a hefty bonus which will boost Sheppard’s total winnings to in excess of $58,000 at the STSS banquet in January.

Sheppard must still take the green flag in this weekend’s Mid-Atlantic South Region Series finale to guarantee title, but that is just a formality at this point. Come Saturday night around 8:00, Sheppard will be officially named the South Series Region champion resulting in his big payday.

Sheppard’s weekend began on Thursday night with the running of the Hard Clay Finale, knowing he just had to have a solid finish to clinch the title. Sheppard played it a little conservative side knowing what was on the line and at night’s finished a solid fourth to seal the North Region title. For a complete roundup of Sheppard’s night on Thursday click on the link to hear what Matt had to say about his run on Thursday night.

Once Thursday’s night mission was completed, Sheppard could now switch his focus to competing in the both the small-block and big-block races during Eastern States Weekend.

Friday’s big-block qualifying went off without a hitch as Sheppard easily qualified his Hurlock Auto & Speed No. 9S into the top 12 which locked him into Sunday’s big 200-lap race.

Saturday was the small-block portion of ESW and originally Sheppard had no plans to compete in that part of the weekend, but when the opportunity came along to pilot the Slack No. 3rs, he couldn’t pass up the chance knowing how competitive the Modified has been.

Sheppard was quick from the onset of hot laps and it continued in time-trials as put the car on the outside pole starting spot for the 100-lap race. The unfortunate thing for Sheppard was that the car on the pole was the No. 6 of Mat Williamson who has been on fire as of late.

“It was a good run for us tonight,” stated Sheppard. “It’s probably the only time I’ll get to drive this car this year. I appreciate these guys bringing it down here for me to drive. It was fast all night, but I don’t think anyone had anything for the No 6 car. Mat was in a league of his own so I guess you could say we were the best of the rest.”

At one point of the race Sheppard was able to sneak by Williamson as the duo raced through heavy traffic when Williamson was caught going a little too high through turns one and two allowing Sheppard to drive by.

With the preferred line on the track being the bottom Sheppard tried to stay down on the rail, but Sheppard was also bitten by the lapped traffic and slipped up the track allowing Williamson to retake the lead and never look back.

“The track really rubbered up on the bottom and you just couldn’t get out of the groove,” mentioned Sheppard. “It was pretty similar to the old Middletown to be honest. There was a lot of cars on it today and a lot of laps on it and just never developed a second lane. Like I said, it was a good run for us and I’m not disappointed with the finish.”

Sheppard, like everyone else, had to wait out the heavy rain that enveloped the speedway all morning and most of the afternoon on Sunday in anticipation of the “Granddaddy of the them all” the Eastern States 200. Once the skies cleared the track was determined to get the race going and the green flag was set to wave around 8:15.

Starting from the ninth position, Sheppard started to make his way towards the front at the drop of the green.  He had moved up to fourth in the running order when the team decided to make a pit stop on lap 39 for fuel only. The No. 9S was back on the move and by lap 70 had moved back into the top ten. When the leaders decided to make their pit-stops on lap 85, Sheppard now found himself running fourth.

When racing resumed it was a dog fight up front between Billy Decker, Peter Britten, Williamson and Sheppard. On lap 102, the foursome went four-wide going into turns one and two with Decker coming out on top and Sheppard now up to second.

Sheppard continued to run second to Decker until eventual winner Stewart Friesen went by on lap 126 relegating Sheppard back to third. Sheppard’s car was not good on restarts and Danny Johnson passed him for third after a lap 140 restart putting him back yet another spot. After almost losing fourth to Tim Fuller after another restart, Sheppard got just what his car needed and that was a long green flag run.

As the laps kept ticking off, Sheppard’s car started to pick up steam and with 30 laps to go he was running the fastest laps on the track. Sheppard had worked his way back past Johnson on lap 167 and immediately started to track down Decker for second. Come lap 180, it was now Sheppard in second, but by this time Friesen had opened up an almost eight second lead. Sheppard cut into the Friesen’s lead but there wasn’t enough time to track him down and came across the line in second to wrap up his weekend.

“The car was good tonight but just not good enough,” mentioned Sheppard standing next to his muddy car after the race in the victory lane pavilion. “I feel like it’s nice when you can improve on the car all weekend and we were definitely better tonight then we were earlier in the weekend.”

Sheppard went to explain how much better his car was on the long runs and how he just couldn’t get going on the restarts.

“It took me way too long to get going after the restarts, I fell back behind Danny (Johnson) and then (Tim) Fuller almost went by me after that one restart and like I said, it just took my car a lot of laps to get going. Once we able to string some laps together, my car really came on and I was able to get back by Danny and then was able to run down Billy (Decker) for second, but by then it was just a little too late. You can’t let the leader get a half a track in front of you and expect to be able to run him down.”

After having to endure a one lane track during Saturday’s 358 race, Sunday’s track was much racier due to all the moisture put down by Mother Nature.

“It’s amazing what Mother Nature can do for a racetrack,” stated Shepperd. “Yesterday it was just so hard and sealed over and it’s tough to get it right all the time and sometimes it takes a nice rainstorm and a nighttime race to make a good race out of it. We were very fortunate today’s weather what it was, at the race in August after the rain the track was much better. I guess Mother Nature dumping all that rain on the track today was a good thing.”

Now that step one has been accomplished in Sheppard’s quest to take home all the big money, Sheppard will now focus on steps two and three. Step two takes place this Saturday at Georgetown and like explained earlier in the story, that is just a formality.

Sheppard’s real challenge will occur in two weeks when he will battle Williamson for the Super DIRTcar series title and the big check that comes along with winning that title. Sheppard currently leads Williamson by a scant six points in his quest for his fifth consecutive and eighth overall SDS points title. Sheppard ended up taking home $30,000 for his two runner-up finishes over the ESW.

As always, I can be reached for questions or comments at dirtracefan25@hotmail.com or on Twitter @dirtracefan25