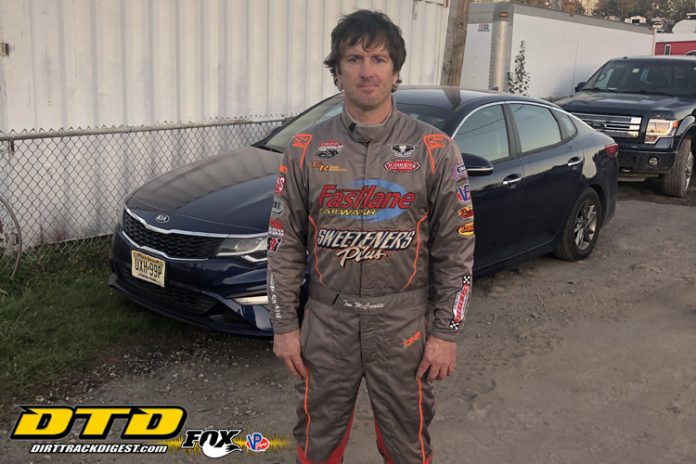 What once was a one day show at Orange County Fair Speedway in Middletown, N.Y., has grown over the years into a four day extravaganza with the first night dedicated to Brett Deyo’s Short Track Super Series (STSS) “Hard Clay Finale” event for the North Region championship. Wow, what a turn out of cars, 88 racers attempting to qualify for the 50-lap Modified feature paying a handsome $10,000 going to the winner.  It took eight heats and three consolations to put the 32 car field together.  After the driver’s meeting and the draw we spoke with Tim McCreadie about driving a Late Model then switching to the Modified and he said not running a Modified often enough does make a large difference.  Tim finished ninth in his heat and did not make the feature.

Spraker’s own, Stewart Friesen went on to win the 50-lap event and Matt Sheppard of Savannah, N.Y., took home the STSS North Region Championship paying $12,500.   Matt has 36 wins this season at 15 different tracks.  In the past eleven years he has averaged 26.5 wins per season. On day two at Orange County we had the official start of the 58th Eastern States Weekend.  A parade was a part of the day’s activities and down Route 211 came the cars turning onto Carpenter Avenue and back to the speedway.  From the crowd we determined it was a crowd pleaser and a way to introduce the racing at the historic track to the community. One benefit of a multi-day event is you have a chance to talk with people who normally might be too busy on a single day event.  We found Randy Williamson of Bicknell Racing Products out of Canada and started the conversation by kidding him about his son, Mat Williamson, switching from a Bicknell chassis and he quickly responded “not if he likes where he’s living.”  Randy continued, said they had thought it would be a learning year but they have certainly outdone themselves. His son Mat has been winning many of the big shows and taking home a lot of money to Canada.  He won the Super DIRT Week Billy Whittaker Cars 200 at Oswego just two weeks ago and became only the second Canadian to do it.  Our thought is we are just seeing the beginning of a very talented driver’s accomplishments.  We also spoke with Randy about his connection to Merrittville Speedway and his work with the Hall of Fame at the track.  One rule they have for their Hall of Fame is limiting inductions to three per year, so it doesn’t take away from the importance of the honor.  Randy also mentioned his connection to Dave Lape back in the day and time he spent in the Fonda area and his connection to the Friesen family and how they don’t forget their roots.

Saturday’s 100-lap event went well even with a short delay for rain drops.  The track preparation was outstanding under the guidance of Jeremie Corcoran and with Brett Deyo as Race Director things ran smooth and quickly.  The whole event was completed in one hour and ten minutes.  Top three finishers in Saturday’s event were winner, Mat Williamson, followed by Matt Sheppard and Brett Hearn.  Locally the 2JR of Ronnie Johnson of Duanesburg finished tenth, David Schilling was 11th.

Speaking with several drivers before the event they said it was a different ball game with the new surface, both Ronnie Johnson and Kenny Tremont said they had to work to do make adjustments to their setups for the new track surface on the 100-yea-old oval.  In the 50-lap Sportsman event Kevin Root was the winner with Grant Hilfiger second and Andrew Buff third. The final day of the 58th Eastern States looked like it might never happen on the scheduled day but when the hours of rain finally stopped the track crew headed by Corcoran aboard the grader and his crew on the packer trucks.  To most people it seemed like an impossible task, but after we talked with promoter Chris Larsen he assured us it would be the best race of the weekend.  Rain always seems to be able to water a track better than any tanker truck.  The new surface has changed the racing for the better as racers have many more grooves to race.  At times cars were in the turns four wide.  The race began at 8:00 pm and finished by 10:30 pm.  At the end of the 200 laps, Stewart Friesen stood in victory lane, after starting in the 44th position with his Halmar sponsored No. 44. Friesen wasn’t able to qualify on Saturday because he was at the NASCAR Gander Mountain truck series event in Martinsville, Va. but was added to the 200 lap event as a past champion.

We would also like to commend Doug Dulgarian, listed in the program as track management and is the one person coordinating the many extra activities for the fans at the track.  Poster of all the past champions was just one of the free items passed out throughout the weekend.

We want to thank columnist, Bill Utter for getting us a seat in the Carl VanHorn box with Steve Barrick, Bill Hanna and Melissa Lazzaro.

While we were in Middletown, Utica-Rome Speedway ran their Monster Mash Race and the Pro Stock winner was Josh Coonradt.  In the Sportsman event the top three were Chris Mackey, Brian Calabrese and Michael Ballestero and coming home in fourth was Schoharie’s own, ageless Jack Miller.

As we close we send our prayers to Kenny Hanson who is recovering from a stroke he suffered while at Eastern States.  We also send our condolences to the family of Fonda Speedway Hall of Famer, Jay Bleser who passed away October 26.