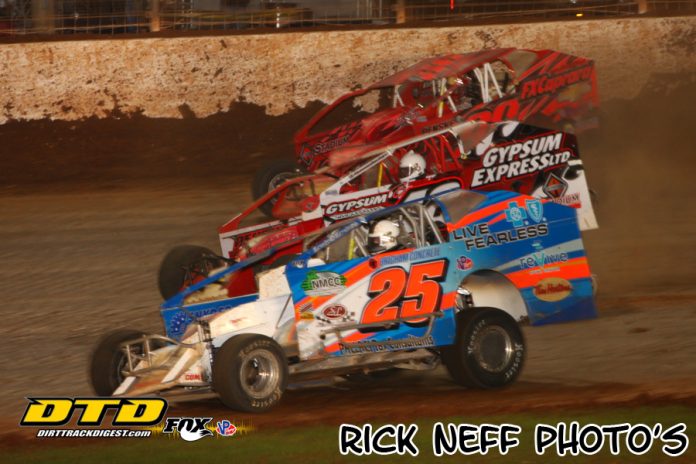 Erick Rudolph and Larry Wight are two drivers that are nearly always in the hunt when it comes to finding away forward and challenging for victories.  They are also two drivers that have struggled in the past at The Dirt Track at Charlotte.

Friday night both received a reprieve when they completed the podium behind eventual winner Jimmy Phelps.  Rudolph was extremely happy with his second-place finish while Wight was more than pleased to cross the line in third.   They both believed it was their best finishes at the facility.

“This is my best ever,” stated Rudolph.  “I’m not even sure I’ve been in the top five.  I have been coming here for a while too.  I just never really had the stuff.  Tonight, we had the stuff.  We had the chance and that is a true testament to the team.  We did our homework to try and come back better.  Jimmy had the car to beat tonight.  There were a couple contenders that maybe had a chance and ended up falling out.  We put ourselves in a chance to win and that’s all you can ask for you.”

Rudolph had a couple shots at Phelps on late restarts, but he just couldn’t fire the way he needed to get a run on him.  He’s struggled all season on restarts.

“I’ll tell you all year I’ve been a little down on the starts,” commented Rudolph.  “It’s something we got to think about during the off-season.”

Rudolph’s night started on the inside of the fifth row.  He got better as the race went on.  He felt like he found the rubbered-up lane quicker than some other drivers allowing him to march forward.

“It rubbered up a little bit and I was able to find it a little quicker,” stated Rudolph.  “I handled a little better in it.  Like I said, I’m really happy with the adjustments we made.  If we brought the car we had here last year, the same setup wise, I don’t think we would have run we had here tonight.”

Wight finished one spot behind Rudolph in his first start with a new configuration on the car.  Wight made the decision early in the day to switch from a car utilizing torsion bars to a car running coils.  It paid off with Wight having, what he believes, is his best run to date.

“Honestly, I think this is our first podium finish,” stated Wight.  “We’ve been close, but we always just missed that little bit.  I think tonight is just the same case.  Jimmy (Phelps) had a phenomenal car.  I think Billy (Decker) definitely had the winning car.  The lapped traffic there, everyone piling up into the wall, I haven’t gone over and seen Billy’s car, but it messed up quite a bit of stuff.   I think we were definitely a podium car.  We weren’t a winning car.  I think there is definitely potential to make it a winning car.”

Wight’s decision to change over the car took place in the morning.  That meant that they had to track down a few parts in order to make the swap.

“We decided to do it this morning,” mentioned Wight about going to the coils.  “Pat (Ward) had just about everything.  I had to chase down a left rear bracket from Paul St. Sauveur.  Luckily, he had it and let us use it.  I have to thank those guys.  It was a good car.  We just got to figure out what we did right and what we did wrong and try to fix what we did wrong.”

Wight has been resistant to make the change, but felt it was time to try something different.  They’ve had a good car for most of the season finishing in the top five while winning two track championships.  He was looking for that something extra.

“I got sick of chasing the coil cars,” joked Wight.  “There would be certain tracks where we’d be a lot better on the bars, but those tracks are getting fewer, fewer and fewer as the coils got better.  Honestly it was just time.

“It seemed to have a lot more traction.  Side bite wise, I think that’s where we were lacking.  I just didn’t have the corner speed like the other guys.   We had the forward drive that we’ve been chasing for the last couple months.  I think we are close; we just have to fine tune it now.”