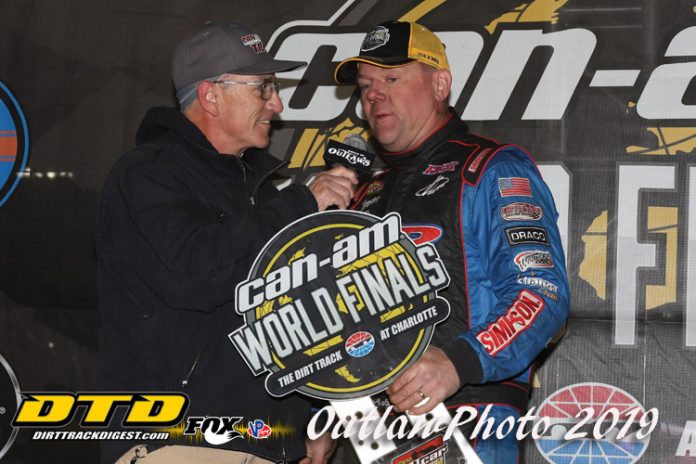 Jimmy Phelps scored a crucial win at Charlotte, taking the first 40-lap event of the World Finals. 2019 has not been good for Phelps, but a strong statement in the final weekend of the year gives the team solid momentum heading into the off-season. Like many have recently, Phelps switched chassis brands, hopping behind the controls of a Bicknell and seeing instant success.

“It was a tough year, not only on the Series, but even on the weekends we were lacking W’s as well,” Phelps said. “It was time we made some changes, and I’m tickled pink. We brought out this car at Orange County and we were really strong, and brought it here to a track we’ve struggled at for five, six years and ran as well as we did. I’m happy.”

One unique part of the World Finals is that the same program highlighted by a 40-lap feature is ran both Friday and Saturday. While a win is great, the weekend is only half over.

“We has a really good car tonight, but we got to come back tomorrow and work really hard. We’ll enjoy the win tonight, but it’s more relieving than anything. I want to get through tomorrow without anything bad happening or getting torn up, and maybe get up there and race for another one, because who knows after how good it was tonight. Everyone on the team deserves a run like tonight, it goes without saying that when you run bad, everyone is grumpy and a run like this will help us sleep better tonight and help us going into the winter.”

Phelps started seventh in the feature, quickly making it to third. From there, Phelps dropped to fourth, then got to second. Once in second, Phelps got the lead after Billy Decker blew a left rear tire on lap 22.

“I think we were on par with Decker,” said Phelps. “You know he’s a great driver and will keep searching around to get everything out of his car. It’s easy for me to say, but a shame we didn’t get to race it out together, because I think we were good enough to take a shot at him. We kind of saw his issue coming though with 38 cars, but too late to do anything different now. We weren’t restarting great, our carburetor was stumbling some, but I was welcoming the yellows just so we could stay out of that traffic. It got messy there for a while.”

After a season to forget, confidence at HBR was certainly not the highest it has ever been, but a win in front of a sellout crowd will always help morale. Does Phelps got his confidence back?

“For a while, a little bit,” Phelps stated. “I felt good coming into here, sometimes little changes make a big difference in your attitude, and so far it’s working. We still have a ways from where we want to be, and it sucks we have to wait until the spring to get there.”

With one more feature left this season, Phelps is on pace to end the season well. The final night of the World Finals has the second 40-lap feature of the weekend for the series.  It will be the first main event on the evening.