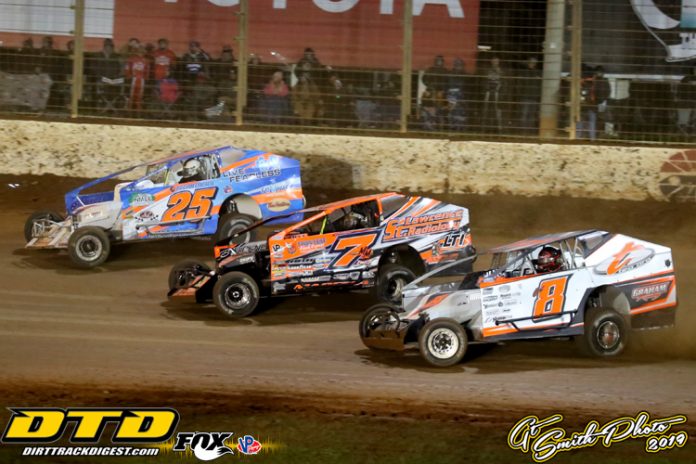 Michael Maresca and Max McLaughlin pulled the worst possible redraw positions to start Saturday night’s Super DIRTcar Series finale at The Dirt Track at Charlotte as part of the World Finals.  They both did what they could to move forward with positive results at the end. Maresca ended up third while McLaughlin finished in the fifth spot.

Maresca’s podium was his best result at Charlotte, an appropriate end to Maresca’s breakout season.

“It was alright, we redrew eighth and got to the front quick,” Maresca said of his race.  “It was tough to race with Matt (Sheppard). I just tried to keep my focus on staying out of the way while trying to win the race.  I tried to race it like it was a normal race because of the championship circumstances, I pretended it was a race in the middle of the summer.  I think that’s the fair way, I already messed it up enough for Sheppard and I feel like an a-hole about that. We are all good, but that is something I’ll never forget. I’ll never get in between a championship again.  I tried to stay out of it tonight.”

Soon after the initial start of the 40-lap feature, Maresca was an important part of the battle at the front of the field. For the better part of half the event, Maresca was putting heavy pressure on Mat Williamson, but ultimately settled for third.

“We were good, we started the rolling the top and I felt like we could win the race,” noted Maresca.  “I got clear of Williamson of there and we were racing. He slid me and I got out of the gas, I wasn’t going to mess up the championship or anything.  I got going again and found the extreme top.  I got Sheppard up there. Then I went to get Williamson up there and a lapped car was there. I drove through the hole and popped my tire and bent my shock.  That was the end of the night, I put up a fight. After that, I migrated back down to the bottom. If I didn’t hit that hole trying to pass the lapped car, I think we had a shot at winning the race.”

Maresca spends almost all of his time behind the wheel of a 358-Modified, and runs well in it. Even in open competition shows, Maresca often favors the 358 powerplant over the big-block, such as Fulton’s Outlaw 200 where Maresca beat many big-blocks with his small-block.

“I’m pretty happy because I think this is only my fourth time in a big-block this year,” Maresca said.  “I only run the support the division (team joke), pretty good for support division racer. It’s pretty cool to race in front of a crowd like that and to get third you get some money and recognition out of it.  It was a fun season, learned a lot and we’ll come out swinging next year. I’ll do the same thing as this year.  I’ll end up running around home while hitting some more big races. I sat at home for a few of them watching them, maybe next year we’ll go to couple if it makes sense.”

Another black and orange car showed speed at Charlotte, this car driven by North Carolina local Max McLaughlin. For this weekend, McLaughlin partnered with Graham Racing to field a car, but it was not McLaughlin’s first rodeo with the team. Back in April, McLaughlin was a last minute addition to the Graham stable for the Super DIRTcar Series opener at Can-Am, and McLaughlin bookended the season with another run at the World Finals. On Saturday, McLaughlin and Graham finished fifth.

“We got stuck hard racing with Rudolph,” noted McLaughlin.  “It took a few more laps than I thought it would to get around him.  By the time we made to it fifth we were just kind of stuck.  The leaders were a straightaway ahead. It took a while to took a while to get there, and once we caught them, we were out of time.  That is the problem with a 40-lap feature, you just don’t have enough time to get there. I think we were one of the better cars on the track.  We caught them from a straightaway back, but things just didn’t fall our way.”

McLaughlin showed similar speed on Friday night, battling inside the top 10 for much of the event. However, a broken transmission sent him to the infield with only a handful of laps remaining.

“We had a mechanical failure last night running about eighth or something,” McLaughlin noted.  “We struggled with handling yesterday so we made a lot of changes last night and this morning to accommodate for that.  We made the right changes and went in the good direction. I just wish we had a yellow at the end, they were all racing pretty hard early up on the top and I was saving my stuff on the bottom.  It was definitely good at the end of the race, it just didn’t fall our way.”

With multiple starts in Graham equipment and good runs, McLaughlin is unsure about any future plans with the team. McLaughlin was contracted to only make about seven or eight starts with HBR in 2019, but was able to add a few more with Graham.

“I have no idea,” McLaughlin said about any additional starts.  “Ray and I have become good friends over the years. He had the car sitting here so it was a good opportunity.  We didn’t plan on coming with HBR, it just wasn’t on our schedule. I got with Al Heinke and he gave me permission to come drive Ray’s car, everyone just gets along well.  Who knows what will happen in the future, we’ll definitely keep the door open and see what happens.”